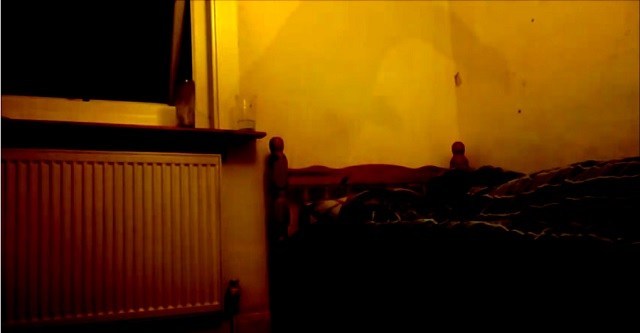 This video seems to show a man who has previously suffered from sleep paralysis. He had his bedroom light on at night and his camera was rolling, capturing a strange smoky cloud over his bed.

Mike Pike explained that during the playback, he noticed a spike in the audio – when reviewing the video. To his surprise, there was a dark cloud of smoke that resembled a figure of sorts.

Mike’s sleepless nights, have plagued him for a while and he has suffered from it. Mike wanted to know what was happening to him at night, so he placed several cameras in his room and captured this rather fascinating clip. It is subtle but a dark type cloud of smoke can be seen during throughout the video. He also said at night, a sense of dreadful feelings would come upon him. On several occasions, Mike felt like he wasn’t alone in his room.

Many have wondered what this might be. The video has been seen nearly 1.9 million times and was posted on the Altered Dimensions YouTube channel. For whatever reason, it seems that some people become a magnet for paranormal entities. Why this happens to select individuals is rather perplexing.

Mike went on to say, “I’m a rationalist and a very skeptical person with no previous interest in paranormal activity, but after doing some research it seemed like there was a possibility that this entity is real.”

“I have watched the footage over and over trying to figure out some logical explanation for what could have caused the image of what seems to be a ghost, but I haven’t been able to come up with a solution. I am really starting to believe that I captured the entity I saw during my paralysis on video. This terrifies me so much, that I can no longer sleep in my room.”

A condition known as hypnagogia (waking-sleep) can be the source cause of shadowy type people being seen. Even scientists have classified this rather strange condition. A person enters a dream-like state in their mind, yet they are consciously aware of everything happening around them.  Most often these people experience a sense of dread, pressure on their chest and visual images of shadow type entity around them.

Pseudoephedrine is an over-the-counter allergy and cold type medication, found in different products. This drug may produce hallucinations for some people.

Still though, this doesn’t explain the visual images capture on this video. Sure they could be faked but they could be real also. About half the people believe this is video to be real and it might well be.

In this article:hypnagogia, paranormal entities