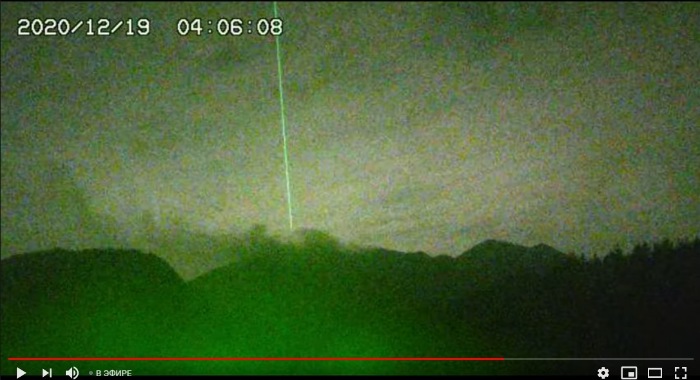 A strange “green beam” captured today from the Kyoto Live Cam at the Sakurajima volcano. In early October 2020, both a webcam and local residents filmed several UFOs of different sizes and shapes circling over the top of the mountain.

The event attracted attention to the volcano and people began to look at the live broadcast webcam more often. As it turned out, the observation gave a result and today such an anomaly appeared there:

This ray appears several times within an hour, so some kind of artifact is excluded. Unfortunately, the service has banned the viewing of videos on other resources, so we provide the LINK to the camera.

The record is stored for a little more than a day, so the beam will be visible for about 24 hours. Perhaps it will appear again:

The variant with some kind of drone, with the help of which the Japanese decided to arrange illumination of the volcano, is extremely unlikely – the beam is very intense and the UAV simply does not have enough carrying capacity to drag the power source.

In the video below you will see a strange “green beam” captured from the Kyoto Live Cam at the Sakurajima volcano 5 years ago, this occurrence lasts over 4 minutes, but some last a shorter period of time and some longer.

Some speculated the beam was coming from some type of laser  in order to collect scientific data and research does show that lazer technology does exist exactly for that purpose, although there was no any official statement saying that is what this is.

It was all about the same Sakurajima volcano, on which in November three meteorites fell in a row in three days. Since there are no such coincidences in nature, we assumed that inside the volcano there may be something like a military base and some competing company decided to bombard this base slightly, testing the air defense for strength.

As you can see, the adventures continue there, and in the light of the proposed theory, one can think that this beam is either some kind of air defense element, or a competing company sent a drone and decided to make targeting better.