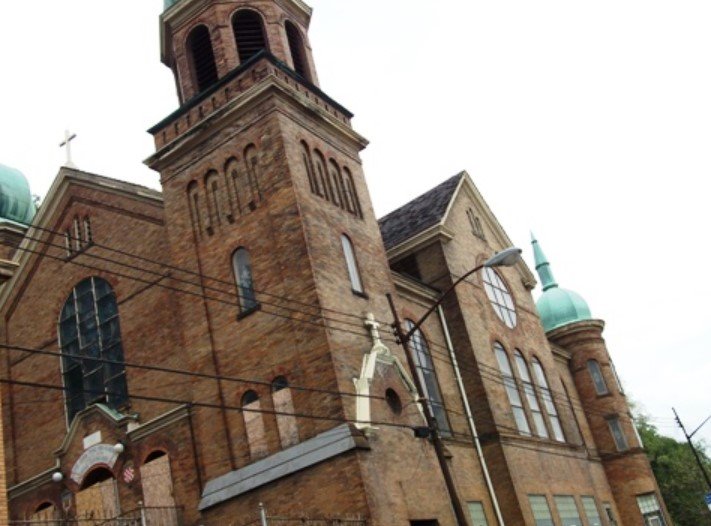 This story, of a ghostly priest in Saint Nicholas Croatian Roman Catholic Church in Millvale PA. is one of Allegheny County’s most famous tales.

The story began when an artist was hired in April of 1937 to paint a mural on the walls of the church. On the second night he was there he heard a sudden long sound come from the organ in the back of the church.

On the fourth night, he glanced at the alter below him and there was a figure of a man in black moving and raising his arms and making gestures in the air. The artist assumed it was the priest who hired him to paint the murals and dismissed the incident. Unfortunately, that was not the end of it.

On the eighth night at about midnight, the specter appeared again. This time walking slowly down the main aisle of the church, mumbling rhythmically as if he was “praying”. For a while he walked along the aisle, then disappeared.

This time the artist asked the priest if he had been in the church. The father had not – and had been asleep since nine that evening.

The following nights the priest decided to come into the church and stay with the artist until quitting time. The following evening the priest verbally taunted the specter with a summons to appear.

Soon the men heard knocks emanating from the back of the church. Soon after they saw an old man in black sitting in the fourth pew. He was there for a moment – then vanished. That night the priest also reported hearing knocks or clicks in his room.

As the artist continued his work the old man in black appeared again, this time moving down the aisle toward the altar where they saw him blow out the light of the eternal flame. In eight years that light had never been extinguished.

The spector appeared throughout the job-for two months, usually around eleven or twelve midnight. Sometimes he would burn candles on the chandelier in front of the alter.

Local people report that the haunting continues to this day. The current priest of St. Nicholas has said that his German Shepherds jump and bark furiously around something leading to the front door of the church, and always around 11 o’clock. He refuses to enter the church after a certain hour.

It is believed that the spirit of the old priest haunts the church because he stole money from parishioners and neglected priestly duties and has returned to make amends. Whatever the case may be, if you find yourself in Millvale PA, this is one church you may want to avoid.

In this article:Allegheny County, St. Nicholas