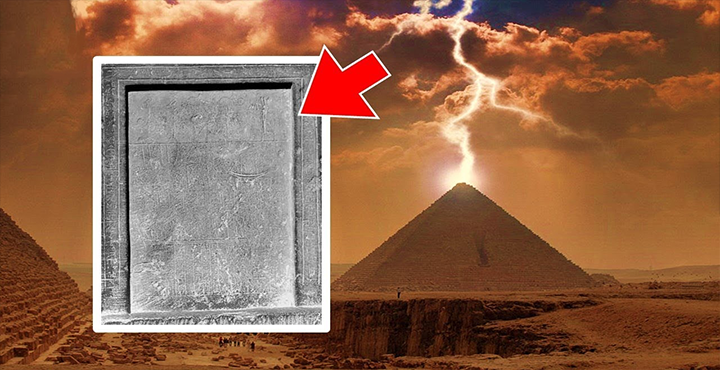 We have long stated that there is considerable evidence to suggest, that not only the great Sphinx, but also its accompanying pyramids found dotting the plateau, are far older than currently attested.

We have shared the premise that many of the ancient hieroglyphs found all over Egypt, are a mere 4000 years old, while the pyramids and the Sphinx, both conveniently absent any of these same illustrative writings, are far older than this age.

There in fact exists an artefact within Giza, an object that many a funded academic would rather not exist.

Once quoted as a “must see artefact” by Zechariah Sitchen, this inconspicuous stone, known as the Inventory Stela, amazingly, is an authentic inventory left by king Khufu.

It not only supports most of what we have now come to suspect regarding the plateau, a theory concluded from many different avenues of research, but it is a written description of the Egyptian civilisations activities upon the plateau, including what happened to the sphinx, or more accurately Anubis.

We have come to suspect, that many of the most popular alternative researchers, who have spent their careers researching these specific subjects, have, just like academia, ignored patently evident materials surrounding the ancient past.

Gizas inventory Stela, Zechariah Sitchen wrote in his book, “Journeys to the Mythical Past” that the stela was irrefutable proof, provided by Khufu himself, that he did not build the Great Pyramid, and that the Pyramid and Sphinx, were already there in his time.

Predictably, the stela is simply ignored.

However, some, like James H. Breasted, commendably included the Inventory Stela in his official list of Fourth Dynasty artefacts. Stating that regardless of opinion, that it, quote, “bore all the marks of authenticity”.

Also, the French Egyptologist Gaston Maspero whose most famous book, “The Dawn of Civilization,” stated that the stela was indeed a factual record of the life and deeds of Khufu.

Regarding the Sphinx, the text states that lightning once struck the head, destroying a large portion. Khufu then recarved the head into what we see today.

He then built his temple in the vicinity of the “house of the Sphinx,” and interestingly, renovated the Great Pyramid… Perhaps the source of the younger casing stones?

The stela inventory not only confirms many things we have already come to suspect took place within Giza, based upon our own research and evidence gathered. But additionally, this mounting evidence, is indicating to us that other, suspiciously popular, supposed in-depth investigations often accompanied by expensive trips to said sites, are deliberately in-accurate works of controlled opposition,