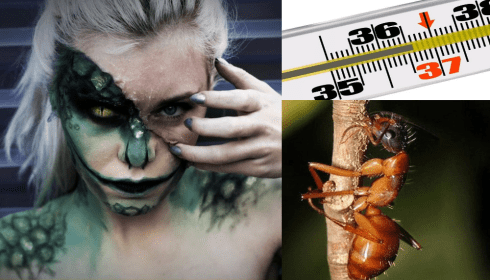 Even people who have nothing to do with medicine are well aware that a person’s body temperature is 36.6 Celsius, if measured somewhere at the periphery, and a full 37 Celsius directly inside the body. This standard 98.6 F (37 Celsius) was set by a German physician Karl Reinhold Augustus Wunderlich in 1851. However, as it suddenly became clear, something has changed over the past 170 years.

By regularly measuring the temperature of patients with new-fangled electric thermometers, doctors noticed for some time now that the mercury thermometers of the last century seem to be lying – the temperature of people somehow dropped and the net 36 Celsius is recorded quite often. Since people did not show any causes of malaise, all this was attributed to more advanced measurement methods.

However, as experts found out at Stanford University – Dr. Wunderlich was absolutely right, just modern doctors have become a little dumb.

Dr. Julie Parsonnet and her colleagues picked up piles of documents from data sets covering different historical periods. There were three periods in total.

The earliest recruitment was based on military service data, medical records, and retirement reports from veterans of the Civil Union Army. This is a record of the period between 1862 and 1930, and it included temperature measurements of people born in the 19th century.

The second set was taken from statistics from the United States National Institute of Health and Nutrition. It includes data collected in the years 1971-1975.

Finally, the third database was taken from a clinic at Stanford University and included a study of the temperature of adult patients who visited the clinic in 2007 – 2017.

In general, researchers have compiled a base of 677 423 temperature measurements, which turned into a mathematical model that interpolates the results over time. And the model confirmed terrible suspicions.

On the one hand, the researchers rejoiced because a scientific discovery was evident. On the other hand, when publishing the news of this discovery, it had to be somehow explained. And to explain all this is quite difficult, so scientists immediately put forward 33 theories that came to their mind.

The first theory is global warming. That is, the temperature of the Earth has increased and human organisms are struggling with this. The second theory is a change in diet. That is, the food has become more high-calorie and people no longer need to strain to digest it. The third theory is the widespread use of air conditioning and central heating. Well and so on and so forth.

Of course, it cannot be said that each of the theories is meaningless, but meanwhile, the scientists of the adepts have missed the most important theory, having forgotten about such creatures as reptiles. Their body temperature does not differ from the environment – this is how they are genetically arranged. But what if people introduce some reptilian genes? This is easy to do using the right DNA fragment and some kind of flu virus. A Spaniard passed across Europe, partly mowed, and who didn’t mowed got a new gene that produces some kind of protein that reduces the temperature.

It is not clear, however, why this is done, well, we don’t understand much about the place in which we live and the purpose of our stay here. Therefore, most likely this temperature trend reflects the fact of genetic manipulations that the owners of this world carry out with people. Well, in light of the fact that some reptilians control the world, as conspiracy theorists suspect, one must think that the owners decided to bring out a race of tame reptiles closer to themselves.

Another theory missed by adherents is the fungal theory. The fact is that a temperature of 36 – 42 Celsius is characteristic of ALL warm-blooded animals. And this is due to the laws of physics, or rather the properties of water, of which we are mainly composed. In the normal temperature range, water accumulates heat, so the temperature range between 36 – 42 degrees is convenient for warm-blooded creatures energy wise, that is, to eat less and not freeze. But apart from reptiles, mushrooms really dislike the temperature of 36 degrees, for them 35 degrees is the ceiling, the limit of survival, where somewhere on the nails of their toes they feel generally comfortable.

A mushroom that they call Ophiocordyceps unilateralis has long been known by the biologists. The peculiarity of this fungus is that it has the so-called adaptive manipulation. When an ant is infected by a mushroom, it makes the insect leave the colony, climb somewhere high on a branch and tightly dig its jaws into a leaf or into the bark. And after that, the mushroom eats the ant.

Further, since there are many such mushrooms, conspiracy theorists admit that all people are struck by some kind of fungus of the type that controls the whole world, perhaps even broadcasting some hallucinations to people about how they seem to live some kind of real life, while the victims are somewhere in a cocoon and they are being eaten there. In this case, the fact that parasitic fungi  lowered the human temperature to a comfortable level, confirms this theory.