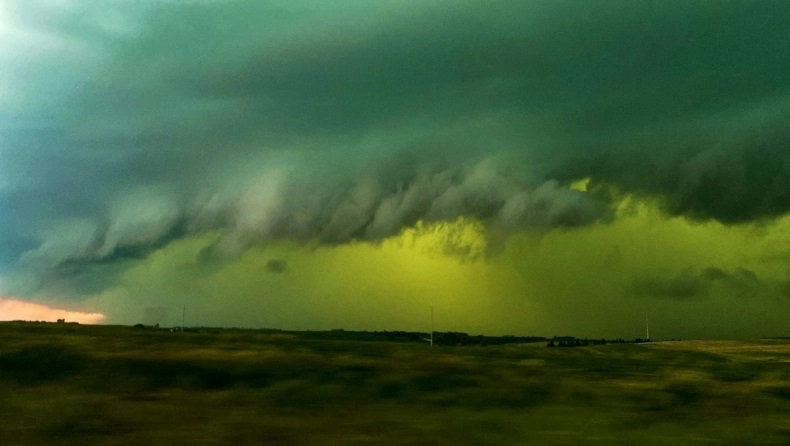 A rare phenomenon has turned the skies in South Dakota, USA, green, with residents watching in shock at this eerie sight.

The most likely version is that it can occur in the clouds during a long-lasting windstorm, with parallel thunderstorms and high electrical load, as well as water.

When clouds have a lot of water, then only the blue color passes through them – when this “mixes” with the red and yellow of the sun, then green can appear.

The phenomenon caused a scene that reminded many of thriller, or eschatological movies, while the winds “hit” South Dakota with 100 miles per hour.

30,000 households were left without electricity for several hours, giving an even more frightening dimension to the phenomenon.

“Although it is relatively common to see these green skies, especially over the plains, this time they appeared even greener than usual. This naturally caught the attention of many who had never seen such green skies. In this particular case, the green skies lasted for about 10 to 20 minutes as the storms approached the city of Sioux Falls.”

“Storms tend to occur later in the day because of the sun’s energy. The length of the day helps feed them. The sun appears redder later in the day as it approaches the horizon. However, light below a cloud appears blue due to scattering by water droplets. When the blue light is illuminated by the red light of the setting sun, it turns green. That’s why some storms have that greenish tint.”

Many were quick to share pictures of the green sky on social media, with one Twitter user writing: “Oh my god! Look how green the sky is before heavy storms.” Another said: “I’ve never seen anything like this. Green sky with a combination of blue.”

Peter Rogers, a meteorologist at the National Weather Service’s Sioux Fall office told the New York Times: “I think it caught a lot of people’s attention because the sky was this very unique green color. I guess that’s probably going to be a topic of discussion for a long time.”

In this article:green skies, rare phenomena