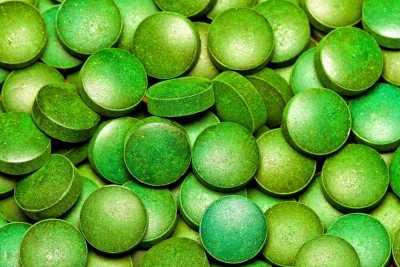 Pond scum is under-appreciated. Just looking at the green slime on your local pond may even make you gag. But you might want to get over that. The algae growing on the surface of still water everywhere could be the key to a healthy vibrant life.
Spirulina is a single-celled, blue-green algae that has been thriving on Earth since the beginning of life itself. Named for the microscopic spiraling helixes it forms, spirulina’s green color is derived from chlorophyll.
Its blue color comes from a pigment called phycocyanin, which has been shown to help increase the production of bone marrow stem cells and anti-cancer natural killer (NK) cells, as well as inhibit cancer colony formation.
Like plankton, spirulina is very low on the food chain, and converts sunshine to protein, fatty acids, carbohydrates and a multitude of nutrients that are essential to life on Earth.
Spirulina was considered a superfood and the primary source of protein by the Mayans and Aztecs for thousands of years. That’s because it contains between 65 and 71% all-vegetarian protein, the highest concentration found in any food.
It’s also a complete protein, meaning that it contains all of the essential amino acids as well as 10 other amino acids. This makes spirulina an excellent source of protein for building muscle, bone, strength and endurance, as well as balancing blood sugar and brain chemistry.
Because spirulina is eaten raw, it never loses any of its protein content, while about 50% of protein can be lost when cooking animal sources. The protein in spirulina is also four times more easily absorbed by the body than are animal proteins.
In addition to protein, spirulina is the best available source of gamma-linolenic acid (GLA) which is an anti-inflammatory essential fatty acid necessary for a strong immune system as well as nervous system health.
Spirulina thrives in salty alkaline water where toxins cannot survive, so it is a very pure food. And because it provides more than 100 nutrients, it is often described as the most complete food source. Among the many nutrients it provides are iron (as much as red meat), vitamin E, zinc, B vitamins, copper, calcium, sulfur and magnesium. It is also a rich source of vitamin A in the form of the antioxidant beta-carotene.
What are the proven health benefits of spirulina?
Studies have proven that spirulina has many health benefits. Here are just a few of the things spirulina may do:
– Promote stem cell genesis and protects against declines in neural stem cell proliferation
– Provide antiviral properties
– Fight inflammation and arthritis
– Favorably affect lipid profiles, immune variables and antioxidant capacity
– Relieve experimentally induced colitis
– Provide high concentrations of zeaxanthin, an antioxidant that may reduce the risk of cataracts and age-related macular degeneration
– Protect bone marrow cells from radiation
– Improve insulin resistance
How do you get spirulina into your diet?
You can buy spirulina supplements in pill form at health food stores but it can also be found in powdered form.
Powdered spirulina is easy to add to a morning smoothie, giving it a deep rich blue-green color. It can also be added to guacamole or salad dressings.