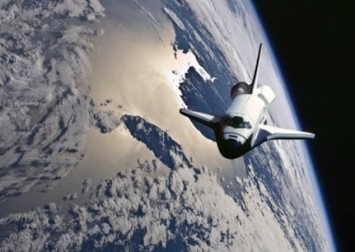 When it comes to real footage of UFOs (unidentified flying objects), film from the 1991 NASA STS-48 Discovery Space Shuttle mission is definitely one at the top of the list. This footage is real, well documented, and has been the subject of rigorous scientific investigation by multiple researchers and institutions. (1)(2)(3)

The video below shows as many as a dozen objects moving in unusual fashion. Apart from that, the most fascinating part is when we see one object at a point near the horizon, as a flash occurs, followed by another object or stream that moves rapidly across the field of view, the object shoots off into space.

Explanations have varied from intelligent extraterrestrial spacecraft, to space weather events and more. There is however, no definite explanation, and many of them don’t take into account the dozens of objects that are captured on film.

“There is abundant evidence that we are being contacted, that civilizations have been visiting us for a very long time. That their appearance is bizarre from any kind of traditional materialistic western point of view. That these visitors use the technologies of consciousness, they use toroids, co-rotating magnetic disks for their propulsion systems, that seems to be a common denominator of the UFO phenomenon” (4) –Dr Brian O’leary, Fmr NASA Astronaut, Princeton Physics Professor


This might be some of the evidence O’leary (quoted above) is talking about. I have personally had a craft sighting that looked exactly like this one, minus the flash of light. I saw the object travel towards me, stop and then shoot up into space at a ninety degree angle a second or two after it stopped.

Dozens of governments have declassified thousands of pages of UFO related documents within the past few years. As a result, we’ve seen high-ranking military and political personnel step forward and share what they believe to be true. Not long ago, Canada’s former Minister of National Defence said that there are “at least 4 known alien species visiting our planet.”

The UFO subject continues to gain some much deserved attention as we move through 2014 and beyond.