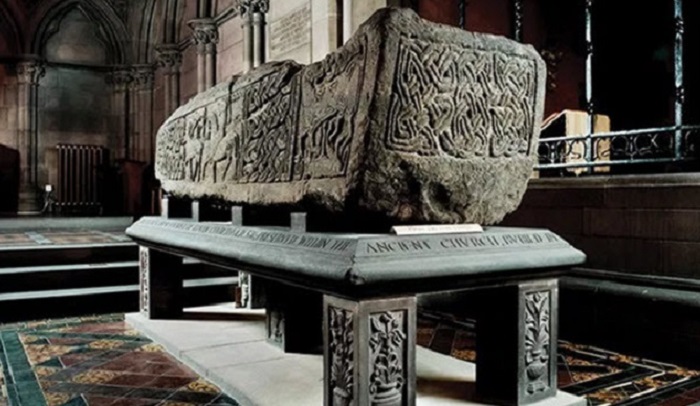 There has always been something tempting in archaeology. It’s like watching Sherlock Holmes solve another riddle. The clues are there, underground, they just have to be found and identified correctly

Moreover, archeology has often been accused of “diverting attention” from the work of historians. But, this is not surprising. For example, the discovery of the remains of the body of Richard III in a parking lot in Leicester (Leicester) in 2014, removed many years of academic research.

In this article, we will not address discoveries related to “uncomfortable artifacts”, but we will list some of the strangest scientifically validated archeological discoveries.

This coprolite ( fossilized human excrement ) was called Lloyds Bank because it was found at the site where a branch of that bank was built in 1972 in the British city of York.

The coprolite was dated to the Viking Age. It’s hard not to feel sorry for the man or woman whose body it came out of. It is huge – 20 cm long and 5 cm wide. It is one of the largest human coprolites discovered in history.

In addition, the wretch suffered from worms, parasitic worms that live in the large intestine. Hundreds of eggs were found in the stool.

However, the study of coprolite gives scientists a unique opportunity to study what the Vikings used to eat when they sailed to conquer England. It turned out that they ate a lot of cereals, in the form of bread and cereals. Currently, this coprolite is stored at the Jorvik Viking Center in York.

In 2015, archaeologists working in the British province Leicestershire ( Leicestershire ), find something unique for Europe – a shield from the bark of the Iron Age. The shield was made in the years around 395-255 BC. This turns upside down all the ideas for shields at the time.

Prior to this discovery, such shields were thought to be too unreliable and used for training, but not in real battles. But the same shield was worn and survived about 10 years of active use.

When archaeologists try to use the same technology to recreate such a shield from modern crust, it turns out that it is so durable that it can even withstand arrows. At the same time, it was much lighter than a metal shield or traditional wooden.

Now we all know that the Vikings have not gotten anywhere, even to a future America, including Ireland, Russia, Baghdad and Egypt. However, the findings on the Swedish island of Helgo are very surprising for archaeologists.

In ancient times, Helgo was a large Viking trading village where goods were traded around the world. Somehow, they reached a Buddha statue, as well as an elegant decoration from an Irish church and a spoon from North Africa.

With the decoration and the spoon, everything is clear, but how did the Buddha statue got there? Have the Vikings sailed to India? This figure was Indian, from Kashmir ( Kashmir ).

According to scientists, the statuette was obtained as a result of an exchange with traders from the territory of Russia or the Middle East. Another version takes into account that some Vikings could be hired in other countries and could even visit Constantinople. Maybe they got that statue somewhere out there.

One of the strangest discoveries of the last 30 years is happening in Munich ( Munich ), Germany, in 1992, when Dr. Svetlana Balabanov explores an Egyptian mummy from Bavaria and conducts a chemical analysis in it’s contained substances.

To her surprise, she finds traces of nicotine (tobacco) and cocaine in the mummy. In ancient Egyptian times, both substances could only be found in America.

Many versions have been suggested about how these substances got into Ancient Egypt and how they ended up in the body of this mummy. Some scientists say that in those years, cocaine-related plants grew in Europe and may have ended up in Egypt.

Other researchers have suggested the ancient Egyptians could have sailed their ships to the Indians of ancient America. For example, they take the maritime voyage of the Egyptian Queen Hatshepsut to the mysterious country of Punt, whose whereabouts have never been established.

There is the fact that the Egyptians had excellent seaports and very large ships. They had a 21-meter-long ship that could carry 200 people.

The Govan Stones are one of the most unusual artifacts of ancient Britain. It is believed that they were created in the era of the kingdom of Strathclyde ( Strathclyde ), around 870 AD In the 19th century, when dug from the earth are gathered together, there are 46 of them, but now there are only 31. Others were accidentally destroyed in 1973.

The stones are carved like sarcophagi or coffins found in Cumbria ( Cumbria ), Scotland and Yorkshire ( Yorkshire ). The stones are elaborately decorated with various patterns and images of animals. Each stone weighs half a ton.

They are supposed to be used at funerals of nobles and approached by the king. Although where the bodies themselves are, it is not indicated anywhere.

In the early 200’s AD, the Romans worked stones in a stone quarry in Cumbria, which were used to build the Hadrian’s Wall. In the intervals between labor, they rested, and some of them made messages on the stones.

In the 1980s, the approaches to the wall where the inscriptions were located collapsed. Now, to see them, it is necessary to decent 9 meters down. Fortunately, in one of the recent dives, archaeologists have made three-dimensional models of these records, which makes it possible to study them.

According to the translations, the Romans simply wrote their names and positions. There was also a caricature of a man, probably their boss, and a penis image.

Before the arrival of the Picts ( Pikten ) of the Orkney Islands ( Orkney Islands ), in the northeast of Scotland, they were sparsely populated. Earlier in the Iron Age, there was one of the most developed settlements in Britain and Scotland. The remains found there are still controversial and lively discussions are taking place.

The whole place is officially called Ness of Brodgar, which is a cluster of stone buildings. The largest and most mysterious structure is codenamed “Structure 10”. It was 27 meters long and 20 meters wide. By Iron Age standards, this is a gigantic structure, compared to other structures that were typically 5 meters thick.

The records show that the building was built around 3300 BC. This means that this “temple” is more than 5 thousand years old.

Another mystery is that despite the thick walls, the interior of the building was only 6 meters. What was inside, no one knows, maybe some relic. Fragments have been found, which are probably remnants of furniture, but these are just assumptions.

Another striking detail is the local roofs made of various stone slabs, arranged in rectangles. However, it is difficult to say what the whole complex is. It has been identified by scholars as a temple, but it has not yet been proven that it was a religious site.

The tomb of Philip I Arab in Bulgaria

There are many ancient mounds in the landscape of modern Bulgaria, which look like small neat hills. They are often excavated by treasure hunters (black diggers) who search for rare artifacts and gold treasures. Each year, $ 1 billion worth of artifacts are sold on the black market in Bulgaria.

Because of this, archaeologists are beginning to actively excavate in 2018, discovering the country’s largest mound, Maltepe. Inside, they find something much more valuable than gold – a great burial place since Roman times.

It is now believed that the mausoleum of the Roman emperor Philip I Arab ( Marcus Julius Philippus ), who lived in the 3rd century AD, is also discovered in Bulgaria. Unfortunately, the black diggers also found it. Archaeologists have found their tunnel.

Inside the tunnel, coins were found from the time of Suleiman I, i. the tunnel was dug in the 16th century. At the same time, the entire tomb was not searched and archaeologists discovered many coins and pottery. The remains of the emperor himself have not yet been discovered.

The “glue” of the Neanderthals

For a long time it was thought that the Neanderthals ( Homo neanderthalensis ) are a pretty stupid human species and cannot be compared to the Homo sapiens . But recent studies have proven more than once that this is not the case. Including the relatively new discovery that came out in the media in June 2019.

Archaeologists have discovered that Neanderthals used a special “glue” in the manufacture of tools. The substance is made of pine resin and beeswax. The mixture was kept at high temperature, then placed on a wooden or bone handle before fixing a stone on it.

The oldest houses in England

In archeology, during the excavation of the remains of homes, the concept of “national border” appeared. It means the age of the oldest ordinary people’s house. While castles and the various structures of temples have been sustainable for millennia, the homes of ordinary people are usually made of less durable material. These homes rarely survived to be seen in the modern day.

In England, the ‘people’s frontier’ is usually valued at the end of the 17th century. It was believed that the houses built earlier had simply not survived because they had been demolished long ago.

However, a 2013 survey shows that this is a misconception. The houses in Wales and the west of England were built between 1260 and 1550, at least 100 years earlier.

In this article:Buddha in Sweden, Govan stones