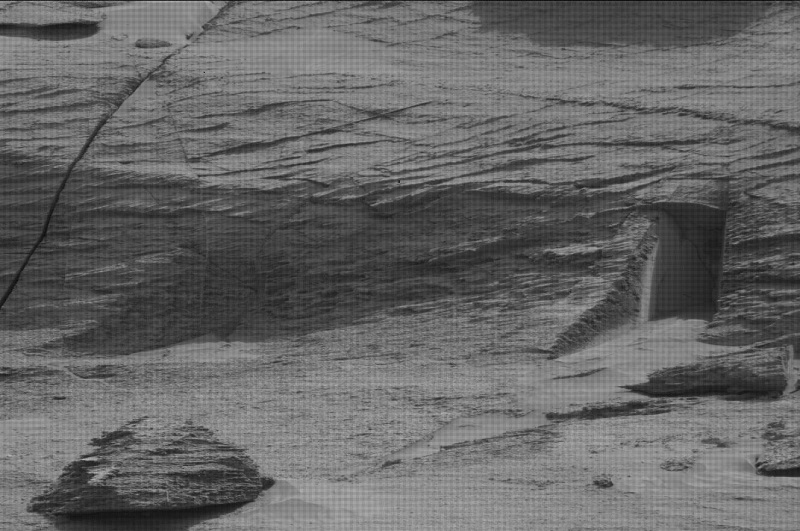 With the appearance of the Curiosity rover on the neighboring red planet, photos and videos from Mars are a constant topic for discussion by conspiracy theorists.

Curiosity does not stand still, and on May 7, 2022, the following image was transmitted to Earth:

Close-up photo of the Martian’s residence:

Over the years of exploring the red planet, various ufologists found all shorts of bizarre artifacts there, but no one expected to find an entrance to a bunker. And you can definitely see an entrance, even its cracked walls. And now, of course, everyone is perplexed by the question: what could it be?

Is the latest “Mars tunnel” another excellent demonstration of how the human imagination and desire for a miracle can cloud the brain, giving rise to new myths of the 20th and 21st centuries?

Users in various forums express different versions, with one of them speculating on this shelter entrance belonging to a certain Martian elite, who, on the eve of a nuclear war, set up an underground residence and ossified in it when the atmosphere was blown off Mars.

It is also possible that this is some kind of Martian military facility, not its main entrance, but a portal to a scientific tunnel or ventilation. In this case, Curiosity should try to go deeper into this passage and who knows, maybe it will be able to pull out some artifacts to the surface, like the ultimate weapon from Ray Bradbury’s stories.

According to experts, similar discovered openings on Mars were attributed to the destruction of lava tunnels caused by collisions with asteroids.

Finally, there is an opinion that NASA artifacts will not be needed because the agency has been sending the following craft to Mars for a long time:

This is supposedly an artistic processing of a logistics file obtained by hackers on one of the Pentagon’s secret servers. The ship is listed in the US Navy, there are people who receive monetary and other allowances. And this landing barge is definitely not in the port of Norfolk.