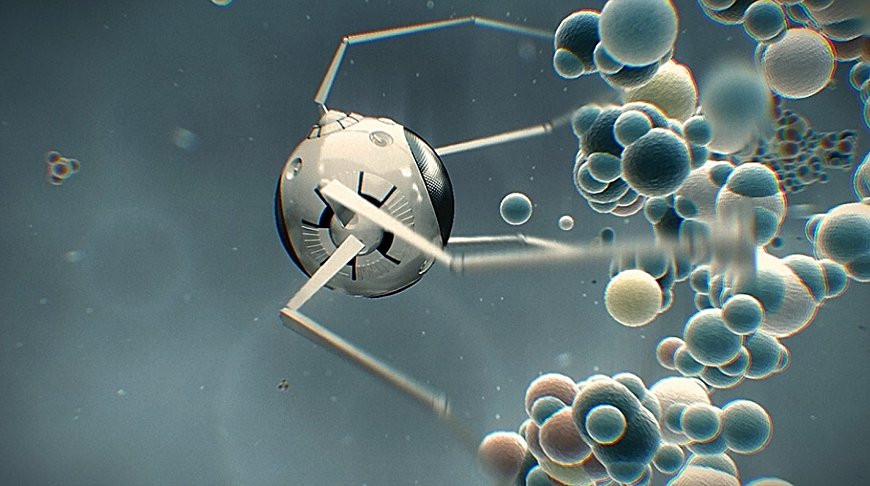 The merging of humans with machines is being used to advance the interests of globalizers, reshape humanity, and gain complete control over every aspect of our lives.

A 2014 video shows futurist Dr Oskar Villani stating that it is possible to monitor people with minimal visible computer chips called “Smart Dust”, and hundreds of them can be “transferred” with a simple handshake.

The nearly 5-minute interview begins with Villani who was invited to the German television program “Heute Konkret” shaking hands with presenter Claudia Reiterer.  He then told her that he had now handed her several hundred microchips, which can now be used to monitor her for up to 14 days and reading a wide variety of data.

According to Villani, DARPA, the military research facility of the US Department of Defense, was significantly involved in the development. They also found a way to use Smart Dust to read our brain.

Villani also said that there is a way to use Smart Dust to monitor our brains.

Watch the following interview from 2014:

The so-called “smart dust” was already developed in the 1990s by Dr. Kris Pister, a professor of electrical engineering at the University of California, Berkeley, as a simple way to use smart wireless sensors. Back then, Pister envisioned a world where ubiquitous sensors could measure anything that could be measured.

Unsurprisingly, the military provided the impetus, funding and development, “smart dust” as a weapon is what attracted the military. In 1992, DARPA funded Pister’s research as part of their Smart Dust project. Then in 2001, the US military carried out a surveillance test with these devices during combat in Afghanistan. After calculating the speed and direction of 142 military vehicles, the test was declared a great success.

“Smart dust” can be sprayed from the air, applied with paint – the enemy will not be able to know that all his movements are controlled. Experts expect that in the coming years, the development of reconnaissance “smart dust” will be fully completed.

Intelligence is only one of the promising military technologies. Tracking devices have a dual purpose and can be used for peaceful purposes. But nano-killers perform only one task – killing the enemy.

Nanobots are so small that they can sneak into the human body unnoticed. They can destroy the circulatory system, affect the internal organs and the brain. A concerted operation of nanokillers, acting on a signal from a single center, can instantly destroy an entire army.

The defense departments of the United States, China and other countries are ready to launch the technology for the production of nanokillers on an industrial scale. There are no technological obstacles to releasing nano-killers in quantities capable of completely destroying the population of an entire country. Nano-devices can penetrate machines and mechanisms and disable them, destroying engines and components.

Another use of “smart dust” is the destruction of enemy manpower in military equipment and the most durable shelters: a cloud of nanodevices envelops the tank, actively penetrates into the smallest cracks and gaps, fills the tank from the inside and explodes on a signal, destroying everyone who was in it. Similarly, stationary protective structures, arbitrarily large, are destroyed.

However, it’s not a dust cloud that can be deadly, but something more reminiscent of an invasion of locusts: hundreds of thousands of microrobots dropped from an airplane stick around armored vehicles, air transport, shelters and explode at the same time.

Let’s not forget that all of these are purposefully acting electronic devices: they act selectively, look for vulnerabilities in defensive points and destroy them not randomly, but by dividing into clusters of the required size and power to destroy a specific object. It is impossible to defend against an aggressive cloud by conventional weapons, but one can probably assume that the same clouds will be able to resist the clouds of nanorobots. Nanobot replicators, for whom the world is just a warehouse of building materials for reproducing their own kind, can fight endlessly.

A world in which nuclear weapons were the main destructive and at the same time restraining force is fading into the past. In the foreseeable future – the military believes that the milestone will be 2030 – humanity will face something more terrible.

In 2013, MIT talked about “How Smart Dust Could Spy On Your Brain”. So Smart Dust is here, already being used and soon to be a daily part of life. It consists of “many small wireless microelectromechanical systems, tiny devices that have cameras, sensors and communication mechanisms to transmit the data to be stored and further processed.

They are usually between 20 micrometers and one millimeter in size. They are wirelessly connected to a computer network and distributed over a specific area to perform tasks, usually using RFID technology (Radio Frequency Identification).

It is interesting to note one aspect: once these particles enter the brain, it is the ultrasound that activates the system for full monitoring. This is an area of ​​research that DARPA is also considering as one of the future methods of mind control.
Their idea is to scatter electronic sensors the size of dust particles into the cerebral cortex and interrogate them remotely using ultrasound. Ultrasound also activates this so-called nerve dust.

Each neuron dust particle is made up of standard CMOS circuits and sensors that measure the electrical activity in neurons nearby.

Neural dust is interrogated by another component located under the scales, but fed from the outside. This generates an ultrasound that feeds the neural dust and sensors that listen for their response, just like in an RFID system.

Elon Musk and Neuralink: Can they read our minds so soon?

And further: “The soft parts of our body consist mostly of salt water. Sound waves can pass through this tissue unhindered and be focused with great accuracy on nerve targets deep in our body, while radio waves cannot.”

Using ultrasound to communicate with the nerve dust also allows the sensors to be made smaller. For example, they can be introduced into the body by injection with a needle.

So it’s a technology that can be used in the spirit of the transhumanists. Elon Musk has already founded the company Neuralink, whose goal is to connect the human brain to a computer. Only to help people of course, develop a “brave new world”.

“Smart dust” is already around us

The power and danger of nanotechnology in general and “smart dust” in particular is well understood by any person. Therefore, each next step along the path of nanotechnology development raises a lot of questions and protests.

The society should be prepared for the introduction of nanotechnologies in terms of infrastructure and even psychologically. Especially when it comes to sensor networks. Even at the current level of development, the real “sensor network”, consisting of mobile phones, social networks of the Internet and their users, destroys regimes and plunges entire countries into a state of civil war.

The most serious concern is the ethical aspect of the use of nanotechnology. “Smart dust” provides great opportunities for manipulating people, for total control over a person, for persecuting opposition-minded citizens, political opponents, and human rights activists. There is no guarantee that criminals will not use these technologies for crimes never seen before.

Admirers of the idea of ​​a “revolt of machines” pay attention to the fact that all information about a person will first come into computerized networks. At the same time, a person, in the end, will “dissolve” as a human being in a comprehensive world of computer consciousness and become completely dependent on sensor networks. In turn, the networks, as the elements in the system increase, the expansion of computing capabilities and the constant growth of knowledge about the world, can acquire consciousness. From this moment, the decline of human civilization and the dawn of the era of machines will begin.

More realistic, but no less bleak, is the prospect of smart dust failing. Can we imagine an artificial brain of fifty microrobots, created by Professor Barker, that has gone mad? And out of five hundred million nanorobots?

What if the “smart dust” of military use goes off course under the influence of some kind of interference? Or will there be a failure in the control of a cloud of combat nanorobots? Or will the sensor network get out of control and start a conscious fight against the person? In Lem’s novel, “smart dust” was not smarter than a person, it only had a desire formed in the course of necroevolution to fight for a place under the sun.

The eminent US scientist, who is called the father of nanotechnology, Kim Eric Drexler, in his book “Machines of Creation”, described a hypothetical doomsday scenario: the first replicator assembles a copy of itself in one thousand seconds, then two replicators assemble two more in the next thousand seconds, four assemble four more, and eight assemble eight more. In ten hours there are over sixty-eight billion. In two days they will weigh more than the Earth, in another four hours their weight will exceed the mass of the Sun and all the planets combined. Nanorobots devour absolutely everything, turning the entire Universe into the so-called “gray goo”.