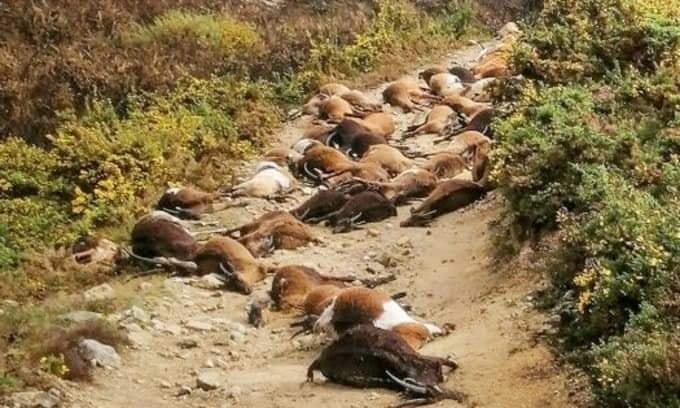 For several months now, conspiracy theorists around the world have been monitoring the situation around the Japanese volcano Sakurajima, where surveillance cameras sometimes see some strange apparatus hovering over the volcano, or meteorites falling on the volcano, or “laser beams”, after which the volcano or sharply activates or vice versa, fades out:

In general, again someone is pounding the volcano with some kind of directional weapon, or vice versa, trying to dampen the volcano. But is Sakurajima the only such case?

As strangesounds.org reports with reference to social networks in Portugal, on April 9, a ‘lightning strike’ in Arcos de Valdevez, Portugal, killed 68 goats.

A nearby shepherd was talking on his cell phone when he suddenly heard two extremely loud thunderclaps, although there were no clouds or rain. According to him, there was no thunderstorm or rain but suddenly, two extremely loud rumbles of thunder rumbled in the sky, emanating from nowhere.

After the unexpected thunder, the farmer looked towards his 300 goats grazing just 100 meters away. He noticed that some of his animals were walking abnormally and decided to check if everything was in order.

It was then that he was horrified to find 68 dead goats lying in a row. Shepherd Dario Lima has never seen anything like it in his 40 years of experience. He says his animals “exploded from the inside.”

He also said that a fire broke out among the vegetation 500 meters from this place. How can this be and what is it in general?

Similar events, happen from time to time. It is raining, people or animals are hiding under a tree, lightning strikes the tree and a serious accident or death occurs. But there is no tree here! That is, the animals stood in an open area without any masts that could attract a charge. And even if the lightning just hit the ground, the affected area is unusually wide.

There are many rumours of secret projects, with laboratories working for many decades on the creation of orbital beam weapons and other technical innovations that they plan to start using from 2018, driving the world into a “new era”.

And so, somehow strangely it coincided that it was from 2018 that flattering fires became the norm, “mysterious atmospheric phenomena” and hums in the sky became commonplace, and lightning that began to kill dozens of animals and people also does not surprise anyone. Then, the pandemic came and some rays began to shoot at the volcanoes.

Now, it seems that a world war could start everywhere at once, at any day. Against this background, some kind of thunderbolt again kills dozens of sheep.

It is no longer possible to believe in a natural explanation of what is happening, and most likely we are talking about new tests of some directional weapon, which they decided to try on sheep. Obviously, sooner or later it will be tested on people.

Advertisement. Scroll to continue reading.
In this article:directional weapons, Sakurajima