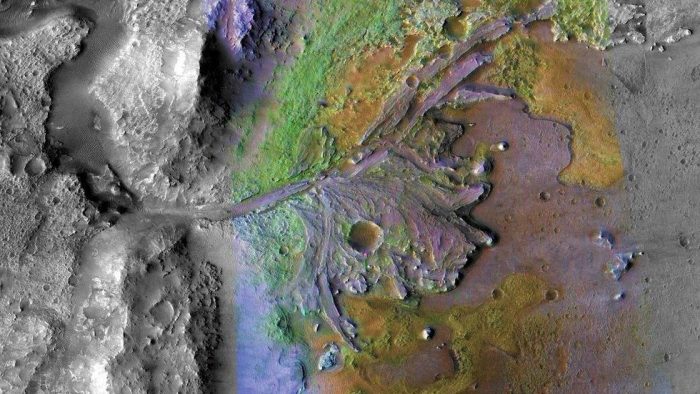 The landing site selected for NASA’s upcoming Mars 2020 rover could well be one of the best chances we have of discovering whether the Red Planet was once home to life and whether it could be again.

The 28-mile (45km) wide Jezero crater was selected as the landing site for the new rover in late 2018, and has been found to contain vast deposits of hydrated silica and minerals called carbonates, according to a newly published study.

Once the site of a lake more than 3.5 billion years ago, scientists now believe that Jezero, thanks to its carbonate supplies, will likely contain structures that can survive for billions of years, such as shells, coral and certain types of rock formed by microbial life.

Deltas here on Earth are known to be hubs for preserved biomarkers and signs of life, and the presence of the hydrated silica suggests Mars is likely to be even better in this regard.

“Using a technique we developed that helps us find rare, hard-to-detect mineral phases in data taken from orbiting spacecraft, we found two outcrops of hydrated silica within Jezero crater,” said the study’s lead author, Jesse Tarnas, a PhD student at Brown University in Rhode Island, US.

We know from Earth that this mineral phase is exceptional at preserving microfossils and other biosignatures, so that makes these outcrops exciting targets for the rover to explore.

The intel about the site, and the surrounding delta, replete with mineral deposits, was provided by data from the Compact Reconnaissance Imaging Spectrometer for Mars (CRISM) instrument that flies aboard NASA’s Mars Reconnaissance Orbiter.

“The material that forms the bottom layer of a delta is sometimes the most productive in terms of preserving biosignatures,” explained Jack Mustard, professor at Brown and study co-author.

“So if you can find that bottomset layer, and that layer has a lot of silica in it, that’s a double bonus,” he added.

The rover will land on Mars on February 18, 2021 when it will begin taking rock core samples that will be deposited in metal tubes on the Martian surface, waiting to be shipped back to Earth for analysis during a later mission.