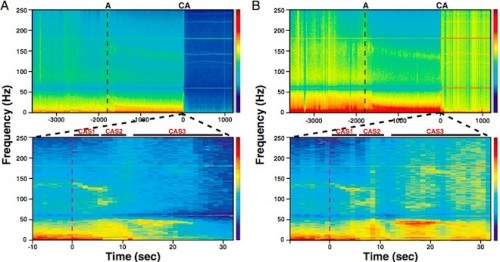 Brain activity in rats while they’re fully conscious, sedated, and after their hearts have stopped (point 0). The top figures span 30 minutes in time; in the bottom figures, activity in the 30 seconds immediately following cardiac arrest is magnified. Image: Borjigin et al./PNAS

An icy prick in the veins and then the potassium chloride quickly runs through the rat’s veins, stopping their heart and blood flow. At that point the rats are considered “clinically dead”.  However new evidence shows the amount of neurological activity that remains for up to 30 seconds (probably longer), high-frequency brain activity that’s known as Gamma waves. These gamma waves are said to affect our perception and self-awareness. This is nothing new, but scientists are now getting closer to figuring out if consciousness does in fact stay awake after death.

Those who have had NDE (Near Death Experiences) usually talk about celestial visions and human (or divine) intervention. The new study on the brain activity after death in rodents can give us a glimpse into the afterlife, or so we all hope. The following WIRED article gives us more details into the new research that’s developing.

For a brief time after their hearts stop beating, electrical activity that some scientists have linked to consciousness in humans continues in the brains of rats — a finding that could shed light on reports of near-death experiences in humans, and opens new possibilities for studying consciousness.

“People have just assumed that, after the heart stops, when the brain has very little oxygen or glucose, then the brain should not function,” said neurophysiologist Jimo Borjigin of the University of Michigan, leader of an experiment described August 12 in Proceedings of the National Academy of Sciences. Higher brain function may require less oxygen and energy than many scientists had thought, Borjigin said.

Borjigin’s team implanted electrodes on the surface of the brains of nine rats, then injected the animals with potassium chloride, causing their hearts to stop beating and blood to stop flowing. This is the clinical definition of death.

At this point, or shortly after, neurological activity is supposed to cease. Yet for up to 30 seconds, the researchers’ electrodes detected patterns of synchronized, high-frequency activity known as gamma waves. In humans, some scientists have suggested that gamma waves could play a role in the interplay of perception, awareness, and intent known as consciousness. In earlier rat research, Borjigin observed a sudden release of neurotransmitters at the moment of death. If what they’ve seen in rats has human analogues, said Borjigin, the combination of neurochemical surge and continued electrical activity could be involved in near-death experiences, in which people report continuing perceptions for minutes after their hearts have stopped.

Of course, it’s impossible to know what their nine rats experienced. Whether they saw a rodent version of the light, so to speak, and whether similar neurological mechanisms exist in humans, remains unknown.

Parnia said the study is “very interesting and raises many questions,” but said the assumption that these patterns exist in humans and might explain near-death experiences “is extremely presumptive and unsupported by evidence.”

Some people who’ve been resuscitated after dying have described seeing and hearing events that occurred tens of minutes after their heart stopped, said Parnia. Electrical activity in Borjigin’s rats didn’t last longer than 30 seconds. The types of signals her group recorded also haven’t been detected in human patients monitored as they died.

According to Borgijin, that’s likely because the signals are relatively weak, and the electroencephalograph machines used to detect brain activity in patients aren’t as sensitive because they take readings from their scalps, not directly from brain tissue.

In future studies, it might be possible to revive cardiac-arrested rats and see whether they recall some stimulus presented after they died, but while brain activity continued, said Borjigin. It may also be possible to obtain more sensitive recordings of human patients going into cardiac arrest, then ask what they’ve seen if they recover.

Yet to Borjigin, questions the study raises about near-death experiences are less interesting than questions about the nature of consciousness itself, and whether it actually requires far less oxygen and energy than previously thought.

If the rats are truly aware after death, the experiment could offer a methodology for testing questions about consciousness. Researchers could, for example, give rats a drug that blocks a particular protein’s activity, then see whether after-death neurological activity is affected. –Source: Wired