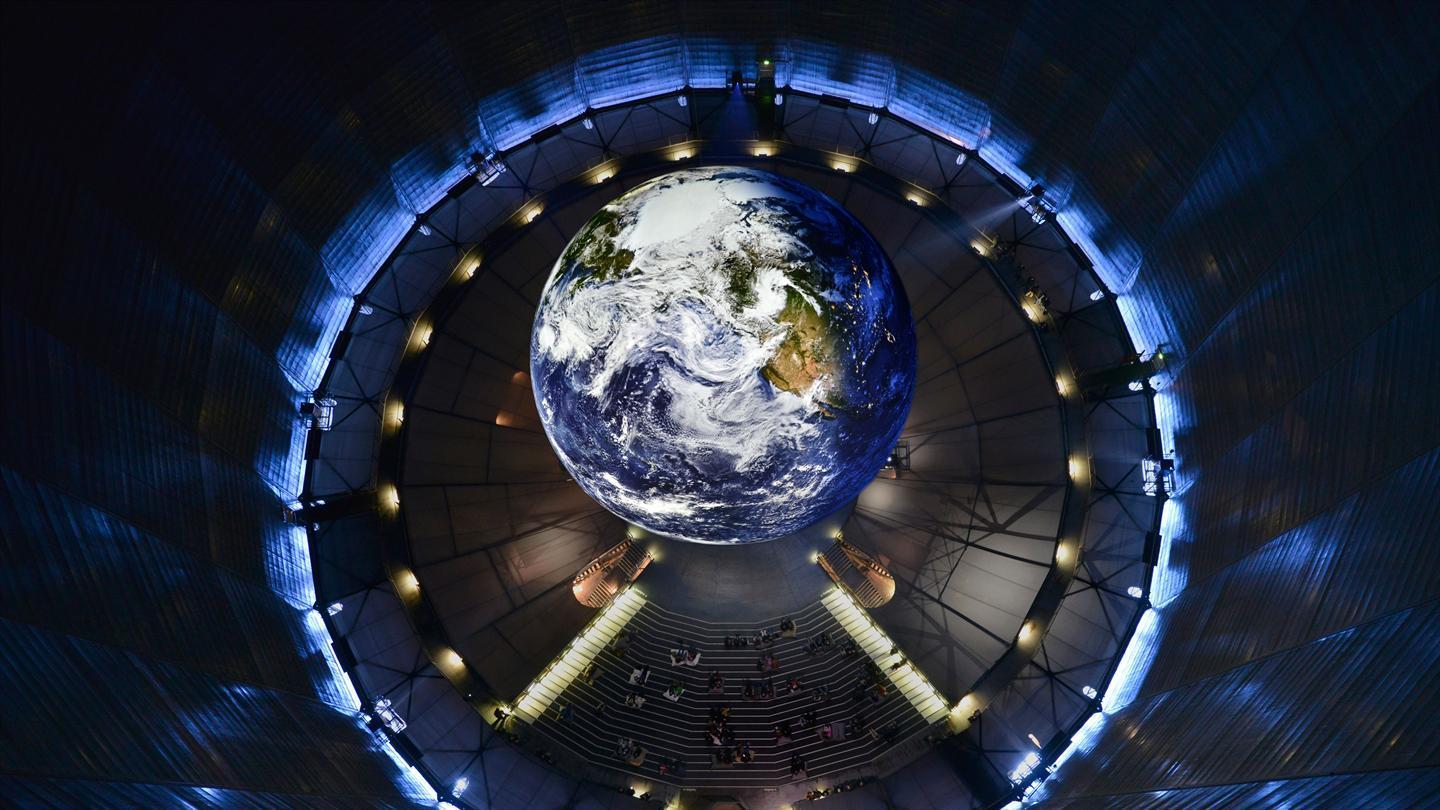 In almost 60 years of NASA’s supposed space exploration, it has never been able to offer us a single genuine photograph of Earth from space. No real! Even though we have had good high resolution cameras for almost 100 years, NASA has never taken a true photograph of our planet, Earth.

By its own admission, all the images we see are composite materials, paintings or computer generated images. Why is this? It could be the answer, horror of horrors, that NASA has never been in space, or at least, not far enough from Earth to have the entire planet in the picture.

Houston, we have a problem…

Above, we have been able to see some pictures of rockets and launches from the NASA space shuttle, using extended exposures to allow us to follow the vehicle for much longer than we would see during normal TV coverage. Do you notice anything strange in the trajectories? Well, I’m not a genius, but according to my Flash Gordon comics the rockets are supposed to go up, not up and then immediately back down … or somewhere in the sea!

Houston, we have another problem …

Surrounding the Earth, beginning at an altitude of 1,000 miles (1,600 kilometers) and extending an additional 25,000 miles (40233 kilometers), are the deadly radiation bands called the Van Allen radiation belts, which could fry the instrumentation of a board and sicken any daredevil astronaut enough by going through them. So, how did the Apollo missions get through the Van Allen belts back in the 1960s, when NASA is currently struggling with ways to protect its astronauts on their (supposedly) next trip to Mars? In this video, NASA engineer Kelly Smith tries to explain it.

Here is something for anyone who still believes that we went to the Moon. It is the convoluted convergence at the Apollo 11 Press Conference immediately after the return of the astronauts to Earth. Keep in mind that these three freemasons, sorry astronauts, sorry men supposedly just returned from the greatest adventure in the history of mankind. These guys are national heroes of the USA. They have fulfilled the dream of every child. We would expect them to be excited, excited and encouraged to have survived the trip, and to have walked on the moon! And yet, they are strangely muffled, nervously watching their teleprompters, and each other, responding to journalists’ questions. “Stars? What stars …? “

At minute 01:04:42, at the Apollo 11 Press Conference held after the return of the astronauts, Neil Armstrong was asked to remember having seen a star in the lunar sky, a subject that the crew was apparently asking to avoid since the correct astrological positions of the constellations were too difficult to simulate in the false lunar backgrounds. Armstrong then erroneously responds with “I do not remember”, to which Aldrin makes a face of annoyance in his mistake (as if one could forget an important detail that they witnessed first hand in his supposed universally unique experience). To help Armstrong recover from being shot by this difficult question, crew member Michael Collins offered assistance by interposing himself saying “I do not remember seeing any.” The problem is, he forgot he was not there! (It was Buzz Aldrin who supposedly stepped on the surface of the moon with Armstrong, not Collins!)

NASA has not been anywhere

What if it is not possible to send things into space, even put things in Earth’s orbit? There are three serious obstacles to putting things in space and getting them to stay there, and these must be accommodated within our “reality framework” so that we can determine what is real and the reality of NASA.

Forget about the lethal Van Allen radiation belts, which extend for thousands of kilometers around the Earth, the main reason why nothing has gone into space is the Thermosphere. This atmospheric layer begins about 50 miles (80 km.) High, where temperatures begin to rise to the Kármán line that reaches 62 miles (100 km.). Beyond this point, the heat increases drastically, rising rapidly to 125 miles (200 km.), Where temperatures can reach 2500 ° C.

For reference: the oven in your kitchen can reach 240 ° C maximum. A crematorium reaches 1000 ° C, and a blast furnace to melt iron can reach as high as 2300 ° C. NASA uses aluminum, magnesium, titanium and epoxy-graphite composite materials to build its spacecraft, all of which would melt at these high temperatures in the thermosphere. Both aluminum and magnesium melt at 660 ° C, titanium at 1668 ° C. While graphite has a high melting point (5500 ° C), it is also an excellent conductor of heat, although your spacecraft will most likely disintegrate long before astronauts are cooked to ashes! Humans can not survive exposures above 70 ° C.

What things float in space when they are beyond 100 km from Earth? Does gravity magically stop affecting objects at this distance? The official answer is that above 100 kilometers the objects are essentially in free fall, but if something travels fast enough laterally, like the space shuttle at 28,000 km / h, then this velocity will cause the object to fall constantly along the convex curve of the Earth, in this way it never reaches the ground – hence the maintenance of itself “in orbit”.

This is known as the theory of gravity, the extrapolation of an idea originally conceived by Isaac Newton in the 17th century, and today increasingly rejected by people of clearer thoughts who have their feet firmly on the ground. In fact, Newton himself, after a certain contemplation, thought about the practical application of his ridiculous theory, as he explained in a letter to a friend, Richard Bentley in 1692:

“That gravity should be innate, inherent and essential to matter, so that one body can act on another at a distance through a vacuum without the mediation of anything else, through and through which its action and force can to be transmitted from one to another, is for me such an absurdity that I believe that no man, who has a competent faculty of thinking in philosophical matters, can never fall into it. ” – Isaac Newton

The idea that a body with enough mass can exert a force of attraction on another, as a planet is supposed to have on its moon (astronauts and spacecraft), has never been proven or proven. A growing number of physicists are questioning whether gravity exists at all.

3. The abundance of counterfeit

If NASA really put things into orbit, sent men to the Moon and launched the probes into outer space, then why is there so much secrecy, subterfuge and falsification of it? And the biggest condemnation of all, why can not NASA produce a simple genuine photograph of Earth from space?

Precious, no? Well, it’s false! This iconic image (above) was armed with presumed “satellite” data and then photoshopped so crudely that you will see it if you click on the image. The discovery of duplicate clouds has led to accusations that not only the 2002 image (blue marble II) is a fake, but the original image of Apollo 17 (blue blue marble I) was probably a fake too. That, in turn, has led some to wonder if everything NASA did and said was false.

NASA says: This spectacular image of the “blue marble” is the most detailed true-color image of the entire Earth to date. Using a set of observations based on satellites, scientists and visualizers together sewed months of observations of the Earth’s surface, oceans, sea ice, and clouds in a continuous mosaic of true color from each square kilometer of our planet.

It’s all about expectations, says the artist from NASA:

“The last time someone took an overhead photograph of low Earth orbit that showed a complete hemisphere (one side of a globe) was in 1972 during Apollo 17. The satellites of NASA’s Earth Observation System (EOS) ) were designed to perform a health check of the Earth. By the year 2002, we finally had enough data to make an instantaneous take of the entire Earth. That’s what we did. “

“The most difficult part was the creation of a flat map of the Earth’s surface with the four-month satellite data. Reto Stockli, now at the Federal Office of Meteorology and Climatology, did much of this work. Then we wrapped the map flat around a sphere. My part was to integrate the surface, clouds and oceans to match people’s expectations of how Earth looks from space. That ball became the famous Blue Marble. “  – Robert Simmon, artist at NASA.

All very fascinating, but would not it be easier to simply take a photograph – alone a photograph – from one of its more than 3000 satellites? Apparently not. The good people of NASA tell us that the only ‘photos’ of the entire Earth were taken during the Apollo 17 mission. The fact that this mission, along with all the other Apollo missions, never really left the earth, are going to Do the search for these problematic photos.

Yes, but NASA has satellites. It is not like this? I mean, NASA has been sending objects into space for years, is not it? True? How can we know? The problem is that this US government agency, with its multi-million dollar budget, has a monopoly on all space artifacts. The only way to know for sure would be to go there ourselves, independently of NASA, and take a look around. This is exactly what Sir Richard Branson tried in 2014.

Will there be a conclusion to make? By conclusion we mean a judgment or determination on the reality of NASA of the so-called “space program”? Is that what we want, even if it runs the risk of being presented with the worst case where everything has been a big lie? Because if, as the facts seem to indicate, NASA has not even been in orbit (whatever it is), then we have to get used to a completely new reality, without moon landings, satellites, Hubble telescope, International Space Station, or missions to Mars. Yes, even worse, one of the reasons why there is nothing in orbit is because gravity does not exist, so what is preventing us from getting rid of Nasa’s Earth-Marble?