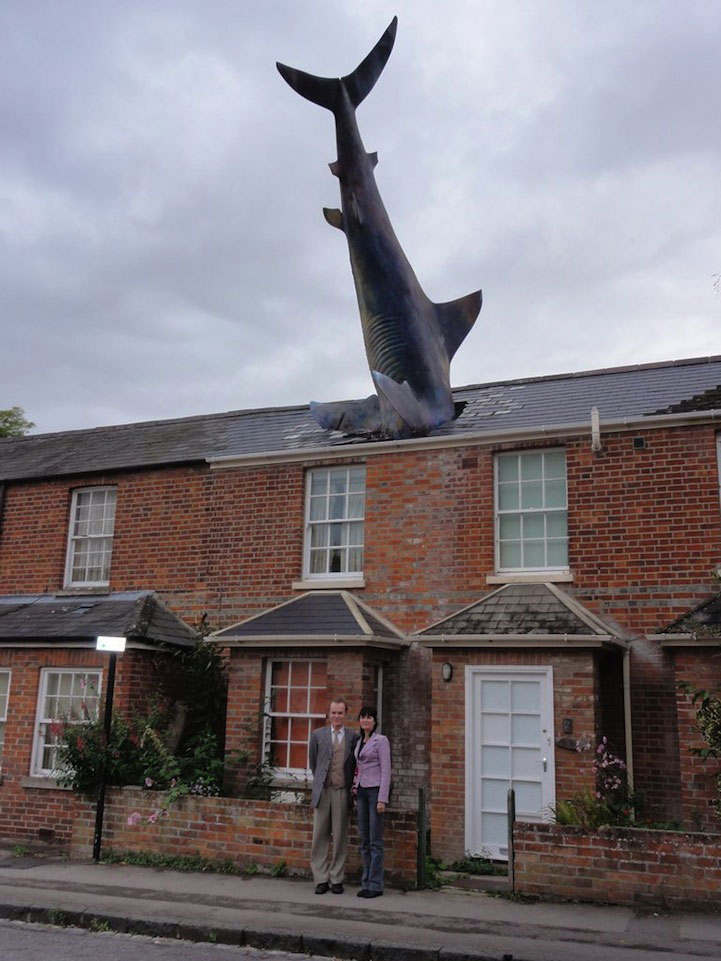 Tornadoes over water are too weak to lift sharks, but strong enough to bring smaller animals ashore.

Sharks fell from the sky in the SyFy Channel’s “Sharknado,” a campy movie that stirred up Internet buzz and is getting a sequel.

The premise of the movie can be summed up in this line uttered by one character: “Sharks in tornado. Sharknado. Simply stunning.” High speed winds from a Los Angeles hurricane result in tornadoes over the ocean that pick up sharks from the sea and carry them to land, where they’re flung into people. And the sharks do what sharks do: They attack.

In real life, of course, sharks don’t fall from the sky. But fish, frogs, and alligators do—and scientists think the likely cause is a weather phenomenon called a “waterspout,” a term first coined in 1738 by traveler Thomas Shaw.

A waterspout is a tornado that occurs over a body of water. When it forms, a column of water connects to a storm cloud and spins over the ocean. Typically, a waterspout is weak and short-lived, says Christopher Vaccaro, a spokesman for the National Weather Service.

A waterspout can occur anywhere in the world with the right ingredients: a thunderstorm and a swirl of winds at different altitudes. However, the odds of a waterspout hitting a coastal city like L.A. are slim. Tornadoes are more common inland because “the ingredients tend to be more extreme or available,” Vaccaro says, whereas air cooled by the ocean near coastal cities prevents a turbulent atmosphere.

And a waterspout might sweep up animals that dwell near the surface of a body of water and bring them to land. Vaccaro says waterspouts are somewhat like vertical rotating washers at a carwash, which circulate water and then fling it an anything in their path.

Don’t expect any sharks to drop in. “While the tornado is spinning air along the surface of the water, it’s not necessarily like a vacuum where it’s sucking up sharks or sucking up marine animals out of the depths of the ocean,” Vaccaro said. “So odds are the sharks wouldn’t even be close enough to be entrained in the circulation of the water spout in any way, let alone would they be lifted because they weigh so much.”

What about smaller creatures? Scientists have never witnessed the journey of animals via a waterspout. But there are plenty of reports, Vaccaro says, about fish or frogs falling from sky to land. And often the likely culprit is a waterspout. Here’s a sampling.

Call it a new kind of fly fishing. On a stormy day in March 2010, the residents of Lajamanu, Australia, heard something more than the pitter-patter of rain on their rooftops. According to an article from the Daily Mail, the dull thuds of fish hitting the ground assaulted their ears–and left them with plenty to clean up.

A tornado was the probable cause, according to a meteorologist quoted in the article. He theorized that the winds whisked the fish up, up, and away from a river that may have been hundreds of miles away. He is further quoted as saying that the fish were frozen in the tornado, and thawed out when they fell. That’s why eyewitness reports say the fish, identified  as spangled perch, a common freshwater fish that swims in rivers across Australia, were still alive when they fell.

A woman is quoted in the article as saying, “All I can say is that I’m thankful that it didn’t rain crocodiles!’” But we don’t want to give SyFy channel any ideas. Or do we? Check animal #4.

Frogs present a particular problem in the waterspout world. There are many reports of frogs falling from the sky, dating back to the 3rd century AD, Greek grammarian and author Athenaeus quoted Greek historian Heraclides Lembus’ account of frog rain in two Greek cities  of Paeoina and Dardania: “In Paconia and Dardania it has, they say, before now rained frogs…So great has been the number of these frogs that the houses and the roads have been full of them.”

There are many other tales of amphibious rain, often attributed to waterspouts: Toulouse, France in 1804, Derby, England in 1841, Gibraltar in 1915, Sutton Coldfield, England in 1927, and Odzaci, Serbia in 2005.

The problem, say frog experts, is that some people have overactive imaginations. In the case of reduced visibility during rain, a group of migrating, bouncing frogs might be mistaken for frog rain.

Then there is the mystery of the tadpole drop. In Japan in 2009 a number of cities in the Ishikawa prefecture experienced a spattering of tadpoles raining from the sky. While some speculated that birds could be dropping the baby frogs, one thing is clear: These tadpoles did not have the legs to migrate.

A flurry of debate centered around a bizarre incident near Worcester, England on May 28, 1881 when a species of snail called periwinkles sprinkled down upon a field near St. Johns Parish. In a report published in the Berrows Worcester Journal, some locals claimed to witness the “alleged falling of the univalve tribe.” The reports describe the periwinkles as still alive, and some say the aerial escargot were accompanied by other crustaceans such as crabs.

Skeptics thought that a fishmonger might be responsible. Fishmongers replied that they would never give away fresh snails.

One enthusiastic man, J. LI. Bozward, wrote into Berrow’s Worcester Journal to theorize the phenomenon of waterspouts, stating that “a rotary storm” could have lifted “half a ton or so of periwinkles in its vortex.”

And a G.P. Yeats called it “one of the grandest and most curious of nature’s phenomena.”

On December 26, 1887 the New York Times reported that Doctor J.L. Smith of Silverton Township, Kentucky, saw something fall to the ground. And then it started crawling toward him.

“On examining the object he found it to be an alligator,” the Times writes.

The good doctor went hunting for more alligators. He found six more, “all quite lively and about 12 inches in length.”

The article attributed the strange occurrence to waterspouts.

Clumps of worms fell from the sky in Jennings, Louisiana on July 8, 2007.

According to a report by TV station KPLC news, the plummeting worms may have hitched a ride in a waterspout that had been reported about five miles away. When the durable invertebrates landed, they squirmed and wiggled.

Police department employee Eleanor Beal, who witnessed the worms, said: “When I saw that they were crawling, I said, ‘It’s worms! Get out of the way!’”

At least it wasn’t sharks!