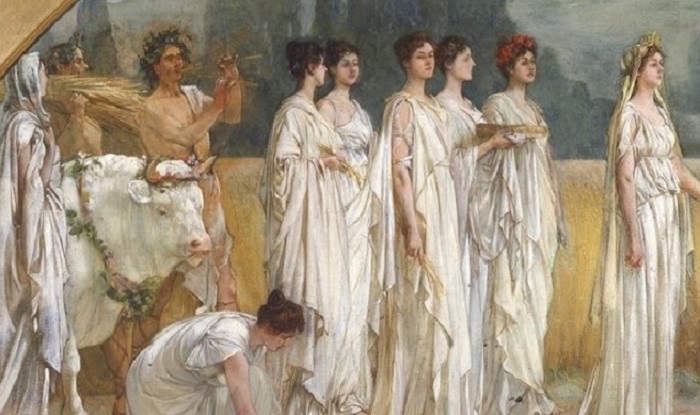 The ancient Romans and Greeks had a very liberated morality regarding intimate relationships. Some of them seem excessive even by today’s standards.Here are some great facts about sex in ancient Rome and Greece.

Many of you may have heard of the legendary version of the destruction of Pompeii (Pompeï). It is similar to the “death” version of the cities of Sodom and Gomorrah. Pompey residents bathed in luxury and indulged in various sexual perversions. Because of this, their gods became angry and awakened to Mount Vesuvius (Vesuvio) in 79 AD. He burned and burned the city and its surroundings.

In Pompeii, archaeologists have discovered more than forty brothels. The largest and most popular were called Lupanare Grande (“The House of Pleasure”, Lupanare Grande). The rooms in these brothels were crammed with straw beds and the walls were decorated with pornographic murals of varying degrees of corruption.

These brothels represent a large part of Pompey’s economy and generate as much revenue as public baths. Now, little is left of the ruins of these brothels, but the large images of phalluses on the walls can be clearly seen.

Everyone loves to watch

The famous study of the National Archaeological Museum in Naples (Museo archeologico nazionale di Napoli) presents various revelations about sexuality in Pompeii and Herculane (Herculaneum). There are murals, sculptures and bas-reliefs representing all kinds of sexual contact with people and … not only.

In the 4th century BC, the Romans conquered the Etruscans and at the same time learned about the embittered Etruscan women. The Etruscan women were often completely naked and it was a pleasure for them to see their beautiful bodies.

The ancient Greek philosopher Aristophanes wrote the comedy “Women of the Feast of Themophores”. We know from him that this feast was held in honor of the goddess Demeter. Only married Athenian women participated in it because the ritual symbolized fertility.

With this ritual, it was clearly believed that married women were throwing out “available sexual disorders”. During these three days, the Athenians could freely and everywhere use various obscene words and vulgar insults while proclaiming their own intimate organs.

The carnivals in Ancient Greece and Rome were events without any conventions, class divisions and observance of rules of conduct. During the event, “there was nothing to answer by saying no.”

“Everyone was drunk at different stages and everyone was attracted to each other, regardless of gender.”

Carnivals in the 5th century BC were held on the day of the equinox of spring, also called the Dionysian Mysteries. They were dedicated to the god Dionysus, the patron saint of all earthly desires. Later, the Romans embraced this tradition and thus the famous Bacchanallians emerged.

Most of the carnival murals came to us from the Mystery Villa in Pompeii. They do not depict anything particularly perverse, and such carnival processions can still be seen in Greece today.

It is safe to say that the ancient Greeks were obsessed with the phallic cult, even more obsessed than they even imagined. They had Priap as god, son of Dionysus and Aphrodite, who had a very long and erect penis. In his name comes the specific male disease – priapism.

According to legend, Priap did not have a good relationship with the other gods, but was worshiped on earth. The so-called Priap Book, which reaches us, contains a collection of 95 very vulgar verses dedicated to God.

In the city of Ephesus (Ephesus), in the 6th century BC, lived the poet Hipponactus, who composed many mocking and naturalistic poems about the lives of the poor. Because of this, he had made many enemies, and the sculptor Bupal was particularly offended by him. Bupal and his brother created a very unpleasant image of the poet, who turned from a mocker into a vengeful enemy.

In response to the sculpture, Hipponactus began writing poetry, accusing Bupal of having sex with his mother, mocking his name, and others in the same spirit.

It is not surprising that the unfortunate Bupal did not withstand such pressure and eventually killed himself.

Aristophanes was considered one of the most famous playwrights of ancient Greece. But he was also known for his criticisms of social and political relations in Athens in the late fifth and early fourth centuries BC.

In the comedy Lysistra, Aristophanes parodies the gender war, where women use men’s desires for their own purposes, denying them sex to make peace between Athenians and Spartans. That is, the settlement of “sexual transactions”.

Athenian Lisistra gathers women on the square and tells them: “Until men are reconciled – do not sleep with them, do not give in to them, do not touch them!“. The women agree and hide in the Acropolis. The men ask them to stop, but they do not give up and as a result, the war is over.

The science of love

There was something similar to the Indian Kama Sutra in ancient Greece. Ovid created a series of works entitled “The Science of Love,” “Love Elegies,” and “The Art of Love.”

Mark Valerius Martial is a poet from Rome, 1st century AD. 12 of his epigrams reach us. There are many indecent things in them. This “dirt” is not just in one book.