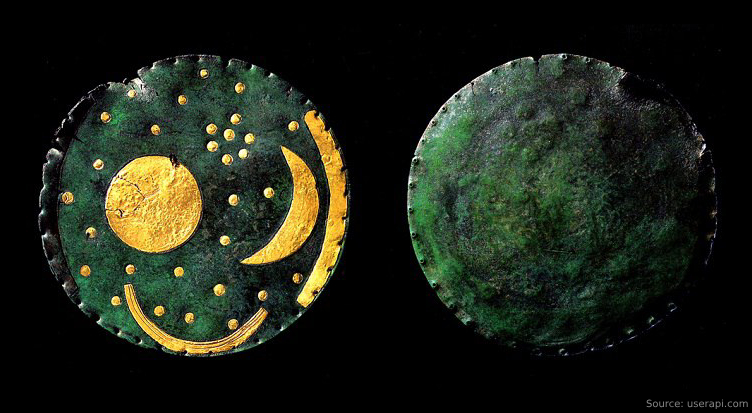 Scientists from Germany have clarified the dating of one of the most famous and mysterious artifacts found in recent years. The Celestial Disc of Nebra, considered the oldest depiction of the cosmos, is younger than thought.

A new study of the celestial disk from Nebra, formerly considered the oldest depiction of space, has shown that it was made in the Iron Age, making it much younger. This is stated in a study published September 3 in the journal Archäologische Information and a summary of it appeared on the website of the Goethe University in Frankfurt am Main. Experts from the Ludwig-Maximilian University in Munich also took part in the study.

The Nebra Celestial Disc is one of the most significant archaeological finds in German history. In 2013, it was included in the UNESCO Memory of the World Register. This artifact was discovered in 1999, and was found by “black diggers”. Presumably, it was found along with swords, axes and bracelets from the Bronze Age.

Until now, it was believed that the celestial disk from Nebra dates back to the Early Bronze Age, created approximately in the years 2200-1600 BC. However, archaeologists from Goethe University Frankfurt and Ludwig-Maximilian University of Munich re-analyzed the location and circumstances of the find. And they came to the conclusion that the disc must be dated to the Iron Age, which is about 800 – 50 BC.

The Celestial Disc from Nebra is one of the most significant archaeological finds in Germany and was included in the UNESCO Memory of the World Register in 2013. Searchers said it was discovered during illegal excavations in Germany in 1999, along with Bronze Age swords, axes and bracelets.

Therefore, many years of research have been aimed at verifying both the identity of the alleged find and the general origin of the objects, regardless of the vague information provided by black diggers.

As a result of new research, archaeologists concluded that the site, which until today was considered a find and which was investigated during subsequent excavations, with a high degree of probability is not the true place of the discovery of the celestial disk. In addition, there is no conclusive evidence that swords, axes and bracelets from the Bronze Age form a common ensemble.

According to archaeologists, this means that the disc should be examined and evaluated as a separate find. Therefore, since the celestial disc from Nebra does not correspond to the motives of the early Bronze Age and should be considered as an artifact of the Iron Age, the researchers say.

The Celestial Disc from Nebra was discovered in 2001 while trying to sell it on the black market for archaeological artefacts. The looters were detained, and the disc was handed over to the archaeological museum at the University of Halle.

Disc sellers said they found the disc in 1999 with a metal detector in the town of Nebra (Saxony-Anhalt, 60 km west of Leipzig). From the same burial, they extracted two bronze swords, two hatchets, a chisel, and fragments of spiral bracelets.

During excavations in Nebra, archaeologists did find traces of the presence of bronze. It also turned out that the soil from the excavation site is exactly the same as the traces of which were found on the disc.

In this article:Celestial Disc, Nebra