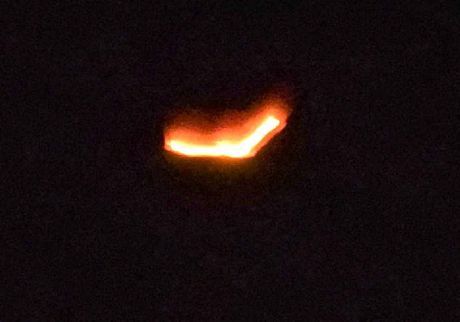 A commercial pilot with more than 30 years’ experience has been left scratching his head over mysterious lights he saw over Caloundra on Good Friday.

The pilot, who does not want to be identified, said he had never seen anything through the cockpit window that compared to the experience.

It has the self-confessed “world’s greatest sceptic” questioning everything he believes about UFOs.

The Pelican Waters man was admiring the sky with friends about 8pm last Friday when they first saw two coloured lights in the sky.

He said they reminded him of Chinese lanterns, rising high into the sky and heading south and then east.

Then a third warm-orange glow appeared and suddenly changed direction, tracked north-east and quickly disappeared. “We were looking for an identifier; a beacon or strobe light but there wasn’t any,” he said.

“I thought it had the characteristics of an object that could fly and I was curious as to what the lights were.”

Still not thinking “UFO”, he grabbed his camera.

It was only when he downloaded the images onto his computer he was able to zoom in and see what appeared to be wing tips and the slight outline of an aircraft body.

“I was surprised … with the clarity with the camera,” he said.

“At first I was curious because it was moving so quickly, moving at a speed that I have never seen a lantern or something of that sort doing.

“When we zoomed in later we thought, ‘Wow, that has a shape to it’.”

While there were other planes and helicopters in the sky that night, he said none of them had the same flight pattern.

He is open to the possibility of it being a military operation, but he said he didn’t think they resembled that type of aircraft either.

“I have heard of and seen many, many things in my career and have flown all over the world … but nothing like this,” he said.

“I think it is fascinating and if there is some credibility to it … it has changed my mind that there could be something else out there.”

Advertisement. Scroll to continue reading.
In this article:Caloundra, UFO