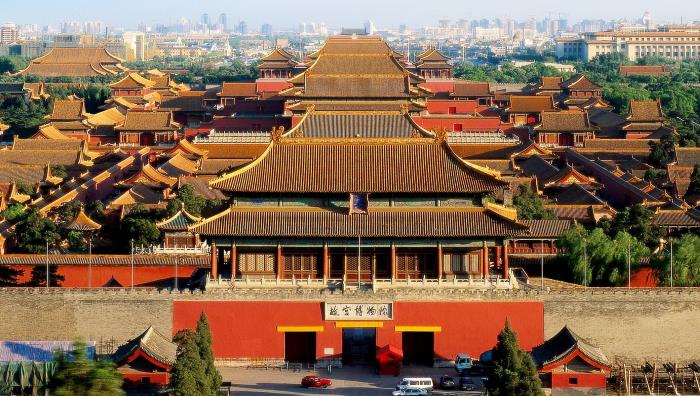 If we compare the millennia during which palaces were built and restored in China with an epic novel, then the Forbidden City in Beijing is its last impressive chapter. An exhibition celebrating the 600th anniversary of the completion of the Forbidden City opened in Beijing on September 10. Photo: Jiang Dong / CHINA DAILY

The previous pages of this story, although no less amazing, were partially or even almost completely lost during the rise and fall of dynasties and turned into ruins, similar to archaeological puzzles. Experts are still solving them. However, in the heart of Beijing, there is a 720,000-square-meter palace complex built of wood and clay bricks – the last surviving structure of its kind in the world. This area, which served as an imperial palace from 1420 to 1911 and where 24 emperors once lived, celebrates 600 years since the completion of construction this year.

In honor of this event, the Umen Gate galleries at the entrance to the Imperial Palace Museum became a kind of lobby, where visitors to the exhibition “Eternal Splendor: Six Centuries in the Forbidden City” enter. It will run until November 15th.

“There is so much that has happened in 600 years that can be said,” says Zhao Peng, director of the museum’s architectural heritage department and chief curator of the exhibition. “It is best to focus on the ‘city’ itself, that is, on architecture: to understand how this place was formed and modified … This is the crystallized wisdom and talent of the ancient Chinese. “

Yet it is not easy to select just 450 items, including structural elements and imperial relics, to reveal a panorama of such architectural splendor. In order to chronologically show how the complex originated, expanded and developed with the help of the exhibits, 18 significant years were selected from the entire centuries-old history.

In 1406, Zhu Di, the third emperor of the Ming Dynasty (1368-1644), proposed to move the capital from Nanjing (today it is the administrative center of Jiangsu Province) to Beijing in order to better guard the northern borders. Zhu Di himself lived in Beijing as a prince.The Forbidden City was built according to rules derived from centuries of Chinese history.

The construction was completed in 1420, after almost ten years of preparation and three years of active work. The following year, the capital was officially moved to Beijing.

“A striking feature of the Forbidden City is how, despite the changing eras, certain architectural forms are strictly adhered to,” Zhao says. “This reflects traditional Chinese thought that emphasizes the importance of ritual and harmony between people and the sky.”

The Forbidden City was built according to rules derived from centuries of Chinese history. The exhibition presents “Notes on the Study of Crafts” (Kaogongji) – a treatise that spells out the basics of building a palace. It was published during the Spring and Autumn Period (770-476 BC) and is part of the classic Chinese work Zhou Rituals (Zhouli) on rituals and notions of order.

“Notes on the Study of Crafts” regulate the symmetrical layouts of the capital cities, in the center of which on the north-south axis should be a palace. The historic districts of modern Beijing, including the Forbidden City, fully comply with this rule.

“Finally, this ideal layout, which has been guided for nearly 2,000 years, has been faithfully embodied in Beijing,” Zhao says.

Following the rituals is reflected in the architectural details.

For example, only the roof of the Hall of Higher Harmony – the most prestigious structure in the palace, where the most important ceremonies took place – can be decorated with ten figures of deified beings. The simpler the roof is decorated, the lower the status of the building.

The Hall of Supreme Harmony also has 11 rooms – more than any other building in the complex. (In ancient Chinese architecture, a room was a square space between four columns.)

Roof shape is another important indicator by which you can determine the status of a building. For example, the roof of the Hall of Higher Harmony is four-pitched and two-tier, its ends protrude and bend upwards. Only buildings of the highest status can have such a roof.

In 1734, Emperor Yongzheng of the Qing Dynasty (1644-1911) issued an official guide to the construction of palaces. The book, which is over 2,700 pages, spells out all the architectural criteria, including the size of the columns and the decoration of the roofs. According to Zhao, this is an important milestone in the history of the fusion of rituals with Chinese architecture.

The Forbidden City in Beijing has two older brothers. When Zhu Yuanzhang founded the Ming Dynasty and became emperor, he made the capital of his hometown, which is today in Fengyang County, Anhui Province. However, the construction of a huge palace complex for unknown reasons suddenly stopped, and Zhu Yuanzhang decided to build an imperial city in Nanjing.

Both imperial cities fell into ruins, but some important details have survived to this day, such as stone fences and tiles in the galleries of the Umen Gate. They help to imagine what the early architecture of the Forbidden City might have looked like.

“The original appearance of buildings can often be seen in the paintings,” says the deputy director of the architectural heritage department of the museum, Di Yajing.

No matter how the new emperors followed the precepts of their ancestors, it is clear that they wanted to decorate their new home. “The Ming emperors preferred simple yet stately architecture, and therefore large buildings were built during their reign,” Di says. “However, the Qing emperors tended to be more sophisticated.”To understand whether the pictures correspond to historical reality, you need to conduct additional checks

Sometimes this was a forced decision, since it was difficult to find giant pieces of valuable timber to renovate the palace. However, the Qing emperors demonstrated their wealth and status with handicrafts of the most skillful work. Thanks to Emperor Qianlong (1711-1799), who adored fine arts, this trend reached its peak. In 1766, he ordered the construction of the Palace of Serenity and Longevity in the Forbidden City, where he planned to live after leaving the throne. The garden of this palace has become a real treasure trove of exceptional decorative objects.

The lacquered gauze fabric, which used to be placed on the window, allows visitors to appreciate its uniqueness, because the garden has never been opened to the public before. The decor of this silk combines techniques such as paper cutting, gilding, dyeing and varnishing. This means that several artisans worked on its creation at once. 12-ply fabric is paper thin.

“We tried to replicate this decor, but even modern manufacturing techniques did not help us,” Dee says. “This lost technique reminds us that cultural heritage must be carefully preserved.”

Complex renovation of the main buildings of the complex has been going on since 2002. Although it was originally planned to be completed by a round date this year, in the end the architects decided not to rush to complete the work with full responsibility and respect for history.

In this article:China, Forbidden City