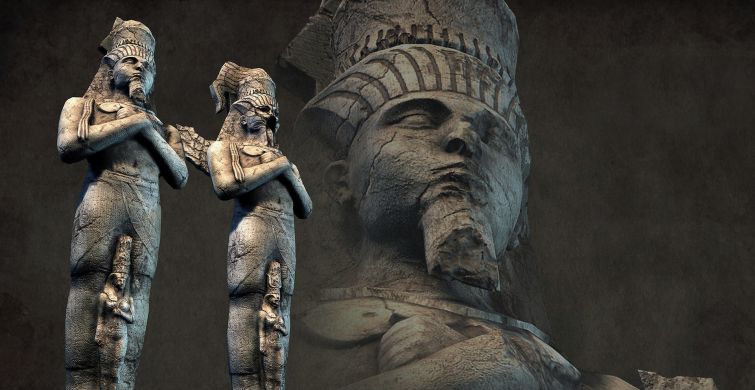 The lack of the necessary high-precision equipment, with the help of which numerous ancient Egyptian artifacts could be created, as well as the absence of traces of industrial infrastructure for its production in Egypt itself and beyond, indicate that high technologies were brought in from outside. And here it would not be bad to recall the mythological story widespread among various peoples about the “sons of heaven” who, after completing a humanitarian mission on Earth, return to their “star”.

At the turn of the III millennium BC. e. in Egypt, an inexplicable technological breakthrough took place practically from scratch. As if by magic, in an extremely short time, the Egyptians erect pyramids and demonstrate unprecedented skill in processing hard materials – granite, diorite, obsidian, quartz … All these miracles occur before the appearance of iron, machine tools and other technical tools. Subsequently, the unique skills of the ancient Egyptians disappear just as rapidly and inexplicably …

Take, for example, the story of the Egyptian sarcophagi. They are divided into two groups, which are strikingly different in the quality of performance. On the one hand, carelessly made boxes, in which uneven surfaces prevail. On the other hand, multi-toned granite and quartzite containers of unknown purpose polished with incredible skill. Often, the quality of processing of these sarcophagi is at the limit of modern machine technology.

No less a mystery are the ancient Egyptian sculptures, created from super-durable materials. In the Egyptian Museum, everyone can see a statue carved from a single piece of black diorite. The surface of the statue is polished to a mirror finish. Scientists suggest that it belongs to the period of the Fourth Dynasty (2639-2506 BC) and depicts the pharaoh Khafra,

But here’s the bad luck – in those days, Egyptian craftsmen used only stone and copper tools. It is still possible to process soft limestone with such tools, but diorite, which is one of the hardest rocks, is by no means possible.

And these are still flowers. But the colossi of Memnon, located on the western bank of the Nile, opposite Luxor, are already berries. Not only are they made of ultra-strong quartzite, their height reaches 18 meters, and the weight of each statue is 750 tons. In addition, they rest on a quartzite pedestal of 500 tons! It is clear that no transportation device would withstand such a load. Although the statues are badly damaged, the excellent workmanship of the flat surfaces that survived suggest advanced machine technology.

But even the greatness of the colossi pales in comparison with the remains of a giant statue resting in the courtyard of the Ramesseum, the memorial temple of Rameses II. The sculpture, made from a single piece of pink granite, reached a height of 19 meters and weighed about 1000 tons! The weight of the pedestal on which the statue once stood was about 750 tons. The monstrous size of the statue and the highest quality of execution absolutely do not fit into the technological capabilities of Egypt of the New Kingdom period (1550-1070 BC) known to us, to which modern science dates the sculpture.

But the Ramesseum itself is quite consistent with the technical level of that time: the statues and temple buildings are created mainly from soft limestone and do not shine with construction delights.

We observe the same picture with the colossi of Memnon, whose age is determined by the remains of the memorial temple located behind them. As in the case of the Ramesseum, the quality of this structure, to put it mildly, does not shine with high technologies – unfired brick and roughly fitted limestone, that’s all the masonry.

Such an incongruous neighborhood can only be explained by the fact that the pharaohs simply attached their temple complexes to monuments left over from a different, much more ancient and highly developed civilization.

The eyes of the statue

There is another mystery associated with the ancient Egyptian statues. These are eyes made from pieces of rock crystal, which were inserted, as a rule, into limestone or wooden sculptures. The quality of the lenses is so high that thoughts of turning and grinding machines come naturally. The eyes of the wooden statue of Pharaoh Horus, like the eyes of a living person, look either blue or gray depending on the angle of illumination and even imitate the capillary structure of the retina! A study by Professor Jay Enoch of the University of Berkeley showed the amazing closeness of these glass dummies to the shape and optical properties of a real eye.

The American researcher believes that Egypt reached its greatest skill in lens processing by about 2500 BC. e. After that, such a wonderful technology for some reason ceases to be exploited and is subsequently completely forgotten. The only reasonable explanation is that the Egyptians borrowed quartz blanks for eye models from somewhere, and when the reserves ran out, the “technology” was also interrupted.

How the Gods looked

The ancient Greek historian Diodorus of Siculus wrote ‘from the words of the Egyptian priests that mortals ruled Egypt for less than 5 millennia. The human kingdom was preceded by the rule of gods and heroes who ruled for an incredible 18 thousand years. The ancient Egyptian priest and historian Manetho also begins his list of rulers of Egypt with a dynasty of gods and demigods.

If we compare the statements of ancient authors and the facts at our disposal, it turns out that there was no technological breakthrough. Just starting from the III millennium BC. e. in Egypt, artifacts from the first divine dynasties began to surface. It is possible that the pharaohs purposefully searched for, tried to master and along the way to appropriate the surviving fragments of this heritage.

The sculptural images of the daughters of the reformer Pharaoh Akhenaten can tell about the appearance of the original creators of the ancient masterpieces. The first thing that catches your eye is the unnaturally elongated shape of the skull, characteristic, by the way, for other works of the Amarna period. This phenomenon gave rise to the hypothesis of a congenital disease in the family of the pharaoh. However, nowhere is it mentioned about any mental deviations in the ruler’s family that such a disease should inevitably cause.

If the pharaohs really were distant descendants of the gods, it is possible that from time to time they could manifest “divine” genes. Is it not with this anatomical feature of the gods that the custom of head deformation, widespread among various peoples, is associated?

Another important and mysterious detail of the ancient Egyptian sculptural canon is the absolute symmetry of the proportions of the face. As you know, there are no symmetrical objects in nature. This rule applies to the human body as well. Moreover, experiments have shown that photographs composed of strictly symmetrical halves of the same face evoke instinctive rejection in a person.

Something unnatural and alien to human nature cuts through them. But, perhaps, in the world where the gods came from, other natural conditions reigned, thanks to which the “anomaly” became the norm? Be that as it may, we should carefully listen to Plutarch’s words:

“It is not the one who denies the existence of the gods that falls into greater blasphemy, but the one who recognizes them as they are considered by the superstitious.”

In this article:demigods, Egyptian statues