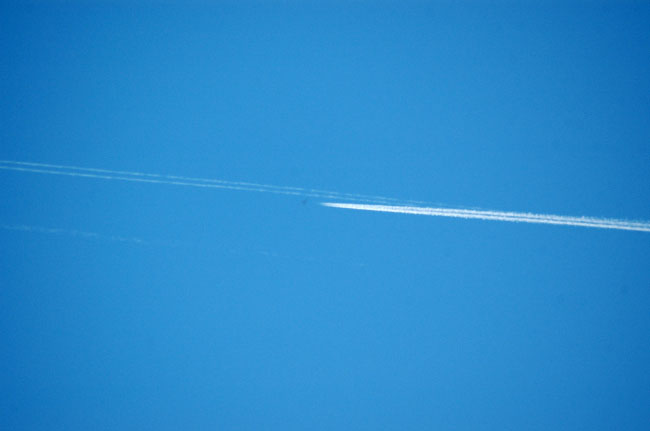 Aviation experts and UFO conspirators have been perplexed by photographs of a mysterious flying object in US air space.

Grainy images showed a triangular blob with a long vapour trail flying through the clear blue skies above Amarillo, Texas next to another contrail left before it.

Defence technology blog Ares claimed this could be one of the rare times that a classified military plane has been photographed.

‘As far as I know, this sort of thing has happened only once since 1956,’ explained blogger Bill Sweetman.

Mr Sweetman went on to say that the photographer, Steve Douglass, spends a lot of time looking for unusual flying objects and listening out for them on radio.

Douglass claims to have picked up related radio communication between the aircraft – suggesting it must have been manned as opposed to remotely-controlled.

Blog comments are speculating about the type of aircraft and suggestions are ranging from a B-2 Spirit stealth bomber to a Boeing Phantom.

As the US Air Force are unlikely to be forthcoming with information, the flying objects will almost certainly remain ‘unidentified’ (probably not aliens, though, sorry).

Advertisement. Scroll to continue reading.
In this article:Black project, UFO