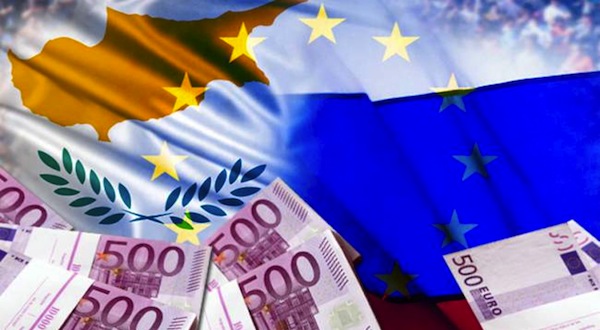 Only 4 days after clumsily bobbling an IMF attempt to enslave and bankrupt the Cyprus government and its citizens in yet another bailout scheme with impossible conditions, IMF Chief Christine LaGarde has been sent a loud and clear message.  “You are expendable!”  Repeating the pattern begun when LaGarde’s predecessor, Dominique Strauss-Kahn was humiliatingly arrested and charged with rape in New York in 2011, LaGarde’s Paris home was publicly ransacked by EU authorities under the pretense of investigating a decades old case of corruption.  The timing of this action leaves little to the imagination while revealing that the nature of the Cyprus situation is much more important to the power elites than has been heretofore advertised.  LaGarde should probably be thankful for her high profile position which makes it more difficult to have her “disappeared” or “suicided”.  You see, the problem in Cyprus is not merely a financial problem; it is also a geopolitical problem.

It can be said that nearly all geopolitical problems are financial in nature, but not all financial problems are geopolitical.  This one is however, and it is one attached to the very heart of the future plans of the European power structure.  LaGarde has just endangered it by causing uproar over whether the depositors of the troubled Cypriot banks should have their money seized in order to save the banks as a condition of an IMF bailout.  She has in essence lost the forest while chopping at the tree right in front of her.  As this drama has unfolded and continues to quickly develop, we have seen the notion of deposit theft resoundingly rejected by the island country’s citizens while at least three bad outcomes have been created by LaGarde’s ineptitude:  1)  The financial markets have been roiled over the idea that bank deposits may be seized, 2) Cyprus has been driven into Russia’s arms for help, and 3) The current generation of world citizens have forever had their perceptions altered as to their relationships with banks and governments.  All three of these outcomes have severely damaged the long term agenda of the power elite, which explains the swift retaliation against LaGarde.  But there is a fourth outcome that has not yet been widely discussed in the overt media and which is probably the most important.

As mentioned above, the Cyprus agenda involves much more than finances, it also encompasses the long term economic prosperity of greater Europe as well as the containment of Russia and Vladimir Putin, who is seen as a threat.  Why?  Because of Europe’s inability to produce and supply for itself sufficient natural gas to power its industries.  Europe currently imports the majority of its gas energy, mostly from Russia, who in the past has proven willing to hold its gas hostage to extract higher prices or other concessions from the EU.  By the year 2020, the amount of gas imported by the EU is projected to rise to 68%.  This energy vulnerability would be enough to effectively hold the EU economy hostage by those who control the supply of gas, namely Russia.  Recently though, it has been estimated by scientists that the exclusive economic zones (EEZ) of Greece and Cyprus contain enough untapped gas resources to power the EU’s energy needs at projected 2020 levels for at least the next 120 years.  This means that in order for Russia to maintain its enviable position of leverage over the EU it must figure out how to either gain control over those gas supplies, or come up with a way to prevent them from ever coming on line.  So long as things remain turbulent in the Greek and Cypriot EEZs, time is on Russia’s side.  EU demand for gas will continue to rise, and Russia’s influence over the EU will proportionately increase.  But if things stabilize in the area and the EU is able to come to long term agreement over the infrastructure and supply of gas from Cyprus and Greece, then their prosperity is all but assured while Russia’s influence and profits will dramatically wane.

Having learned of the proposition by LaGarde to steal depositor’s savings to save their banks and obtain a bailout, Cyprus’ Financial Minister made a hasty visit to Russia to see if a deal could be reached, but Russia rebuffed those advances.  This was a most interesting development but it reveals Russia’s possible strategy.  Although it is possible Russia is playing a hardball game of negotiation, whereby they demand ironclad rights over the gas supplies, which probably were not offered at this early stage by the Cypriot minister, it could also mean that Russia is intent on keeping things in turmoil to prevent a deal being made by anyone, including the EU.  I rather think they are doing both, with negotiations being the first plan, and prevention of a calm investment environment to scuttle any rival deals being the backup plan.

By targeting the small island country’s depositors, LaGarde virtually guaranteed the measure would fail because the Icelandic model of throwing all the politicians out of office and storming the castle was a possibility not accounted for by her.  As anyone who follows politics knows, the best time to enact controversial change is just after an election, which gives the incumbent time to ride out the hostile reaction and rehabilitate his public image in time for the next election.  Cyprus had just held their elections less than three weeks prior to LaGarde’s demands on its government, so LaGarde must have wrongly assumed that now was a good time to act.  What LaGarde failed to realize was that the amount of bailout money being asked by Cyprus is a pittance when compared to the future earnings and leverage to be had when Cyprus’ gas holdings are developed.  This meant that the Cyriots had options, including striking a deal with the Russians, going bankrupt and minting their own currency to pay debts, or driving a harder bargain with the Europeans, which is probably what will be attempted.

There are already indications that Europe is going to further cave in their demands.  Although hard-edged talk of letting the Cypriot banks collapse continues, it seems doubtful that this will actually be allowed to occur because of the options already mentioned that are at Cyprus’ disposal.  Furthermore, even if the other options never panned out, the resulting turmoil would only serve to benefit the status quo, and therefore Russia, while further weakening the EU financial markets.  True, Russian depositors and the Russian government would initially suffer immediate losses because of their deposits in Cypriot banks, but in the long term, they would probably benefit by keeping the Cypriot gas supplies off line.  Ultimately, the best course of action for the EU in light of the damage caused by LaGarde will be to offer the bailout anyway, and then immediately forge agreements for the exploration, development and sale of Cyprus’ gas, viewing the bailout money as grease for the skids.  Germany has taken the position that they do not support the nationalization of Cypriot pension funds, which seems to show they do not wish to repeat LaGarde’s mistake, and is an indication of softening of their position.

From Russia’s perspective, once it is confirmed that a deal can’t be reached with the Cypriot government, it then becomes a matter of disrupting the political environment to the point where the gas lines simply can’t be developed.  In a small island country where 36% of the Island calls itself the Turkish Republic of Northern Cyprus and is recognized only by Turkey as a legitimate political entity while being viewed by the rest of Cyprus and the world as occupied territory, it is not hard to imagine how Russia might foment political unrest.

LaGarde attempted to have her cake and eat it too.  It didn’t work, and now she is paying the price.  Europe is scrambling to repair the damage she has caused and align things so that the gas lines can be developed while Russia makes its own bid to gain control of those resources or stop them from ever being developed.  The Turks may yet play a part in this drama as a foil to the power elite in the EU.  Military action can’t be ruled out.