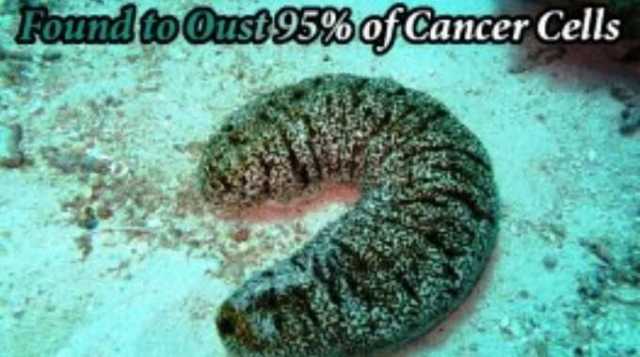 Sea cucumber has been used in traditional  Chinese medicine for hundreds of years, but they are relatively obscure in the  U.S. This may be soon changing, however, as evidence mounts that sea cucumber  extracts can kill cancer cells while stimulating the immune system.
As reported by Ethan Evers, author  of The Eden Prescription, previous research on sea cucumber has demonstrated its  ability to kill lung, breast, prostate, skin, colon, pancreatic, and liver  cancer cells. These extracts have also proven effective in killing leukemia and  gioblastoma cells. Looks like we can add yet another food to the list of  anti-cancer foods. Scientists believe a key compound known as  frondoside A to be responsible. Frondoside A is a triterpenoid, diverse organic compounds found in the essential oils and  oleoresins of plants.
This latest study, published in PLoS One, has  confirmed just how powerful frondoside A truly is. Researchers found it to kill  95% of ER+ breast cancer cells, 95% of liver cancer cells, 90% of melanoma  cells, and 85-88% of three different types of lung cancer.
As Evers  reports:
But the benefits of this compound dont just stop at directly  inducing programmed cell death (apoptosis). It also inhibits angiogenesis (the  ability of tumors to grow new blood vessels to get their food) and stops cancer  metastasizing by impeding cell migration and invasion. Even more intriguing is  the ability of frondoside A to activate our immune systems natural killer cells  to attack cancer cells. This has been shown for breast cancer in particular but  may also apply to all cancers, because it involves the immune system and not  cancer cells directly. This may partially explain why frondoside A was so  effective at shrinking lung tumors in mice that it rivaled chemo drugs in  performance.
When given to mice with non-small cell lung cancer,  frondoside A was found to shrink tumors by 40% in only 10 days. Traditional  chemo drugs shrunk the tumors by 47 percent, but the risks of chemo treatment  are far greater than any side-effects or risks of sea cucumber. (Namely because  there are no known risks associated with sea cucumbers). In addition, the amount  of frondoside A needed to achieve such results was minisculeless than a single  milligram for an adult weighing 165 pounds.
While sea cucumber extracts  arent currently offered as a treatment for cancerat least not in your  traditional doctors officeyou can find dried and powdered sea cucumber in health  stores. It is packaged as a solution to arthritis and similar conditions because  of its anti-inflammatory properties.