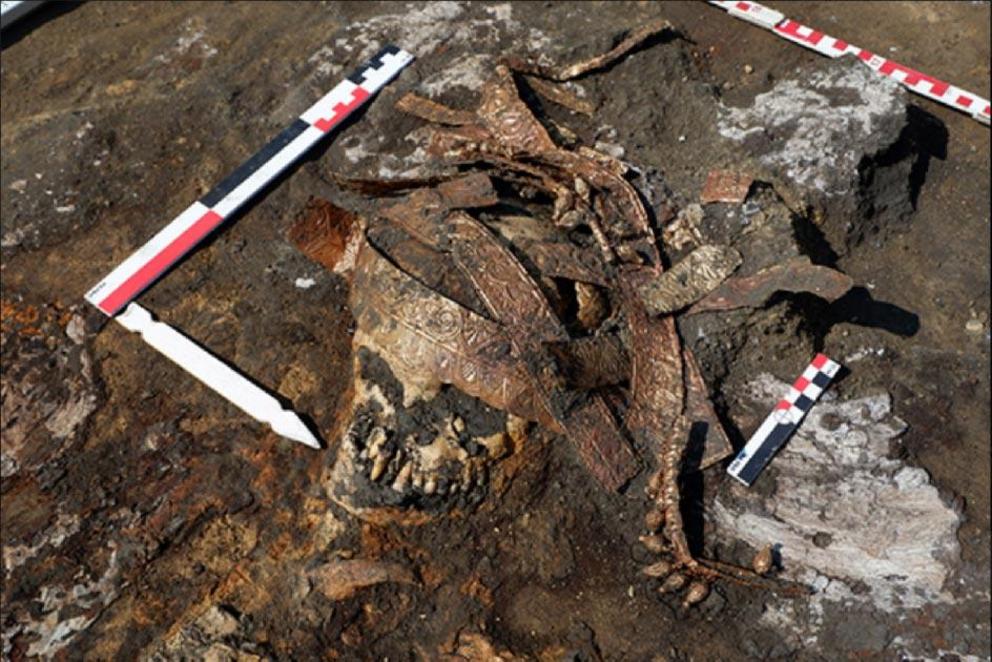 The burial of the Amazon with a ceremonial golden headdress.

Investigations at the Don excavation site in Russia have unearthed a burial mound containing four Scythian women with impressive grave goods that include one of the most complete golden headdresses ever found from this era.

Valerii Guliaev, the head of Don expedition, announced the first results of the examination on the 6th of December at the session of Academic Council of IA RAS.

The burial of the Amazon with a headdress made of precious metal dating back to the second half of the 4th century BC was found by the staff of the Don Expedition of IA RAS during the examination of the Devitsa V Cemetery of Voronezh Oblast.

Devitsa V Cemetery, which was named after the local village has been known of since the 2000s. It consists of 19 mounds, some of which are almost hidden as this region is an agricultural zone which is currently plowed. Since 2010 the site has been studied by the specialists of the Don Expedition of IA RAS.

By the time of the excavation works, barrow No. 9 at Devitsa V cemetery was a small mound of just 1.1 meters in height and 40 meters in diameter. Under the center of the mound the archaeologists found the remains of the tomb, where the narrow dromos (entrance passage) from the eastern side had led. In ancient times the tomb was covered by oak blocks which were laid crisscross and rested on 11 strong oak piles. The grave-pit was surrounded by the clay earthwork taken from the ground during the construction of the grave.

A Tomb of Females

In the barrow four women of different ages were buried: two young women of 20-29 years old and 25-35 years old, a teenage girl of 12-13 years old and a woman of 45-50 years old. The burial must have occurred at the same time, as one of the piles that supported the floor of the tomb was in the dromos and completely covered the entrance so that it would be absolutely impossible to pass it during next burials.

The burial had been looted in ancient times. The robbers broke into the tomb from the north when the floor had already fallen and the sepulcher was buried i.e. 100 or 200 years after the barrow was filled. However, only the northern and eastern parts of the tomb had been robbed where there were the remains of the teenager and one of the young women.

Apart from the remains, in the northern part of the pit we found more than 30 iron arrow heads, an iron hook in the shape of a bird, fragments of horse harness, iron hooks for hanging harnesses, iron knives, fragments of molded vessels and multiple animal bones. In filling the robbers’ passage, the broken black lacquer lecythus with red figure palmette, dating back to the second to third quarter of the 4th century BC was found. Maid V. Barrow No. 9. General view of the burial-pit including the second woman (individual No. 2; 30–35 years old) buried along the western wall with her head to the south in the so-called. “Pose of the horseman”.

At the southern and western wall there were two untouched skeletons laid on the wooden beds covered by grass beddings. One of them belonged to a young woman buried in a “position of a horseman”. As the research of the anthropologists have shown, in order to lay her in such a way, the tendons of her legs had been cut. Under the left shoulder of a “horsewoman” there was a bronze mirror, to the left of the skeleton there were two spears, and on her left hand she wore a bracelet made of glass beads. By the legs there were two vessels: a molded cassolette and a black lacquer one hand cantharus which was made in the second quarter of the 4th century BC.

The second buried was a woman of 45-50 years old. For the Scythian time it was a respectable age as the life expectancy of a woman was 30-35 years old. She was buried in a ceremonial head dress, calathus, the plates of which were preserved decorated with the floral ornament and the rims with the pendants in the shape of amphorae. Analysis has shown that the jewelry was made from an alloy where approximately 65-70% was gold and the rest is copper, silver and a small per cent of iron. This is quite a high per centage of gold for Scythian jewelry, which was often made in the workshops of Panticapaeum from electrum, the alloy of gold and silver, where the gold content would be approximately 30%.

“The calathus is a unique find. This is the first headdress in the sites of Scythian epoch found on Middle Don and it was found in situ on the skull. Of course, earlier similar headdresses were found in known rich barrows of Scythia. However, only a few were discovered by archaeologists. They were more often found by the peasants, were taken by the police or landowners and the finds had been through many hands when they came to the specialists. That is why it is not known how well they have been preserved. Here we can be certain that the find has been well preserved”, noted Valerii Guliaev.

Along with the older woman an iron knife was laid wrapped into a piece of fabric and an iron arrowhead of quite a rare type, tanged with forked end was placed. These finds and also many details of the weapon and horse harness suggest that the Amazons, women-warriors from the Scythian epoch among Iranian nomadic and semi nomadic tribes of Eastern Europe, were buried in this barrow. Such horse women probably were cattle herders and dwelling guardians, while the men went on long-term warpaths.

“The Amazons are a common Scythian phenomenon and only on Middle Don during the last decade our expedition has discovered approximately 11 burials of young armed women. Separate barrows were filled for them and all burial rites which were usually made for men were done for them. However, this is the first time we have come across burials with four Amazons of such different age”, said Valerii Guliaev.

This article was provided by Institute of Archaeology of Russian Academy of Sciences, under the title, “ Archaeologists found the burial of Scythian Amazon with a head dress on Don River ” and has been edited for style and clarity.