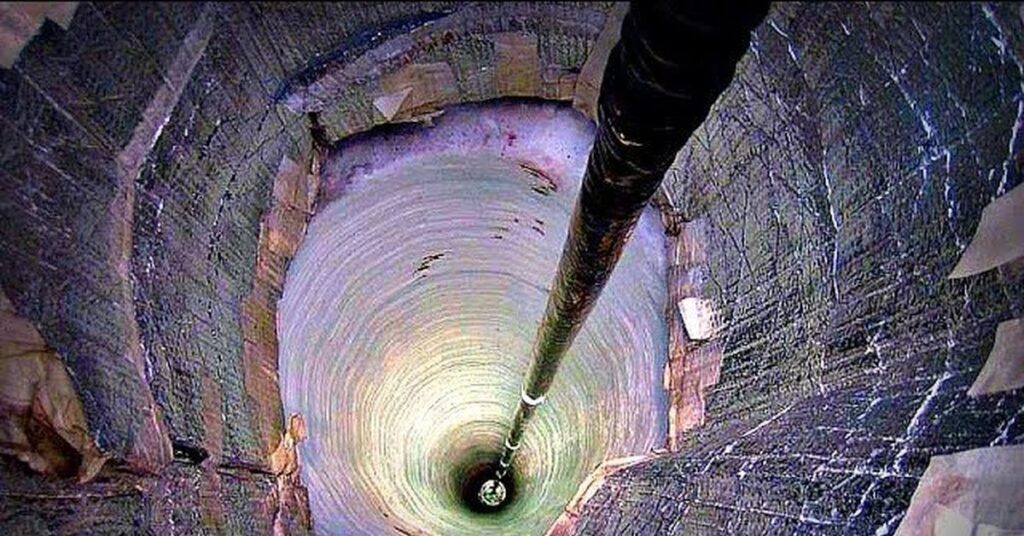 The Kola well in the Murmansk region in Russia, became known throughout the world not only as the deepest, but also as the “well to hell”.

At the end of May 1970, drilling began on the Kola superdeep well, which, after a little over 20 years, entered the Guinness Book of Records as the deepest in the world. This record has not been broken so far, but it gained world fame not only due to its size, but also because it became known in Western countries as the “well to hell”. Since the end of the 80s, its own mythology has developed around the well, which has become widespread in the world.

In the name of science

Unlike most others, the Kola Well was originally created exclusively for scientific research and was an important image history. Several specialized research institutes were created for research, articles on drilling and exploration of underground subsoil were regularly published in Soviet and Western scientific journals.

Well drilling continued for almost a quarter of a century. The work began in 1970, and finally stopped only in 1994 (in fact, active drilling stopped in 1991). During this time, the depth of the well reached 12,261 meters, which made it the deepest in the world. She still retains this title. After the collapse of the USSR, funding for the project ceased, the well was mothballed.

According to the most popular version of the urban legend, in 1989 an accident occurred at the mine. Having reached a depth of about 14 kilometers, the drillers discovered a huge cavity. At this depth, the temperature exceeded a thousand degrees Celsius, so it was decided to lower a unique heat-resistant microphone into the well.

Due to the very high temperature, he worked for only a few seconds, but during this time he managed to record terrifying sounds – the groans and screams of damned souls cast into hell. After that, most of the workers fled, and the work manager, Dmitry Azzakov, categorically refused to continue drilling. As a result, it was decided to mothball the well and classify the record.

In another variation of the legend, when the microphone that recorded the terrifying sounds stopped working, something burst out of the well – a winged hellish demon, similar to a bat, which soared into the heavens in front of dozens of workers and flew away.

Promotion of the legend

This story was first published in a small-circulation Finnish Christian Pentecostal newspaper in late 1989. The authors of the article were generally aware of the Kola well (information about it was often published in European publications), but made several mistakes. Thus, the well was called the “Siberian gateway to hell”, although in reality it was drilled not in Siberia, but in the Murmansk region.

In addition, the article claimed that the depth of the well reached 14 kilometers, while in fact drilling was stopped at around 12.2 kilometers. In addition, there were no microphones that could handle such extreme temperatures. And the temperatures themselves were much less extreme. At a depth of 12 kilometers, the sensors recorded 220 degrees, and not at all a thousand. The permanent head of the well was not the mythical Dmitry Azzakov, but the famous Soviet geologist David Guberman.

However, such errors and inaccuracies were far from the main drawback of this fascinating story. The main problem was that the authors of the legend could not provide the recordings of the “hellish moans”, referring to the fact that it existed, but was classified in the USSR.

The lack of any evidence did not bother the American Christian TV company TBN, which devoted several broadcasts to this story. The Americans referred to the Finnish newspaper as “a respected scientific publication.” To understand the scale of the legend’s promotion, it must be said that TBN is the largest religious television network in the world.

In the Finnish original, it was reported only about the recording of hellish sounds, the demon escaped from hell appeared much later, already in the early 90s. Then in the USA a parallel legend arose on this base. The action was transferred to Alaska, and the demon who escaped from hell not only disappeared without a trace in the night sky, but also killed several drillers before that.

The story of the Siberian well to hell has been circulating around the world for several years in various collections of urban legends and headings of thematic newspapers. Its second wave of popularity came with the advent of the Internet nearly a decade later.

In 2002, the presenter of one of the regional US radio stations, after a broadcast on the “hellhole”, received an e-mail from one of the listeners. The letter said that his uncle was a passionate researcher of the paranormal and had amassed a huge collection, which contained the very same recording of hellish sounds. According to the author, his relative died recently, but managed to tell that a friend who worked as a BBC correspondent gave him the recording, and that in the early 90s he received it from the Russians.

An audio recording was attached to the letter, which the radio host played on the next show. Her appearance breathed a second life into a slightly forgotten urban legend. It has appeared on all themed sites, making the “infernal well” one of the most popular urban legends in Western countries. She migrated from thematic sites to large tabloids, thanks to which she got to Russia, where she was not very well known before.

Based on the legend, several fictional works have been created, including the film “Horror at a depth of 9 Miles”, in which the main role was played by Adrian Paul (known from the TV series “Highlander”).

The story has become so popular that all sorts of legend busters and exposers of paranormal stories could not help but be interested in it. They conducted a full-scale detective research, during which they managed to trace how one of the most popular urban legends of our time was born.

The first publication of the story took place in 1989 in a small circulation Finnish newspaper dedicated to mysticism and the paranormal. There was a special section in the newspaper, which included stories sent by readers. However, they were not subjected to any verification.

From this newspaper, it ended up in a small print edition of Finnish Pentecostal Christians. And after the publication in it, she appeared on American TV. A TBN correspondent stumbled upon it while reading a selection of European Christian publications.

A Norwegian teacher who was in America saw this story on TV. He was amazed at the credulity of the Americans and, for fun, he added to the legend by adding a story about a demon escaping from hell and a story about Dmitry Azzakov. Submitting his additions to TBN and for credibility, enlisting the support of a pastor friend, he sent Azzakov’s photo to TV (in fact, it was a photo of a Norwegian construction worker, cut from the newspaper).

Enthusiasts even managed to establish the source of the “hellish screams” from the audio recording. It turned out to be an old Italian horror film “Baron Blood”, from which an unknown joker cut out several sound effects and, after processing, combined them into a single recording.

Since the beginning of the 90s, David Guberman, the head of work at the Kola superdeep well, has had to answer questions about “hellish cries” and the demon escaped from the underworld in almost every interview since the beginning of the 90s. Of course, he categorically denied all this. Guberman died in 2011. In the last interview, published a month and a half before his death, he complained that he still had to answer “stupid questions” about devils and hell.

However, despite all the investigations and denials, the story of the Siberian well to hell is still one of the most popular urban legends of our time.

In this article:Kola well, Russia