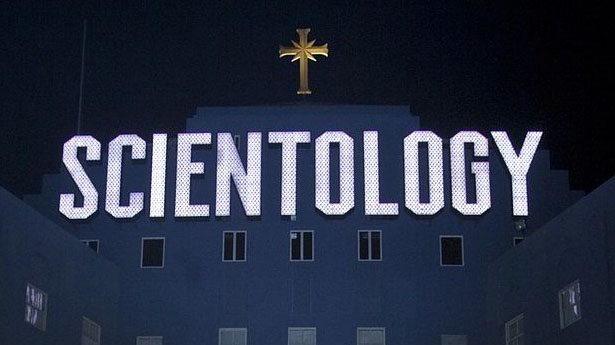 Scientologists have constructed an enormous underground “space alien cathedral” near Roswell in the United states, according to a BBC reporter.
John Sweeney, who has dedicated much of his career to investigating the secretive church, describes the multi-million dollar facility in his new book, Church of Fear.
“We are seeking the space alien cathedral that ex-Scientologists say was built deep underground by the church in the 1980s at a cost of millions of dollars,” says an extract from the book adapted for The Sun newspaper. Welcome to earth: The huge symbol etched into the desert in New Mexico next to the Scientology base dubbed the ‘alien space cathedral’

“Its vault houses the lectures of church founder L Ron Hubbard on gold discs locked in titanium caskets sealed with argon.
“The cathedral is H-bomb proof, protected by three 5,000lb stainless steel airlocks.
“Experts say the weird signs on top of the mountain [pictured] will guide Clears, (high-ranking Scientologists) returning from space to find Mr Hubbard’s works after a nuclear Armageddon wipes out humanity.”
Trementina Base is located beneath a mountain at Mesa Huerfanita, north of Roswell, New Mexico, according to the report.
Sweeney was denied entrance to the facility, and claims his companion received multiple mysterious phone calls from the church while staying in a nearby motel.
Ex-Scientologist Chuck Beatty told the Sun that the temple and its enormous symbolic markings were intended more for extra-terrestrial visitors than for the Church’s earthly members.
“The whole purpose of putting these teachings in the vaults was so that in the event that everything gets wiped out, someone would be willing to locate them and they would still be there,” he said.