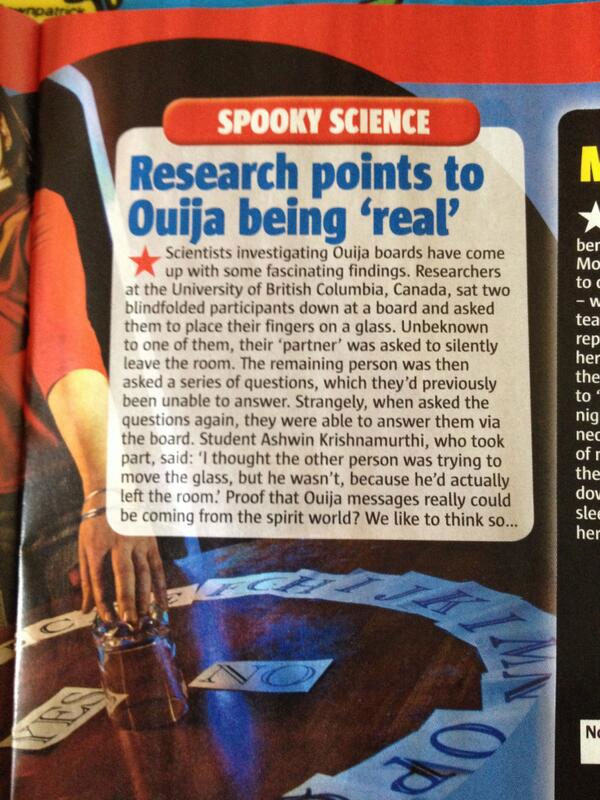 Canadian scientists have proven that Ouija boards have mysterious properties, according to Take a Break’s Fate and Fortune magazine of July 2014. In their “Spooky Science” section they reported that ‘Scientists investigating Ouija Boards have come up with some fascinating findings. Researchers at the University of British Columbia, Canada, sat two blindfolded participants down at a board and asked them to place their fingers on a glass. Unbeknown to one of them, their ‘partner’ was asked to silently leave the room. The remaining person was then asked a series of questions, which they’d previously been unable to answer. Strangely, when asked the questions again, they were able to answer them via the board.

Student Ashwin Krishnamurthi, who took part said: ‘I thought the other person was trying to move the glass, but he wasn’t, because he’d actually left the room.’ Proof that Ouija messages really could be coming from the spirit world? We like to think so…’

Proof, more like, that Take a Break either didn’t read the study properly, or misinterpreted it so that it would please their readers who, by large, believe in ghosts, psyhics, crystal healing, witchcraft and other similar fringe beliefs. Have UBC really proven that Ouija boards communicate with ghosts? No… but their research suggests something even cooler…

A feature on the UBC research in the Smithsonian Magazine reveals what actually takes place in the study (as well as providing an interesting insight into Ouija), while the Inner Intel Project, run by the UBC Visual Cognition Lab describes the research on their website as follows:

Ouijas have long been advertised as a means to communicate with the supernatural, which may be an easy misconception. The movements ouijas make have been studied in the past by psychologists, and are classified scientifically as ideomotor movements. This is the phenomenon we investigate at the lab, in order to see whether a connection between these involuntary movements and our subconscious really does exist.

In the abstract of their published research the UBC researchers explained that they were studying whether ideomotor actions could help participants express non-conscious knowledge. The abstract goes on to explain:

Results show that when participants believed they knew the answer, responses in the two modalities were similar. But when they believed they were guessing, accuracy was at chance for volitional report (50%), but significantly higher for Ouija response (65%). These results indicate that implicit semantic memory can be expressed through ideomotor actions. They also suggest that this approach can provide an interesting new methodology for studying implicit processes in cognition.

The UBC research may be on the way to demonstrating that Ouija boards can provide insight into the unknown, it’s just not the unknown that Take a Break would have you believe. Ghosts are quite boring in comparison to what research like this may be showing about consciousness.

Advertisement. Scroll to continue reading.
In this article:ghosts, ouija boards 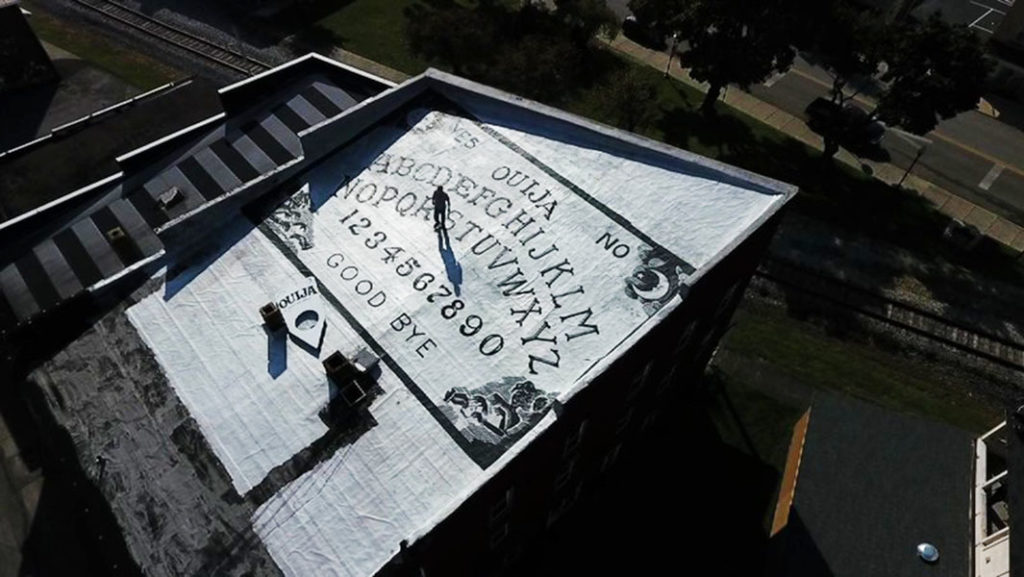