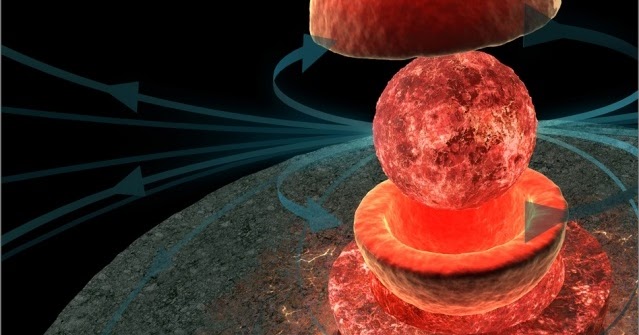 A conventional compass would be of little use on the moon, which today lacks a global magnetic field. But the moon did produce a magnetic field billions of years ago, and it was likely even stronger than the Earth’s field today. Scientists believe that this lunar field, like Earth’s, was generated by a powerful dynamo — the churning of the moon’s core. At some point, this dynamo, and the magnetic field it generated, petered out.

Now scientists from MIT and elsewhere have pinned down the timing of the lunar dynamo’s end, to around 1 billion years ago. The findings appeared in the journal Science Advances.

The new timing rules out some theories for what drove the lunar dynamo in its later stages and favors one particular mechanism: core crystallization. As the moon’s inner iron core crystallized, the liquid core’s electrically charged fluid was buoyantly stirred, producing the dynamo.

“The magnetic field is this nebulous thing that pervades space, like an invisible force field,” says Benjamin Weiss, professor of earth, atmospheric, and planetary sciences at MIT. “We’ve shown that the dynamo that produced the moon’s magnetic field died somewhere between 1.5 and 1 billion years ago, and seems to have been powered in an Earth-like way.”

Weiss’ co-authors on the paper are co-lead authors Saied Mighani and Huapei Wang, as well as Caue Borlina and Claire Nichols of MIT, along with David Shuster of the University of California at Berkeley.

Over the past few years, Weiss’ group and others have discovered signs of a strong magnetic field, of around 100 microteslas, in lunar rocks as old as 4 billion years. For comparison, Earth’s magnetic field today is around 50 microteslas.

In 2017, Weiss’s group studied a sample collected from NASA’s Apollo project, and found traces of a much weaker magnetic field, below 10 microteslas, in a moon rock they determined to be about 2.5 billion years old. Their thinking at the time was that perhaps two mechanisms for the lunar dynamo were at play: The first could have generated a much stronger, earlier magnetic field around 4 billion years ago, before being replaced by a second, more long-lived mechanism that sustained a much weaker field, through to at least 2.5 billion years ago.

“There are several ideas for what mechanisms powered the lunar dynamo, and the question is, how do you figure out which one did it?” Weiss says. “It turns out all these power sources have different lifetimes. So if you could figure out when the dynamo turned off, then you could distinguish between the mechanisms that have been proposed for the lunar dynamo. That was the purpose of this new paper.”

Most of the magnetic studies lunar samples from the Apollo missions have been from ancient rocks, dating to about 3 billion to 4 billion years old. These are rocks that originally spewed out as lava onto a very young lunar surface, and as they cooled, their microscopic grains aligned in the direction of the moon’s magnetic field. Much of the moon’s surface is covered in such rocks, which have remained unchanged since, preserving a record of the ancient magnetic field.

However, lunar rocks whose magnetic histories began less than 3 billion years ago have been much harder to find because most lunar volcanism had ceased by this time.

“The past 3 billion years of lunar history has been a mystery because there’s almost no rock record of it,” Weiss says.

Nevertheless, he and his colleagues identified two samples of lunar rock, collected by astronauts during the Apollo missions, that appear to have suffered a massive impact about 1 billion years ago and as a result were melted and welded back together in such a way that their ancient magnetic record was all but erased.

The team took the samples back to the lab and first analyzed the orientation of each rock’s electrons, which Weiss describes as “little compasses” that either align in the direction of an existing magnetic field or appear in random orientations in the absence of one. For both samples, the team observed the latter: random configurations of electrons, suggesting that the rocks formed in an extremely weak to essentially zero magnetic field, of no more than 0.1 microteslas.

The team then determined the age of both samples using a radiometric dating technique that Weiss and Shuster were able to adapt for this study.

The team put the samples through a battery of tests to see whether they were indeed good magnetic recorders. In other words, once they were reheated by some massive impact, could they have still been sensitive enough to record even a weak magnetic field on the moon, if it existed?

To answer this, the researchers placed both samples in an oven and blasted them with high temperatures to effectively erase their magnetic record, then exposed the rocks to an artificially generated magnetic field in the laboratory as they cooled.

The results confirmed that the two samples were indeed reliable magnetic recorders and that the field strength they initially measured, of 0.1 microteslas, accurately represented the maximum possible value of the moon’s extremely weak magnetic field 1 billion years ago. Weiss says a field of 0.1 microteslas is so low that it’s likely the lunar dynamo ended by this time.

The new findings line up with the predicted lifetime of core crystallization, a proposed mechanism for the lunar dynamo that could have generated a weak and long-lived magnetic field in the later part of the moon’s history. Weiss says that prior to core crystallization, a mechanism known as precession may have powered a much stronger though shorter-lived dynamo. Precession is a phenomenon by which the solid outer shell of a body such as the moon, in close proximity to a much larger body such as the Earth, wobbles in response to the Earth’s gravity. This wobbling stirs up the fluid in the core, the way swishing a cup of coffee stirs up the liquid inside.

Around 4 billion years ago, the infant moon was likely much closer to the Earth than it is today, and much more susceptible to the planet’s gravitational effects. As the moon moved slowly away from the Earth, the effect of precession decreased, weakening the dynamo and the magnetic field in turn. Weiss says it’s likely that around 2.5 billion years ago, core crystallization became the dominant mechanism by which the lunar dynamo continued, producing a weaker magnetic field that continued to dissipate as the moon’s core eventually fully crystallized.

The group is looking next to measure the direction of the moon’s ancient magnetic field in hopes of gleaning more information about the moon’s evolution.

This research was supported, in part, by NASA.

In this article:core crystallization, moon dynamo