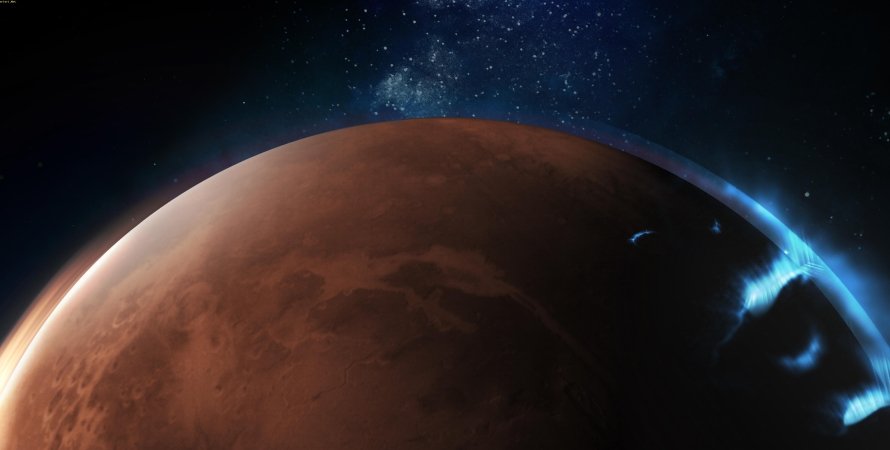 The UAE’s Al-Amal Mars probe entered orbit around the Red Planet in February 2021. Its scientific goal is to study the atmosphere of Mars and provide an in-depth understanding of the changes in a planet that has transformed from a water-rich world to a cold, dry desert, according to IFLS.

New images of Mars’ strange auroras were taken before the official launch of the mission. Scientists were checking instruments when they spotted the aurora on the dark side, which astronomers have been trying to study for years.

There are three types of auroras on Mars. One view on the day side and two on the night side. One of them occurs only during solar storms, illuminating the entire side of the planet, and the other, the one that was captured by “Al-Amal”, is known as discrete and is not associated with solar storms, but occurs only in certain places on the night side.

These three observations were made on April 22, April 23, and May 6, 2021 and show highly structured discrete auroras on the night side of Mars.

What is remarkable is their location. Instead of being near higher latitudes, like the auroras on Earth, they are in seemingly strange places far above the surface of the Red Planet. The reason for this is that their formation is different from our terrestrial northern and southern lights.

Particles charged from the Sun travel through the solar system. On Earth, they are directed by a magnetic field to northern latitudes, where they collide with the atoms that make up the atmosphere of our planet. These interactions release light, creating great effects at night.

With a thin atmosphere and no magnetic field, no spectacular aurora is produced. As mentioned, some of the intense auroras actually occur on the day side and have been recorded by orbiting observatories such as MAVEN. Particles from the Sun enter the atmosphere of Mars and illuminate it.

The auroras recorded by Al-Amal on the dark side have the same basic mechanism. But instead of being carried by the strong magnetic field of the entire planet, charged particles from the Sun move through scattered areas of magnetic rocks, creating auroras at different latitudes.

The Emirates Mars Ultraviolet Spectrometer (EMUS) was developed, among other things, to study these emissions. Observations not only expand scientists’ understanding of the impact of space weather on Mars, but also about other properties of the planet.