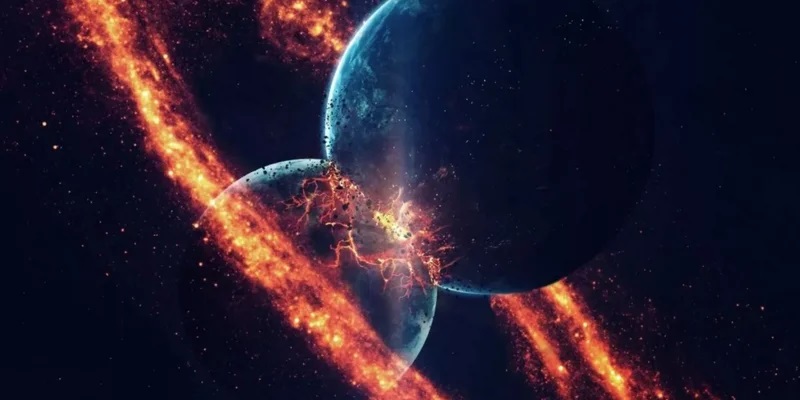 Mysterious clots floating in the mantle of our planet may be the remnants of the mantle of ancient Theia, a collision with which led to the appearance of the Moon.

These fragments are one of the largest and strangest structures on Earth: huge mysterious clots of dense rock, hidden deep in the lowest parts of the mantle of our planet, according to Science Alert.

The two giant masses include the so-called large areas with low shear rates (LLSVPs), one of which was buried under Africa and the other under the Pacific Ocean.

These anomalies are so huge that they give rise to their own deviations. For example, such a large phenomenon as the South Atlantic anomaly, which currently weakens the Earth’s magnetic field. As to how and why LLSVPs originated in the mantle in this way, experts have many ideas, but little solid evidence.

These giant clots have existed for a long time, and many scientists believe that they may have been part of the Earth before the giant impact of the Moon – the ancient traces of the Earth’s collision with the hypothetical planet Theia.

According to this hypothesis, Theia, the size of Mars, collided with Earth about 4.5 billion years ago, and a huge piece of Theia and / or possibly Earth broke off and became the Moon we know today. As for the rest of Theia, scientists do not know what happened to her. Was it destroyed, or did it just fly into space? Unknown.

Some researchers have suggested that the nuclei of these two primary planets may have merged into one, and that the chemical exchanges caused by this epic fusion allowed life itself to thrive in this newly created world.

Now scientists have returned to these monumental questions with another assumption. According to a new simulation conducted by researchers at the University of Arizona (ASU), LLSVPs may be ancient fragments of the dense and iron-rich Theia mantle. She plunged deep into the earth’s mantle when the two worlds merged and was buried there for a billion years.

“The lunar impact model is one of the most studied, but direct evidence for the existence of the Theia remains unclear. The Theia mantle may be several percent denser than the Earth’s mantle. This allows the Theia mantle materials to sink into the lowest part of the Earth’s mantle thermochemical clusters that can cause LLSVPs,” researchers explain, led by seismologist Qian Yuan of Arizona State University.

Although there have been suggestions for many years that LLSVPs may be an alien “surprise” given by Theia, the new study provides the most formulated explanation.

Ancient worlds may be buried within the Earth

However, the origin of LLSVP is not limited only to Theia – the Earth’s antiquity may in general be a planetary graveyard.

Scientists recently discovered several small, ultra-dense pockets of rock deep in the mantle that don’t quite match the surrounding material.

Jennifer Jenkins, a seismologist at the University of Durham, suggested that these rocks are remnants of other extraterrestrial worlds. If Jenkins’ theory is correct, then Theia may not be the only alien world buried underground.

Thus, early Earth was likely the victim of several catastrophic collisions, and many of the objects that collided with it are currently buried in its mantle.

In this article:earth core, moon