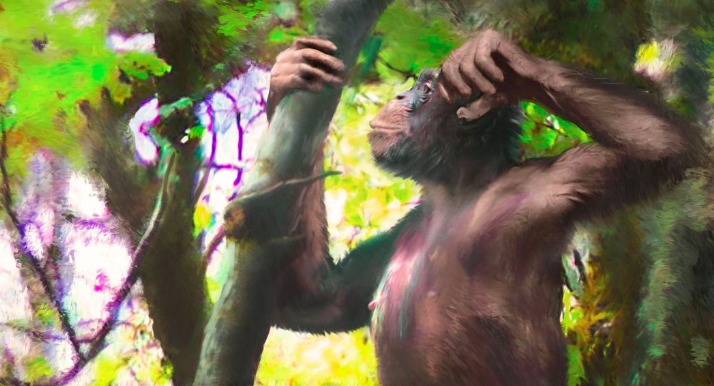 A previously unknown human ancestor can change the history of the evolution of walking on two legs.

Madeleine Boehme from the University of Tübingen and her colleagues from Germany, Bulgaria and the United States discovered in Bavaria the remains of an ancient monkey, who lived 11.6 million years ago, in the Miocene era. The new species called Danuvius guggenmosi, informs Journal Nature.

Anthropologists have studied fragments of skeletons of at least four individuals: a male, two females and one cub. The most complete skeleton belonged to the male. In terms of body proportions, it can be compared with modern bonobos. According to the findings of scientists, the growth of primacy reached one meter, the females weighed about 18 kilograms, and the males – about 31 kilograms. Thanks to the completely preserved bones of the limbs, it became possible to reconstruct how Danuvius guggenmosi moved .

“For the first time, we were able to investigate several important joints, including the elbow, thigh, knee and ankle, in one fossil skeleton of this age, ”said Professor Boehme.

As it turned out, the primate spine with an S-shaped bend helped to keep the body upright, so that the monkey stood on two legs. Structure, posture and modes of Danuvius guggenmosi  is a unique movement, according to scientists.

“Danuvius guggenmosi combines biped people dominated by the hind limbs, with climbing on the front extremities typical of modern monkeys, explained David Begun of University of Toronto. – The results show that human
bipedalism dates back to at least 11.6 million years ago. ”

In addition, as the authors of the discovery stated, unlike later hominins, who prefer the hind limbs, Danuvius guggenmosi possessed a powerful thumb, which allowed them to clutch at large and small branches, jump from tree to tree and, balancing, to maintain balance.

At the same time, these ancient primates had a wide and flat chest, and their lower back was elongated – all this helped them to correctly position the center of gravity over their elongated hips and knees, just like in humans. Thus anatomy of the D. guggenmosi indicates that the ancient primacy used both sets of limbs equally.

Scientists are also warned that the remains of  the D. guggenmosi were found in Europe, far from the place where, as many people think, ancient monkeys lived. The history of human evolution traditionally originates in Africa, but even before the appearance of some early humans, their primitive ancestors lived in forests that stretched across the Mediterranean.

“The skeletons found also indicate that the European ancestors of African monkeys and humans were different from the gorillas and chimpanzees living today,” concluded Professor Begun.

At the beginning of this year, scientists spent a comparison of neurons, which showed a possible cause of cognitive differences between monkeys and humans.