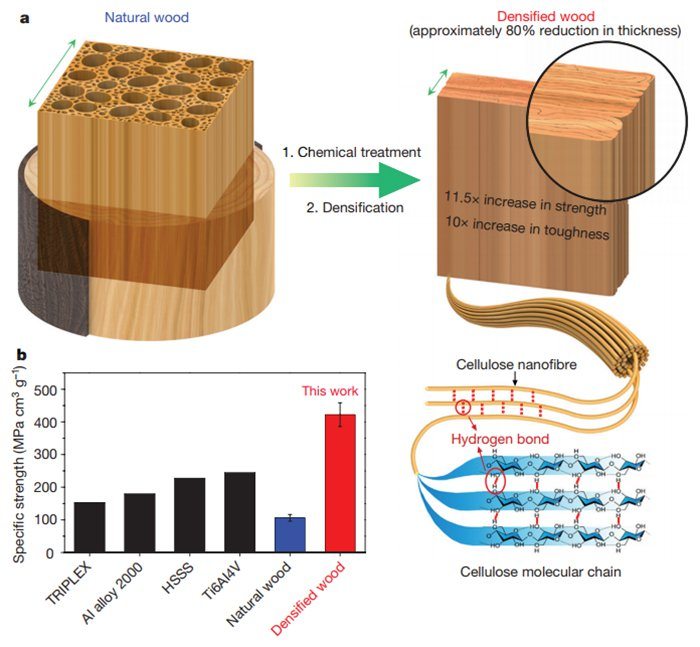 Scientists have developed a new type of “super wood” that is more than 10 times stronger and tougher than normal wood – and this innovation could potentially become a natural and inexpensive substitute for steel and other materials.

Key to the new wood’s superpowers is a special chemical treatment followed by a heated compression process. The resulting chemical bonds make the wood strong enough to one day be used in buildings and vehicles.

It could even take a turn in new armour plating – the researchers fired bullet-like projectiles at their new super wood and found they got lodged in the material rather than blasting their way through, as they did with standard-strength wood.

“This new way to treat wood makes it 12 times stronger than natural wood and 10 times tougher,” says senior researcher Liangbing Hu, from the University of Maryland.

“This could be a competitor to steel or even titanium alloys, it is so strong and durable. It’s also comparable to carbon fibre, but much less expensive.”

“It is both strong and tough, which is a combination not usually found in nature,” adds another of the team, Teng Li from the University of Maryland.

“It is as strong as steel, but six times lighter. It takes 10 times more energy to fracture than natural wood. It can even be bent and moulded at the beginning of the process.”

The new process used here has two steps. First, natural wood is boiled in a mix of sodium hydroxide and sodium sulphite, which is actually similar to the process made to create wood pulp for paper.

Next, the wood goes through a compression phase to collapse the walls between individual cells. Heat is added to encourage new chemical bonds while the wood continues to be compressed.

Those processes are able to strip out certain polymers to allow the new wood to reform while also keeping other polymers essential to the wood’s strength.

The strengthening ultimately comes from large numbers of hydrogen atoms bonding to nanofibres of cellulose, already naturally in the structure of the wood.

The chemical reactions are quite complex, but the procedure itself is actually pretty simple and inexpensive – and because wood literally grows on trees, it’s a promising option for replacing steel, titanium alloys, and other materials in certain situations.

The process has been shown to work on several different varieties of wood as well.

The finished super wood is strong, tough, and light, as we’ve already mentioned, but it’s also impressively dense, resistant to compression, hard and scratch-resistant, and even inherently protected against moisture.

As well as fitting it to aircraft and cars, the new super wood could also be used in furniture, allowing fast-growing woods like balsa or pine to replace denser but slower-growing options such as teak.

There’s a lot more work to do before you’ll see a wooden jumbo jet rolling down the runway though.

One of the next steps is to scale up and speed up the process of producing this new wood – though the researchers say that shouldn’t pose too much of a problem.

“It is particularly exciting to note that the method is versatile for various species of wood and fairly easy to implement,” says engineering scientist Huajian Gao from Brown University in Rhode Island, who wasn’t involved in the study.

“The [published] paper provides a highly promising route to the design of lightweight, high performance structural materials, with tremendous potential for a broad range of applications where high strength, large toughness and superior ballistic resistance are desired.”

The research has been published in Nature.