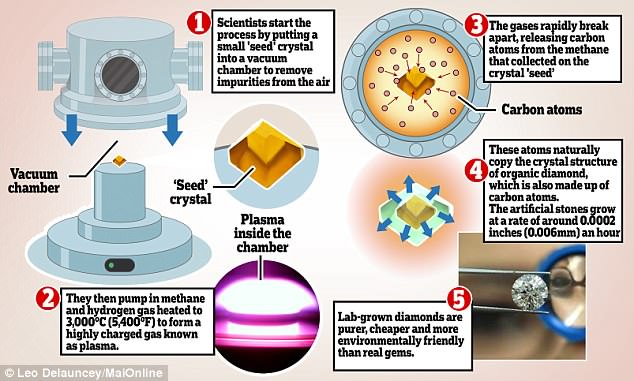 Scientists are ‘growing’ diamonds that are so pure they are almost indistinguishable from natural stones.

One-carat diamonds are cultured in a matter of days at a laboratory in Cardiff using just methane and hydrogen gas.

Researchers behind the project say the lab-grown stones are purer, 20% cheaper and more environmentally friendly than real gems.

Professor Oliver Williams, a physicist at Cardiff University, told Sky News: ‘The diamonds are purer than anything you would see in nature.

‘With the best growers, less than one atom in a trillion is an impurity.’

Professor Williams leads a team making diamond sheets for research into semi-conductors – but the same process can be used to grow decorative gems.

Scientists start the process by putting a small ‘seed’ diamond into a vacuum chamber to remove impurities from the air.

The gases rapidly break apart, releasing carbon atoms from the methane that collect on the diamond ‘seed’.

These atoms naturally copy the crystal structure of organic diamond, which is also made of carbon atoms.

Natural diamonds form over millions of years under high pressures and temperatures deep within the Earth’s crust.

Lab-made gems are threatening to upset the diamond industry, with several companies worldwide now growing the stones for jewellery.

An artificial diamond is typically 15-20 per cent cheaper than a natural stone of the same size.

‘We’re perfecting it and it’s an enormous accomplishment to grow a material that traditionally has been very difficult to grow.’

But although man-made diamonds are now being sold at some high-end jewellers – industry bosses say most customers prefer the real deal.

Jean-Marc Lieberherr, chief executive of the Diamond Producers Association, said the value of a gem is partly due to its sentimental quality.

‘The fact they cannot be distinguished with naked eye does not make them identical, or equal,’ he said.

‘Think of very good replica of a Picasso painting. We might not be able to tell it apart, but with the right equipment an expert will be able to.

‘One has enormous monetary and emotional value, one is a replica with no inherent or resale value. It’s the same thing with diamonds.’