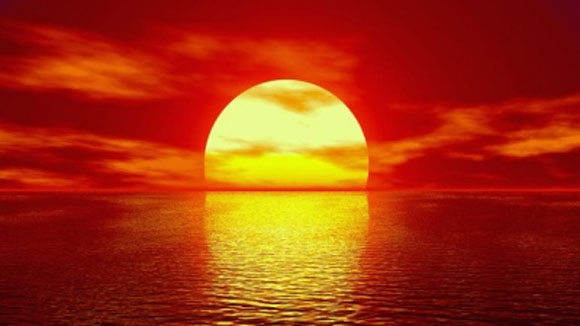 Gigantic leaks in the Earth’s protective shield are permitting radioactive solar particles to penetrate down to the surface of the planet causing electromagnetic pulses, brilliant auroras, even ultra-violet radioactive showers that could mutate DNA, cause virilent cancers, and change the dynamics of future life. “We hadn’t known about [this] before,” admitted Melvyn Goldstein, an astrophysicist at NASA’s Goddard Space Flight Center, about the potentially deadly phenomenon. Causing alarm among some scientists is the fact that as the plasma waves—known as the Kelvin-Helmholtz effect—slip past the Earth’s first line of defense they propigate gigantic and deadly vortices allowing raw radiation from the sun to pour in and bathe large regions of the planet. The sun gives life, mutates life, sometimes ends life. Astronomers have found stars similar to Earth’s sun that experienced violent coronal mass ejections frying away the atmospheres of all thier nearby planets. Can such a thing happen here? Nervous astronomers admit they don’t know.

Earth is trapped in orbit around the sun. If the sun partially explodes—or even ejects a massive X-flare in Earth’s direction—all life on the planet could cease to exist.

The only thing that protects the Earth from the violence of an angry sun is the magnetic bubble that surrounds the planet. Now, unfortunately, geophysicists and astrophysicists concur on one alarming fact: the Earth’s protective magnetosphere leaks like a sieve and periodically deadly rays was regions of the planet killing some life and mutating other life into a different path of evolution. “The solar wind can enter the magnetosphere at different locations and under different magnetic field conditions that we hadn’t known about before,” the co-author of the shocking study, Dr. Melvyn Goldstein, told concerned reporters at Science Daily.

“That suggests there is a ‘sieve-like’ property of the magnetopause in allowing the solar wind to continuously flow into the magnetosphere,” he explained.

A new study revealing the fragility of the magnetosphere was published August 29th in the prestigious and peer-reviewed Journal of Geophysical Research. The grim study confirms that the Earth’s first line of defense can not only be breached, but is breached much more often that anyone ever suspected. When highly charged solar particles slam through the shield the danger level is determined by the current activity of the sun. If the sun is in a highly excited state—as it is during its peak solar activity that will last through most of 2013—then the risk on the surface of the Earth increases exponentially.

At best radiowaves and satellites might be affected. NASA and the ESA worry about a blast that could knock out North America and send it reeling back to the 18th Century. The recent collapse of the infrastructure of the northeastern region of the United States from hurricane Sandy would be multiplied in severity and encompass the entire U.S., parts of southern Canada, and northern Mexico.

Yet, even that is not the worst case scenario. The collapse of the magnetic shield and deadly UV rays

A warning comes from Dr. Kyoung-Joo Hwang at NASA’s Goddard Space Flight Center. Hwang, the lead author of the magnetosphere study, is quoted by the Oregon Herald as saying, “We found that when the solar wind magnetic field is westward or eastward, magnetopause boundary layers at higher latitude become most subject to Kelvin-Helmholtz instabilities, regions quite distant from previous observations of these waves.” The research led the team to conclude that the breaches of the Earth’s fragile shield are worse than imagined: “…it’s very hard to imagine a situation where solar wind plasma could not leak into the magnetosphere, since it is not a perfect magnetic bubble,” Hwang emphasized.

Dr. Matt Taylor, ESA’s Cluster satellite project is one of the scientists that first discovered that, as the Oregon Herald reports, “that huge swirls of plasma along the magnetopause could help the solar wind penetrate the magnetosphere when the terrestrial and solar wind magnetic fields were aligned.” The rending of the magnetic field is much greater than once assumed. “In this case,” Taylor said, “the relatively small separation of the four Cluster satellites as they passed through the high-latitude dayside magnetopause provided a microscopic look at the processes ripping open the magnetopause and allowing particles from the Sun direct entry into the atmosphere.” Illustration of DNA damage from the sun

What this means during a period when the sun is ejecting intense coronal masses is the increased likelihood of partial or total technological foundational collapse—or worse, radiation exposure, poisoning and significant DNA mutation.

This latest finding just underscores the fact that the universe is a very dangerous, unforgiving environment.

Unfortunately, at least for now, this universe is the only one we have.

In this article:earth's defense, Nasa, vortices