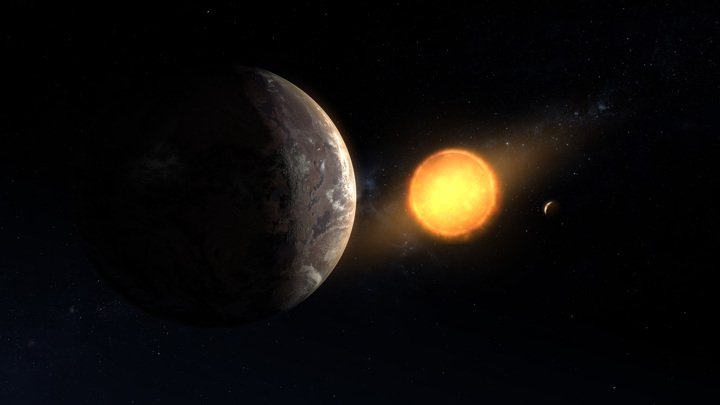 The Kepler-160 star and its satellite KOI-456.04 are more reminiscent of the Sun-Earth system than any previously known exoplanet star pair.

The Kepler-160 star probably has an orbit on a planet that is almost twice the size of Earth. The distance from the star to the planet allows you to allow the temperature of the surface of the planet, contributing to the development of life. Recently discovered by a group of scientists led by the Max Planck Institute for the Study of the Solar System (MPS) in Göttingen (Germany), the exoplanet is more than just a potentially inhabited world.

One of the key properties that makes this world look more like the Sun-Earth system than any other previously known world is its star, similar to the Sun. Most of the exoplanets known so far similar to the Earth are found in orbit around faint stars – red dwarfs that emit their energy mainly in the form of infrared radiation, and not visible light. However, the light emitted by a star like the Sun is very similar to daylight on our home planet. Moreover, the KOI-456.04 orbital period around the star is almost identical to the Earth year.

Space telescopes such as CoRoT, Kepler, and TESS have allowed scientists to discover about 4,000 extra-solar planets (planets around distant stars) over the past 14 years. Most of these planets are the size of the gas giant Neptune, about four times the size of the Earth, which are in relatively close orbits around their host stars.

Scientists have also discovered several small exoplanets, like Earth, which could potentially be rocky. A handful of these small planets are also at the right distance from their stars to potentially have moderate surface temperatures for the presence of liquid surface water – the main ingredient of life on Earth.

“The full picture of planet habitability also includes a glimpse of the quality of a star,” explains Dr. Rene Heller, MPS scientist and lead author of the new study.

Until now, almost all exoplanets are twice as large as the Earth, which can potentially have a mild surface temperature, are in orbit around red dwarfs.

Red dwarfs are known for their extremely long life. Life on an exoplanet in orbit around an old red dwarf can potentially last twice as long as life on Earth – for formation and development. But the radiation from the red dwarf star is mostly infrared, and not visible light, as we know it.

Many red dwarfs are also known for emitting high-energy flares and frying their planets, which subsequently become unsuitable for habitation.

Moreover, their weakness requires that any inhabited planet be so close to the star that stellar gravity begins to significantly deform the planet. As a result of tidal heating on the planet, deadly global volcanism can occur. The habitability of the planets around red dwarfs is widely discussed in the scientific community.

In a new research article, a group of scientists from MPS, the Sonneberg Observatory, the University of Gottingen, the University of California at Santa Cruz, and NASA announced the discovery of a candidate for a planet that is twice the size of the Earth and with moderate light from a solar star.

The star Kepler-160 is located at a distance of just over 3000 light years from the solar system. She was constantly in sight of the main mission of the Kepler telescope and was constantly observed from 2009 to 2013. Its radius is 1.1 of the radius of the Sun, and the surface temperature is 5200 degrees Celsius (300 degrees less than that of the Sun). It has a star-like luminosity very similar to the Sun, making it an astrophysical photograph of our own star.

The Kepler-160 star is known to be the host star of two exoplanets called Kepler-160b and Kepler-160c. Both of these planets are much larger than the Earth and are in relatively close orbits around their star.

Their surface temperature certainly makes them hotter than a baking oven. But the tiny changes in the orbital period of the planet Kepler-160c gave scientists hope for the discovery of a third planet.

A team of German and American scientists returned to archival data from the Kepler telescope to find additional planets around this star and check the planetary origin of the Kepler-160c orbit. Heller and his colleagues previously successfully discovered 18 forgotten exoplanets according to old Kepler data.

When searching for exoplanets, scientists usually look for repeated changes in the brightness of stars. These temporary blackouts, usually only one percent or less of the apparent brightness of the stars, can be caused by the fact that the planets pass through the disks of their stars – when viewed from Earth.

Their new search algorithm was critical to discovering a new candidate for the transit planet KOI-456.04. “Our analysis shows that Kepler-160 has not two, but four planets,” Heller summarizes the new study.

One of the two planets found by Heller and his colleagues is Kepler-160d, the previously suspected planet responsible for the distorted orbit of Kepler-160s. Kepler-160d does not show any transitions on the star’s light curve, and this was confirmed indirectly.

The light from Kepler-160 is visible light, very similar to sunlight. Given all this, the planet KOI-456.04 is located in the habitable zone of the star – a range of distances around the star that allows the presence of liquid water on the surface.

“KOI-456.01 is relatively large compared to many other planets that are considered potentially habitable. But it is the combination of this planetary size and a solar-type host star that makes it so special and familiar, ”Heller explains.

As a result, the surface conditions on KOI-456.04 can be similar to those known on Earth, provided that its atmosphere is not too massive and similar to the Earth. The amount of light received from the host star is about 93 percent of the sunlight received by the Earth. If KOI-456.04 has a mostly inert atmosphere with a soft, Earth-like greenhouse effect, then its surface temperature will be on average +5 degrees Celsius, which is about ten degrees below the average global temperature of the Earth.

At present, it cannot be completely ruled out that KOI-456.04 is actually a statistical randomness or systematic measurement error instead of a real planet. The team estimates the chances of having the planet KOI-456.04 at 85%, and 99% is required to obtain the official status of the planet.

While some of the Earth’s most powerful ground-based telescopes could confirm this candidate with observations during one of his upcoming transits, there is also hope that the future PLATO (ESA) space mission will be able to do this. It is planned that PLATO will be launched in 2026, and one of its main scientific goals is the discovery of planets the size of the Earth around stars similar to the Sun.

MPS is currently building a PLATO data center and is actively participating in the PLATO mission. If PLATO is oriented in such a way as to revise the data of the main Kepler mission, then KOI-456.04 will be able to become a confirmed planet and be studied by PLATO in more detail.