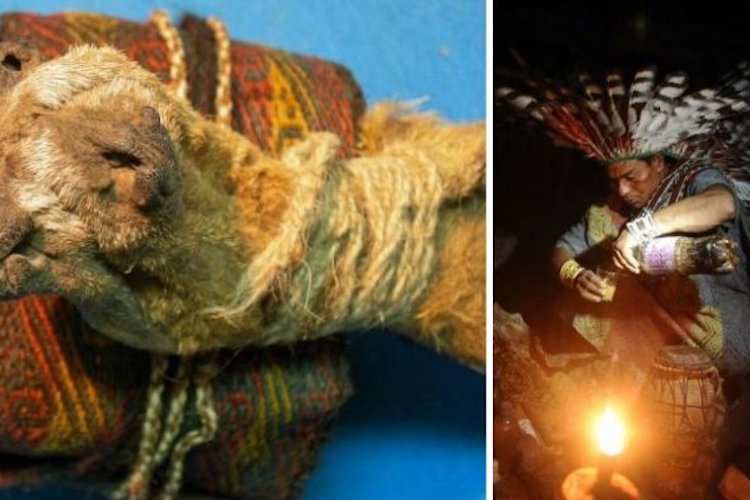 Archaeologists have found evidence of powerful psychotropic drugs inside of a 1,000-year-old leather pouch discovered in the Bolivian Andes. The pouch likely belonged to an indigenous shaman and contained traces of a dizzying array of plant-based psychoactive substances, ranging from coke to the ingredients used to brew ayahuasca, along with paraphernalia used to prepare and consume it.

The pouch—which is comprised of three fox snouts stitched together—contained two wooden tablets for grinding the plants into snuff, a woven headband, and a pipe-like tube with two human hair braids affixed to it that was used to smoke the psychotropic plants. 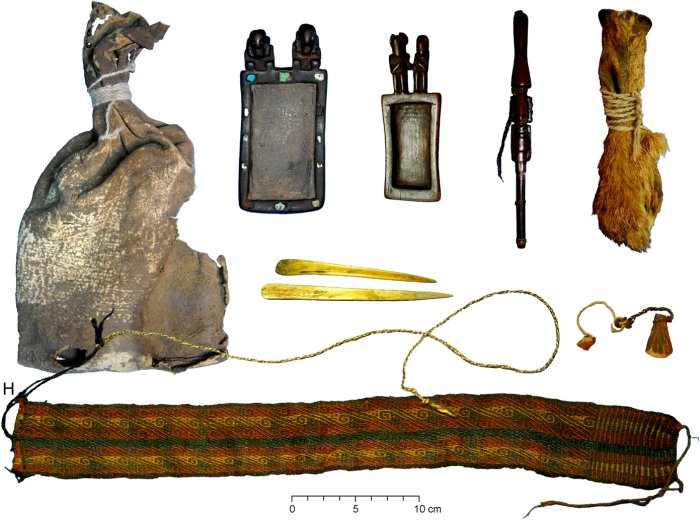 An analysis of the pouch revealed traces cocaine, harmine, benzoylecgonine, dimethyltryptamine (DMT), bufotenine and possibly psilocin, a chemical component of psychedelic mushrooms. The find constitutes the earliest evidence of the ceremonial use of ayahuasca, a hallucinogenic brew associated with the Amazon jungle.

Ayahuasca is a fairly loose term that describes a range of shamanic concoctions, with the main components typically being harmine and dimethyltryptamine. There has long been a consensus in the scientific community that psychedelic substances were commonly used by ancient cultures for their hallucinogenic effects, but the current find provides proof of their use for millennia.

The expedition and analysis was led by a team from the University of California, Berkeley, who made the find along the now-dry Sora River valley in the southwest of Bolivia back in 2010. There is evidence that humans have inhabited the region at least as far back as 4,000 years.

According to a press release from the university, the “remarkably well-preserved ritual bundle was found by archaeologists at 13,000-foot elevations in the Lipez Altiplano region of southwestern Bolivia, where llamas and alpacas roam. The leather kit dates back to the pre-Inca Tiwanaku civilization, which dominated the southern Andean highlands from about 550 to 950 A.D.”

The find shows that human society was capable of not only using single plants to embark on psychedelic journeys and hallucinations, but were also adept at combining plant ingredients into potent compounds that amplified and lengthened their trips.

“This is the first evidence of ancient South Americans potentially combining different medicinal plants to produce a powerful substance like ayahuasca.”

The range of different substances has led researchers to believe that the pouch is evidence of a major transcontinental trading zone capable of bringing medicinal plants and substances across great distances.

“Whoever had this bag of amazing goodies… would have had to travel great distances to acquire those plants [or] they had really extensive exchange networks.”

For example, while some of the chemical traces were derived from plants grown throughout South America, they are not known to have grown in the Andean region where the pouch was found. Likewise, the chemical harmine—a common ingredient in Ayahuasca—is known to only grow in the Amazonian lowlands.

“We already knew that psychotropics were important in the spiritual and religious activities of the societies of the south-central Andes, but we did not know that these people were using so many different compounds and possibly combining them together.

This is the largest number of psychoactive substances ever found in a single archaeological assemblage from South America.”

“Our findings support the idea that people have been using these powerful plants for at least 1,000 years, combining them to go on a psychedelic journey, and that ayahuasca use may have roots in antiquity.”

***This article (Scientists Discover 1,000-Year-Old Shamanic Pouch Containing Cocaine and Ayahuasca) was originally featured at The Mind Unleashed and is re-posted here with permission.

In this article:psychotropic drugs, shaman

You’ll Never Guess What Every Mass Shooting Has In Common, And It Isn’t Weapons

Whenever gun crimes are perpetrated, liberals love to point the finger of blame at law-abiding gun owners, but a list of mass shooters from...