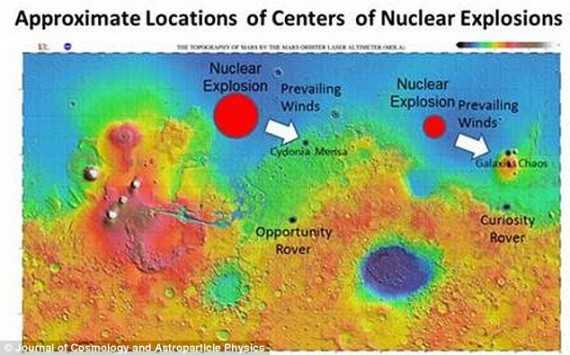 By Jonathan O’Callaghan for MailOnline

If you’re planning to go to the 2014 Annual Fall Meeting of the American Physical Society in Illinois this Saturday, you might be in for a bit of a surprise with the final talk of the day.

Because that’s when plasma physicist Dr John Brandenburg will present his theory that an ancient civilisation on Mars was wiped out by a nuclear attack from another alien race.

In his bizarre theory, Dr Brandenburg says ancient Martians known as Cydonians and Utopians were massacred in the attack – and evidence of the genocide can still be seen today.

Back in 2011 the scientist first postulated that the red colour on Mars could have been due to a naturally occurring thermonuclear explosion. ‘The Martian surface is covered with a thin layer of radioactive substances including uranium, thorium and radioactive potassium – and this pattern radiates from a hot spot on Mars,’ he told Fox News at the time. ‘A nuclear explosion could have sent debris all around the planet.’

But since then he has advanced his theory to the level that he now no longer thinks it was a naturally occurring explosion – but rather one planned by an intelligent alien race.

According to Vice, the conclusion of his latest paper says that nuclear isotopes in the atmosphere resembling hydrogen bomb tests ‘may present an example of civilisation wiped out by a nuclear attack from space.’

His research centres around the ‘high concentration’ of Xenon-129 in the Martian atmosphere, and uranium and thorium on the surface, spotted by Nasa’s Mars Odyssey spacecraft.

Scientists have previously pointed about that the appearance of these elements is not surprising, as they are natural elements found everywhere.

But Dr Brandenburg is adamant they are the remnants of two nuclear explosions on the surface.

He will lay out his research tomorrow in his talk titled ‘Evidence of Massive Thermonuclear Explosions in Mars Past, The Cydonian Hypothesis, and Fermi’s Paradox’.

And he is also apparently set to have a paper published in the Journal of Cosmology and Astroparticle Physics. Dr Brandenburg says evidence for the explosions exists near two sites that apparently had life in the past, including Cydonia, the location of the famous ‘face on Mars’ spotted from orbit. However, later images showed it was just a chance alignment of shifting dust dunes He says Mars once had an Earth-like climate home to animal and plant life, and any intelligent life would have been about as advanced as the ancient Egyptians on Earth.

This is based on his analysis of two regions, one being Cydonia, where the infamous – and later discredited – ‘face on Mars’ was found.

This, according to Dr Brandenburg, is an artefact from the ancient alien race.

Here, one of the supposed nuclear explosions wiped out the civilisation at Cydonia Mensa and another, smaller one destroyed a civilisation at a region called Galaxias Chaos.

‘Analysis of new images from Odyssey, MRO and Mars Express orbiters now show strong evidence of eroded archeological objects at these sites,’ he writes in the abstract for his research to be presented tomorrow.

‘Taken together, the data requires that the hypothesis of Mars as the site of an ancient planetary nuclear massacre, must now be considered.’ Dr Brandenburg says Mars once had an Earth-like climate home to animal and plant life, and any intelligent life would have been about as advanced as the ancient Egyptians on Earth

Dr Brandenburg says his theory could explain the Fermi Paradox – namely why, if the universe is abundant with life, we haven’t heard anything from anyone else yet.

He warns, though, that we need to be fearful of an attack on our own planet, and should mount a manned mission to Mars to know what we’re up against.

‘Providentially, we are forewarned of this possible aspect of the cosmos,’ he writes.

‘The author therefore advocates that a human mission to Mars is mounted immediately to maximise knowledge of what occurred.’

UFO expert Nigel Watson, author of the Haynes UFO Investigation Manual, told MailOnline that Dr Brandenburg is not the first to suggest Mars was ‘murdered’ by nuclear explosions.

‘These stories and many variations of them present a view that our Solar System was the home of several nuclear battles raged between alien visitors and settlers,’ he said.

‘Much of the evidence is either channeled through automatic writing, psychic messages or the interpretation of ancient texts.

‘Although Brandenburg’s theory is on more solid ground, it still amounts to speculation based on our present day awareness of the power of nuclear weapons and our fear of its misuse.

‘It is a warning that we could do the same to our own planet, and underlines the belief of many scientists that we have not detected intelligent life elsewhere in the universe because at some point civilisations will become extinct either through catastrophe or self-destruction.’