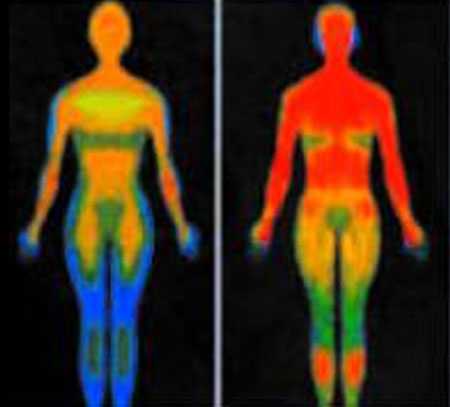 The timing of astral disembodiment in which the spirit leaves the body has been captured by Russian scientist Konstantin Korotkov, who photographed a person at the moment of his death with a bioelectrographic camera.

The image taken using the gas discharge visualization method, an advanced technique of Kirlian photography shows in blue the life force of the person leaving the body gradually.

According to Korotkov, navel and head are the parties who first lose their life force (which would be the soul) and the groin and the heart are the last areas where the spirit before surfing the phantasmagoria of the infinite.

In other cases according to Korotkov has noted that “the soul” of people who suffer a violent and unexpected death usually manifests a state of confusion in your power settings and return to the body in the days following death. This could be due to a surplus of unused energy.

The technique developed by Korotkov, who is director of the Research Institute of Physical Culture, St. Petersburg, is endorsed as a medical technology by the Ministry of Health of Russia and is used by more than 300 doctors in the world for stress and monitoring progress of patients treated for diseases such as cancer. Korotkov says his energy imaging technique could be used to watch all kinds of imbalances biophysical and diagnose in real time and also to show if a person does have psychic powers or is a fraud.

This technique, which measures real-time and stimulated radiation is amplified by the electromagnetic field is a more advanced version of the technology developed for measuring Semyon Kirlian aura.

Korotkov observations confirm, as proposed by Kirili, that “stimulated electro-photonic light around the tips of the fingers of the human being contains coherent and comprehensive statement of a person, both physically and psychologically.”

In this video interview Korotkov speaks of the effect in the bioenergy field with food, water and even cosmetics. And emphasizes one umbrella drink water and organic food, particularly noting that the aura of the people in the Undies suffers the negative effects of nutrients as technologization distributed in this society.

Korotkov also speaks of their measurements in supposedly loaded with power and influence that people have in the bioenergy fields of others. Checking Rupert Sheldrake’s experiment of the feeling of being watched : Because a person’s bioenergy field changes when someone else directs his attention, even though it is backwards and not consciously perceived. Also a place fields are altered when there is a concentration of tourists.

Also warns of cell phone use and their negative radiation often being carcinogenic, which several studies seem to confirm.

Korotkov hosting is optimistic that this new scientific field, which is a pioneer, is taking, especially in Russia, where some schools were teaching children to recognize and use energy, and not as a suspect but as a metaphysical quantifiable fact.

‘There is some staggering photographic and video evidence demonstrating some of the technologies, particularly shocking is the Oldfield Camera Filter which using a normal camera appears to show ghosts or other wordly entities clearly in photographs! Truly amazing stuff!

Harry, the author of ‘Harry Oldfield’s Invisible Universe’ goes on to demonstrate how through various technologies he is able to reveal aspects of this previously unseen universe in all their glory!

Three decades of research into this area and considerable practical application enable Harry to present some very convincing evidence that there is far more to the Universe than that which we currently experience with the 5 senses.’