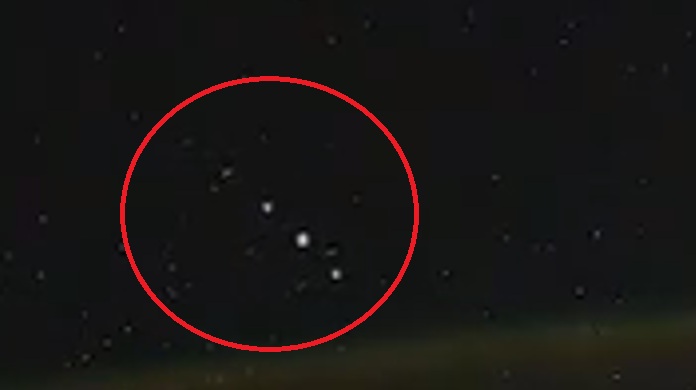 Russian cosmonaut Ivan Wagner reported to Roscosmos about the observation of a group of five UFOs flying in an even formation in Earth orbit. According to the astronaut, he recorded the appearance of a UFO while filming the Aurora Borealis.

The footage was taken from the International Space Station during the flight between Antarctica and Australia. Five UFOs flew parallel to the ISS and at the same distance from each other.

Ivan Wagner arrived on the ISS on April 9 this year. At the station, he performs the duties of a flight engineer as part of the crew of cosmonaut Anatoly Ivanishin and NASA astronaut Chris Cassidy.

Ivan Wagner, – “At 9-12 seconds, 5 objects appear, flying in a parallel course and at the same distance from each other.

The frames were taken 1 time per second, and then collected in a video of 25 frames / sec. That is, the real time of observation of objects is 52 seconds.

The information was communicated to the management of the Roscosmos State Corporation. Materials were transferred to TsNIIMash and IKI RAN for analysis. “

This is a significant event, because the astronaut working on the ISS officially reports on the observation of UFOs in the earth’s orbit.

Now everything will depend on the honesty or determination of Roscosmos to tell the earthlings the truth that UFOs fly in the orbit of our planet, not even in dozens, but in hundreds.

Ivan Wagner posted a very dark video, but we have filters that brighten and increase the contrast, and I applied these filters to that short video posted by the astronaut.

It is valuable because it is clean footage from orbit. yes, darkened to hide unnecessary details, but the real ones and the lighted video shows that not only these five UFOs fly in orbit, although they are of course interesting precisely because they fly in formation and have impressive dimensions, and besides them, the earth’s orbit is teeming and other UFOs.

I counted at least ten separate UFOs in this video, of different sizes, flying in different trajectories. At the very end of the video, where nothing is visible in the original recording, with an increase in contrast and brightness, a whole flotilla of some luminous objects flying below the ISS orbit becomes visible.

The Russian cosmonaut does not comment on this huge group of luminous objects, but the question remains – what was it in such a quantity that flew below the ISS? And what are these separate UFOs flying dozens of in near-earth space? Not to mention the even formation of five large UFOs.

Nathan Eismont, an authoritative expert at the Institute of Space Research at the Russian Academy of Sciences, suggested that unidentified flying objects in the lens of cosmonaut Ivan Wagner, who is on the ISS, may be reflections from the porthole or satellites of Elon Musk.

“The first thing that seems more likely is the reflections in the ISS porthole through which the pictures were taken,” Eismont said in a statement from the institute.

The expert explained that “the second explanation, which seems more interesting, is that we see reflections again, but now from Elon Musk’s Starlink satellites.”

“The fact that these lights are disappearing so fast is due to the rapid change in the relative positions of the ISS, the satellites and the light source – the Sun. The Starlink satellites are moving one after the other, the ISS is also moving and we see some of them. when the beam reflected by the satellites enters the camera, “added Eismont.

The scientist adds that in this case the movement of five objects in the frame is a projection of the observer, not their actual movement.

At the same time, Eismont emphasizes that this is a hypothesis that requires more accurate data and calculation time to confirm.

Will we get the answers? We honestly doubt it. The prevailing stereotype “taboo” on any information confirming the existence of UFOs may work, and so far even the recognition of the existence of UFOs by the Pentagon has not influenced the attitude of the official structures of countries to the problem of unidentified objects in orbit and in the atmosphere of the Earth.

In this article:Aurora Borealis, Roscosmos