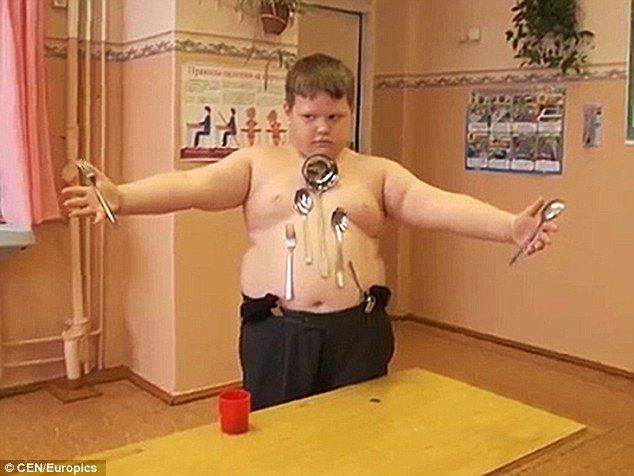 A schoolboy who was almost killed when knocked out by a massive electric shock now claims the accident gave him superpowers like those of X-Men’s Magneto.

Nikolai Kryaglyachenko, 12, had been walking home after school when he lent briefly against a lamp post that was live from a faulty wire, and was blasted across the pavement.

He said: ‘When I came round I felt groggy but managed to get home and told my mum what had happened.

‘When I woke up the next day and got out of bed I found some coins that had been lying on the mattress had stuck to my body. Then when I was having breakfast and dropped my spoon, it stuck to my chest.’

He said he is a keen fan of comics and, believing that maybe he had developed some sort of super magnetic power to attract metal like Magneto, had decided to put it to the test.

He said: ‘I can do things I couldn’t do before, but I don’t have a lot of control over it. Even when I do not want to do it, I still attract things. Once I even attracted a glass – it just moved towards me.‘ Nikolai pictured with a load of cutlery and coins sticking to his back. He claims he woke up with the ‘superpower’ after he suffered an electric shock

Nikolai added that he has now decided he wants to be a superhero when he is older, saying that he would want to do something that helped people.

He has also found himself one of the most popular boys at school with many of his classmates asking him to demonstrate his superpowers.

Stories about ‘living magnets’ began to appear at least in the middle of the 19th century.

In 2004, the story of a Russian factory worker Leonid Tenkaev and his family received extensive media coverage when he appeared to obtain the ability to attract objects after the Chernobyl nuclear disaster.

Although people who have the ability to attract metal items are commonly referred to as ‘magnets’, many of them can also hold plastic, glass, wood and paper items on their body.

Only some of them develop a ‘preference’ for a particular material.

In 1990, as many as 300 ‘living magnets’ gathered for a conference in Sofia, the capital of Bulgaria, after young woman Marinela Brankova demonstrated her amazing ability on TV. The woman could hold 7kg of metal on a vertical palm.

Scientists say however that rather than people being magnetic, it is probably nothing more than unusually sticky skin.