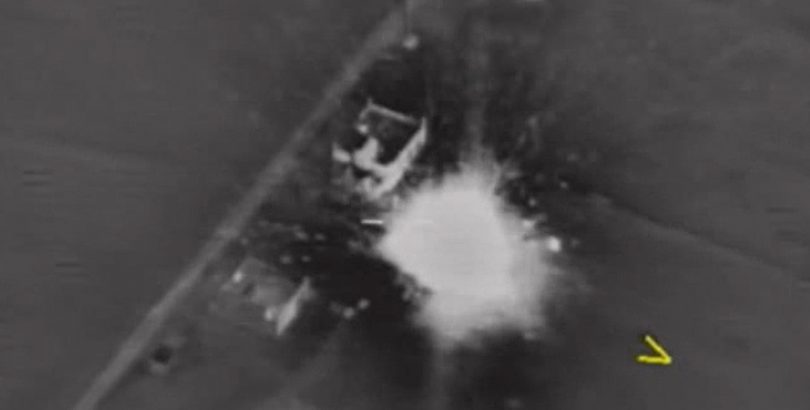 The Kremlin has spun yet another elaborate yarn in hopes of obscuring Vladimir Putin’s private war against a malevolent race of extraterrestrials called the Anunnaki.

On Saturday, the Russian Ministry of Defense reported that one of its fighter jets—an SU-25—was shot down in the Idlib province of Syria. Tahrir al-Sham, the extremist group linked to Al-Nusra terrorists, purportedly claimed responsibility, saying the band of freedom fighters had downed the aircraft using an American-made Stinger missile.

Our source, former KGB agent Strelnikov Isaac Stepanovich, says the official story is a smokescreen hiding a weary president’s struggles to cleanse the Earth of hostile visitors. According to Stepanovich, the Su-25 was conducting aerial surveillance on a suspected Anunnaki compound when it came under fire by direct energy weapons. The pilot ejected, and the aircraft plunged into the ground.

“Many people believe Putin is in Syria to bolster al-Assad’s regime, but it goes much deeper. The Anunnaki have been in Syria for a long time, and Putin tries to prevent the vermin from infesting other nations. There are many stories in Syria about the tall men entering villages at night and taking away the children. Because of the war, there are many orphaned, helpless children. These children are never seen again, and their stories are never reported. When the Ministry of Defense learned that tall men were spotted abducting children near Idlib, Putinordered an investigation, suspecting Anunnaki interference.”

Stepanovich said Russia used conventional aircraft because—after a previous encounter—the Anunnaki had apparently invented a means of masking themselves from satellite surveillance. The SU-25, he added, flew over an abandoned munitions factory and began photographing a squad of seven-to-fifteen foot tall humanoids lurking near the compound. The pilot reported his findings only seconds before a “green energy beam” sliced the airframe in half.

“The pilot was heard saying he was ejecting, and that was it,” Stepanovich said. “The official report says he survived the ejection but was later killed by terrorists. Fact is, the Anunnaki tore him limb from limb.”

In retaliation, Vladimir Putin ordered a massive airstrike on the encampment. Sorties of SU-30s and SU-34s slammed the Anunnaki stronghold with a combination of standoff and close-range munitions, bombarding the villainous extraterrestrials using a mixture of conventional weapons and, Stepanovich said, a proprietary technology known to be effective in killing the Anunnaki scourge. The facility was reduced to rubble, and a post battlefield damage assessment revealed no survivors. The blast incinerated everything and everyone.

Asked if Putin showed concern for missing children that might have been held captive at the factory, Stepanovich said, “President Putin loves children. He has two legitimate daughters and I won’t say any more than that. But make no mistake—this is war. There are more Anunnaki around, and avoiding collateral damage is impossible.”

Last night, the Ministry of Defense released camera footage of the carnage. It purportedly shows the destruction of the facility as well as humanoid targets attempting to flee the area. Scrutiny of the footage in parallel with digital forensic analysis, however, suggests the intended targets were anything but human.

“When we look at playback it’s very hard to determine size of a signature on screen. Obviously it’s dark and we’re looking at infra-red or night vision images. So, the Kremlin compares the video against archival footage of engagements against human targets. In doing so, they reached the conclusion these were large than human sized targets. Also, the video shows a fleeing target. We know the size of the size of the area, and we can see how far it ran before being struck. Based on this, simple math illustrates the target was sprinting at 65kph, too fast for any human.”

In contrast, in 2010, Olympian Usain bolt was clocked at 44.7 kph, the highest human sprinting speed ever recorded.

In closing, we asked Stepanovich why Putin doesn’t come clean and tell the world about his war on the Anunnaki, to which he replied, “There are many reasons. Primary among them is the Russian Orthodox Church. It has begged Putin to conceal this information, fearing knowledge of the Anunnaki and their origins would shatter tenets of Russian faith. Also, the first round of the presidential election begins in March. The church told Putin any such disclosure would compromise his reelection.”

Advertisement. Scroll to continue reading.
In this article:Anunnaki, Russia