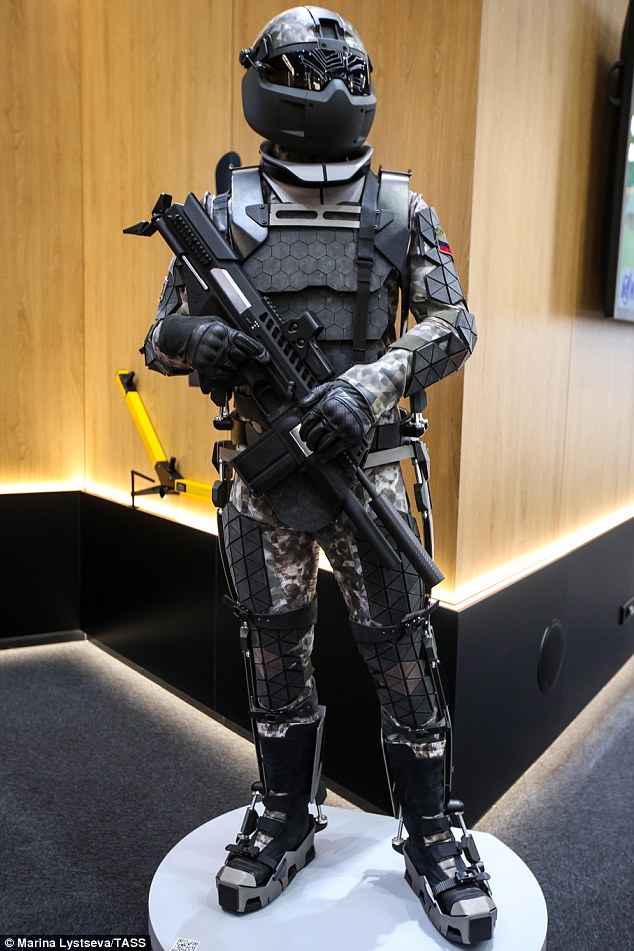 Russia has showcased a sleek new super soldier exoskeleton that will endow the wearer with superhuman powers.

The suit resembles the work of science fiction, with a design reminiscent of the Stormtroopers in ‘Star Wars’, or the fictional mechanical police officer in ‘RoboCop’.

Donning the suit allows soldiers to carry huge amounts of weight while also being able to run faster than would normally be physically possible.

Military firm TsNiiTochMash developed the Ratnik-3 ‘Soldier of the Future’ suit which was paraded at the Army 2018 International Military and Technical Forum in Moscow.

Built of titanium, the exo-skeleton is designed to boost strength and stamina while a layer of body armour protects the wearer from any incoming bullets and shrapnel.

The skeleton fits over the torso and is secured around the waist, dispersing the weight of the built-in backpack, which can be filled up to 110 pounds (50kg).

‘It really enhances a serviceman’s physical abilities. For example, the tester was able to shoot from a machine-gun only with one hand and accurately hit targets.’

The prototype exo-suits are currently held back by one major issue – there is no room to storage a local power source.

This means the suit can only be worn and used for a limited amount of time before it becomes dead weight.

The firm claims it will continue to improve the design before it is introduced to battlefields in 2025.

It says it is confident it will be able to address the battery issue.