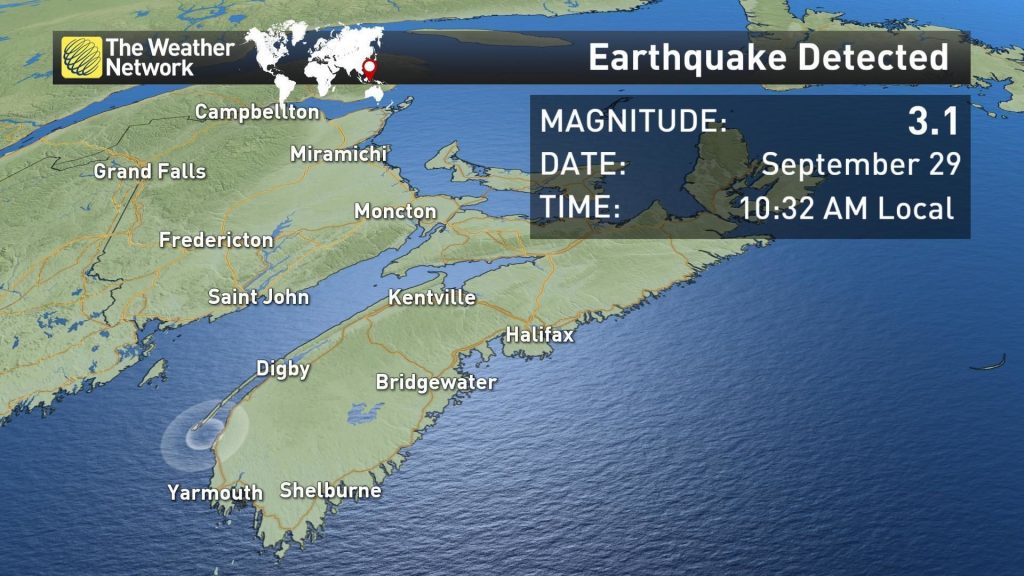 It’s strange how some earthquakes, even though small in magnitude create rumbling sounds and booms!

via The Weather Network:

Earthquakes Canada reports that the quake occurred just off the coast in the area of Mavillette, N.S., near Meteghan, at 10:32 a.m.

Tina Helprin, who lives in Saulnierville Station, said she was sitting in her rocking chair in the kitchen when the quake happened.

Helprin said the entire house shook and her border collie, Cree, ran up to her, “petrified.”

“I just looked at my husband with big eyes and he looked at me right away…. I said, ‘That was not thunder.’ And he said, ‘Nope, it sure wasn’t,’” she said.

Felt From Digby To Yarmouth

Earthquakes Canada seismologist Michal Kolaj said the agency had received about 60 reports from residents between Digby and Yarmouth by Sunday morning.

“This earthquake isn’t terribly unusual for the region,” Kolaj said, adding that quakes are felt in the area every couple of years.

In 2015, a 3.6 magnitude tremor shook the area about 60 kilometres southwest of Digby on Canada Day. In 2016, a 3.0 magnitude quake was centred about 19 kilometres north of Yarmouth.

Kolaj said there were no reports of damage from the quake on Saturday morning, and none would be expected, given the magnitude.

The seismologist encouraged residents to report their experience of the earthquake to help researchers understand how quakes of different magnitudes are felt.

Advertisement. Scroll to continue reading.
In this article:Earthquakes Canada