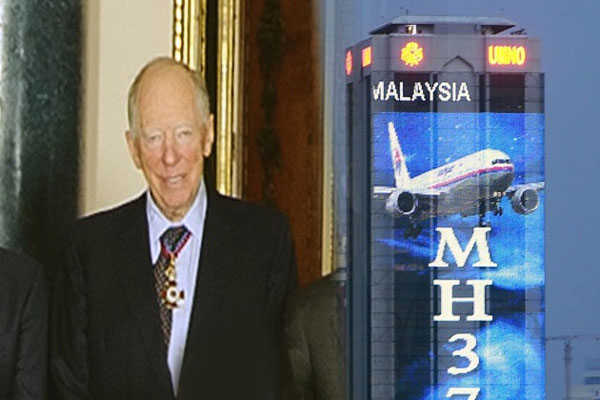 The disappearance of four members of a patent semiconductor traveling on Malaysia Airlines MH370 makes the famous billionaire Jacob Rothschild at the sole owner of the important patent.

The mystery surrounding the Malaysian Airlines MH-370 is growing as each day passes with more mysterious silence shadowing the disappearance of the airline. More and more conspiracy theories are beginning to boom on the internet. One of the conspiracies one is the Freescale Semiconductor’s ARM microcontroller ‘KL-03′ which is a new improvised version of an older microcontroller KL-02. This crazy story about how Illuminati Rothschild exploited the airlines to gain full Patent Rights of an incredible KL-03 micro-chip is going haywire across the internet especially when it’s involving Jacob Rothschild as the evil master plotter.

A US technology company which had 20 senior staff on board Malaysia Airlines Flight MH370 had just launched a new electronic warfare gadget for military radar systems in the days before the Boeing 777 went missing.

Freescale Semiconductor has been developing microprocessors, sensors and other technology for the past 50 years. The technology it creates is commonly referred to as embedded processors, which according to the firm are “stand-alone semiconductors that perform dedicated computing functions in electronic systems”.

Why were so many Freescale employees traveling together? What were their jobs. Were they on a mission and if so what was this mission? Can these employees be the cause of the disappearance of this plane? Could the plane have been then hijacked and these people kidnapped? Did these employees hold valuable information, did they have any valuable cargo with them? Did they know company and technological secrets? With all the might of technology why cant this plane be located? Where is this plane where are these people?”

“These were people with a lot of experience and technical background and they were very important people,” Haws said. “It’s definitely a loss for the company.”

In Malaysia, Freescale’s modern operations facility that manufactures and tests integrated circuits (IC) is based in Petaling Jaya.

Based on information obtained from Freescale’s website, the facility began operations in 1972 covering an eight hectare site and is specifically designed for the manufacturing and testing of microprocessors, digital signal processors and integrated radio frequency circuits.

It also owns Freescale RF which is involved in creating solutions for Aerospace and Defence listed below. Carlyle’s previous heavyweight clients include the Saudi Binladin Group, the construction firm owned by the family of Osama bin Laden.

The fact that Freescale had so many highly qualified staff on board the Boeing 777 had already prompted wild conspiracy theories about what might have happened.

The company says they were flying to China to improve its consumer products operations, but Freescale’s fresh links to electronic warfare technology is likely to trigger more speculation and deepen the mystery.

Experts have been baffled how a large passenger jet seems to have flown undetected and possibly beaten military radar systems for up to six hours.

Avoiding radar via “cloaking technology” has long been one of the objectives of the defense industry and Freescale has been active developing chips for military radar.

On its website, the company says its radio frequency products meet the requirements for applications in “avionics, radar, communications, missile guidance, electronic warfare and identification friend or foe”.

Last June it announced it was creating a team of specialists dedicated to producing “radio frequency power products” for the defense industry.

And on March 3, it announced it was releasing 11 of these new gadgets for use in “high frequency, VHF and low-band UHF radar and radio communications”.

The company did not respond to questions from Express Online, including whether any of its missing employees had been working on the defense products.

It neither provided any responses to the latest bizarre conspiracy theory being widely published on the comments sections of newspaper websites and other internet forums.

The comment reads: “It reads: “Have you pieced together the puzzle of missing flight 370 to Beijing China? If not, here are your missing pieces.

Four days after the  flight MH370  disappear, semiconductor patent was approved by the U.S. patent office patent is divided in parts of 20% between five starters. One of the owners is the company itself, Freescale Semiconductor, Austin, Texas (USA), and the other four Chinese employees of the company: Peidong Wang, Zhijun Chen, Cheng and Li Ying Zhijong, all the Suzhou City. And they all passengers of Malaysia Airlines plane disappeared on March 8, according Eternity .

It adds: “Here is your motive for the missing Beijing plane. As all four Chinese members of the Patent were passengers on the missing plane.

Patent holders can alter the proceeds legally by passing wealth to their heirs. “However, they cannot do so until the Patent is approved. So when the plane went missing, the patent had not been approved.”

However, the absurd theory does not add up.

Although a Freescale patent does exist under number US8650327, none of the names listed actually appear on the passenger manifest released by the Malaysian authorities. ( But maybe the names have been removed from the flight manifest)

The search continues for Flight MH370 but speculation surrounding its fate grows by the day.