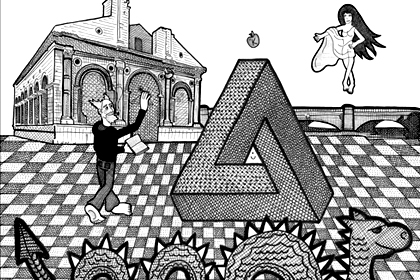 The following is an excerpt from Jesse Walker’s new book, The United States of Paranoia: A Conspiracy Theory. The excerpt is part of the chapter “Operation Mindfuck” and focuses on the role of the Discordian Pope, Robert Anton Wilson.

[Robert Anton] Wilson laid out the basic instructions for Operation Mindfuck in a memo sent to several friends (including [Paul] Krassner). Participants were “to circulate all rumors contributed by other members,” and they were “to attribute all national calamities, assassinations or conspiracies to the other member-groups.” The one great risk, he cautioned, was that “the Establishment might be paranoid enough to believe some wild legend started by one of us and thereupon round up all of us for killing Abraham Lincoln.”

So they sent a letter on Bavarian Illuminati stationery to the Christian Anti-Communist Crusade, just to confirm that “we’ve taken over the Rock Music business. But you’re still so naïve. We took over the business in the 1800s. Beethoven was our first convert.” Robert Welch of the John Birch Society got a letter informing him that Gary Allen was an Illuminati agent. When a New Orleans jury refused to convict one of the men Jim Garrison blamed for the JFK killing, Garrison’s booster Art Kunkin of the leftist Los Angeles Free Press received a missive from the “Order of the Phoenix Angel” revealing that the jurors were all members of the Illuminati. The telltale sign, the letter explained, was that none of them had a left nipple.

The Discordians planted stories about the secret society in various leftist, libertarian, and hippie publications, introducing the Illuminati to the counterculture. “We accused everybody of being in the Illuminati,” Wilson recalled. “Nixon, Johnson, William Buckley, Jr., ourselves, Martian invaders, all the conspiracy buffs, everybody.”

did not regard this as a hoax or prank in the ordinary sense. We still considered it guerrilla ontology.

My personal attitude was that if the New Left wanted to live in the particular tunnel-reality of the hard-core paranoid, they had an absolute right to that neurological choice. I saw Discordianism as the Cosmic Giggle Factor, introducing so many alternative paranoias that everybody could pick a favorite, if they were inclined that way. I also hoped that some less gullible souls, overwhelmed by this embarrassment of riches, might see through the whole paranoia game and decide to mutate to a wider, funnier, more hopeful reality-map.

They inserted that chart into The East Village Other. They placed odd ads in Innovator. They practically took over the Chicago paper rogerSPARK, which once had been a fairly staid New Left outlet affiliated with the 49th Ward Citizens for Independent Political Action. The Discordians filled it with anarchist politics and surrealist satire: Someone scanning the classifieds might see an ad declaring, “paranoids unite; you have nothing to fear but each other! Send for the informative booklet ‘How to Start Your Own Conspiracy’. Free from the Office of the District Attorney, New Orleans.” In the summer of 1969, the paper accused Chicago’s mayor of being an arm of the octopus, running the front-page headline DALEY LINKED WITH ILLUMINATI.

In the April 1969 edition of the Playboy Advisor column, right after an inquiry about blue balls, this missive appeared:

I recently heard an old man of right-wing views—a friend of my grandparents’—assert that the current wave of assassinations in America is the work of a secret society called the Illuminati. He said that the Illuminati have existed throughout history, own the international banking cartels, have all been 32nd-degree Masons and were known to Ian Fleming, who portrayed them as SPECTRE in his James Bond books—for which the Illuminati did away with Mr. Fleming. At first, this all seemed like a paranoid delusion to me. Then I read in The New Yorker that Allan Chapman, one of Jim Garrison’s investigators in the New Orleans probe of the John Kennedy assassination, believes that the Illuminati really exist. The next step in my galloping descent into credulity occurred when I mentioned this subject to a friend who is majoring in Middle Eastern affairs. He told me the Illuminati were actually of Arabic origin and that their founder was the legendary “old man of the mountains,” who used marijuana to work up a murderous frenzy and who fought against both the Crusaders and the orthodox Moslems, adding that their present ruler is the Aga Khan; but, he said, it is now merely a harmless religious order known as Ismailianism.

I then began to wonder seriously about all this. I mentioned it to a friend from Berkeley. He immediately told me that there is a group on campus that calls itself the Illuminati and boasts that it secretly controls international finance and the mass media. Now (if Playboy isn’t part of the Illuminati conspiracy), can you tell me: Are the Illuminati part of the Masons? Is Aga Khan their leader? Do they really own all the banks and TV stations? And who have they killed lately?

The letter was signed “R.S., Kansas City, Missouri,” but it had actually been cooked up by Wilson and Thornley. Wilson’s reply, written in the light and neutral tone expected of the Playboy Advisor, cleared up most of the historical confusions contained in the letter (though it added the unsupported claim that Weishaupt’s Illuminati were “based loosely” on the Old Man of the Mountain’s order). The Berkeley Illuminati, Wilson added, were “a put-on by local anarchists.”

It wasn’t always easy to tell where Operation Mindfuck ended and sincere paranoia began. “The Discordian revelations seem to have pressed a magick button,” Wilson later wrote. “New exposés of the Illuminati began to appear everywhere, in journals ranging from the extreme Right to the ultra-Left. Some of this was definitely not coming from us Discordians.” Not that it was always clear who “us Discordians” were either. Though some of the Berkeley Illuminati were acquainted with Thornley, they had independently invented the joke of posing as an ancient conspiracy. At one point, Wilson recalled, the Los Angeles Free Press printed “a taped interview with a black phone-caller who claimed to represent the ‘Black Mass,’ an Afro-Discordian conspiracy we had never heard of. He took credit, on behalf of the Black Mass and the Discordians, for all the bombings elsewhere attributed to the Weather Underground.”

Wilson and Thornley met only once in that period, when Wilson spent the night at Thornley’s place in Tampa in 1968. They smoked some pot and started ruminating about their project. “What if there really is an Illuminati?” Wilson asked. “Maybe they’ll find out about us and be pissed.”

“I doubt if there is,” Thornley replied. “And if there by some chance is, they would probably be very happy to have wildass fools like us covering up for them by spreading bizarre theories.”

In 1969, Wilson and another Playboy editor, Robert Shea, began to work on what would become the most influential element of Op eration Mindfuck. Inspired by the nutty letters the magazine often received, Shea and Wilson decided to write a novel “perched midway between satire and melodrama, and also delicately balancing between ‘proving’ the case for multiple conspiracies and undermining the ‘proof.’” The result was Illuminatus! It was basically finished in 1971 but it wouldn’t be published for another four years, with significant cuts and with the book sliced into three volumes.70 (A one-volume edition finally appeared in 1984.)