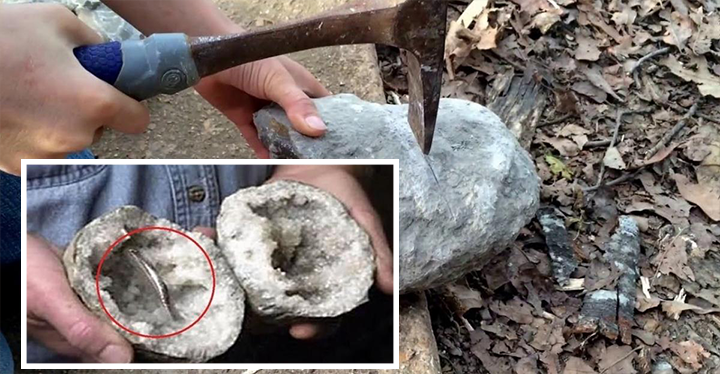 There has been a wealth of documented artefacts found within very ancient sediment, coal seams, minerals, and even stones and geodes.

All indicating that a vastly different story has taken place upon our earth, to that of what the majority, stubbornly persist in assuming.

So many pieces of evidence in fact, it seems, that it has been an impossible task for an unknown group of tyrants, who, for whatever reason, have attempted to conceal or suppress such discoveries… Or more importantly, hide the historical tales in which they are all trying to tell us.

And these next three, are no exception.

The Lanzhou Stone, Discovered in 1999 by Zhilin Wang in a remote mountainous area in northwest China.

Upon research being undertaken it was established to be unexplainable.
The rock is made of an unknown material, and the metal artefact embedded within, may quite possibly have alien origins.

“More than 10 geologists, physicists and other specialists from such institutes as the National Land Resources Bureau of china, the Institute of Geology and Minerals Research, and the School of Resources and environment, all eventually studied the possible origins of the stone.

The results of these examinations, the possible explanations for its formation or indeed origin, were never released.

Amazingly however, the scientists unanimously concluded that the stone is currently one of the most valuable in China, or possibly the world… When pressed for further explanation it was disclosed that the rock will apparently be extremely important for future research and quote, “Archaeological studies.”

Any further disclosure regarding the scientist’s discoveries has remained elusive…
The Wolfsegg Iron, has a similarly suppressed story, over 20 million years old, this extremely ancient, and clearly once worked cube of iron, may have also come from space.

Indeed, that is a conclusion many educated researchers arrived at. Although attempts to discredit such claims involve recent testing which has shown the cube lacks usual elements present in meteoritic material… They all avoid mentioning its strong magnetic characteristics, a signature uncannily similar to that found in meteorites and other objects with an “other worldly” origin.

It was discovered when a workman at the Braun iron foundry in Schondorf, Austria, was breaking up a block of lignite that had been mined at Wolfsegg.

In 1886, mining engineer Adolf Gurlt reported the object to the Natural History Society of Bonn, who noted that the object was coated with a thin layer of rust, was made of iron, and had a specific gravity of 7.75.

Early descriptions of the object appeared in contemporary editions of the scientific journals Nature and L’Astronomie, identified at the time by numerous scientists as being a fossil meteorite.

Now virtually unanimously concluded to have been manmade, it has thus been unexplainable… stolen at one point, it was strangely returned to another museum, now without a compelling mainstream explanation, it has simply been condemned to the history books as some form of elaborate hoax.

Impossible artefacts have been found in the most unusual of places, for example, a seemingly unbreakable piece of unknown metal, possibly a ring of ancient, or, according to man’s official history, alien origin found within a Geode, encapsulated for over 200 million years…

It is now largely presumed that the object was quickly sold to a private collector, most people begin with good intentions but sadly, are often allured away by various means of temptation, subsequently allowing such relics to disappear into the archives of the past.

This is mikes contact email to coast to coast, Quote:

“My name is Mike Walters and I’m an amateur geologist. I often come across geodes.
I have opened thousands of these and have found beautiful crystal and mineral deposits. However, I have never found anything like this: it appears to be polished metal”

This report, and the accompanying image, it seems, is all that we will ever see regarding this compelling artefact.

A mysterious fate experienced by many such artefacts, for example, sadly, only the wolfsegg iron now remains in the public domain for future testing.
What secret within our past is felt by some clearly powerful people, as an imperative to keep concealed from the majority of the world?

Maybe the question should be, will we ever be ready, or indeed able to find out…

In this article:China, unknown material