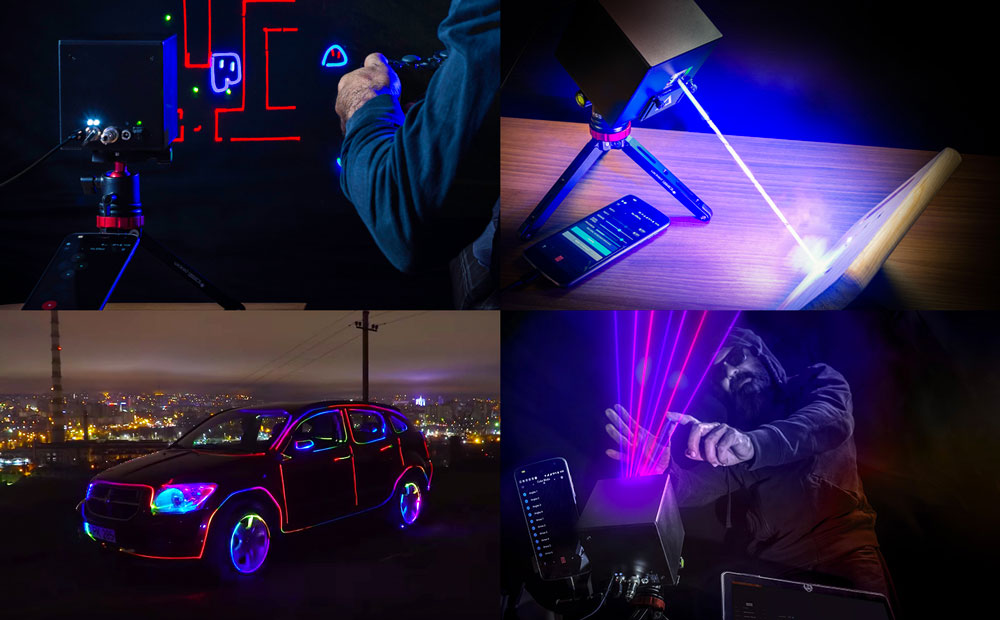 Wicked Lasers’ latest gadget is one of the most mesmerizing and compelling toys we’ve played with in a long, long time. It’s also extremely dangerous, powerful enough to pop balloons, etch patterns on wood, and surely fry the odd retina if used incorrectly.

The LaserCube starts at US$499, and is essentially a highly portable, battery-powered RGB laser projector. Weighing 3 lb (1.4 kg) and measuring about 4 in (10 cm) per side, it sits happily on top of a tripod head, and uses high-speed mirrors to blast laser beams about the place in 33,000 colors.

Direct those laser beams into a single point at full power, and you’ve got an 800- or 1,000-mW beam (depending on which version you’ve got) capable of burning through wood. Or, you can use it to project stunning, hypnotic full-color patterns and animations onto walls, buildings, screens or any other surface.

The LaserCube’s companion software LaserOS (for Mac, PC and Android at this stage) comes pre-loaded with literally hundreds of animations, images and sonic visualizers that can paint the world with go-go-dancers, endless looping tunnels, or brilliant laser artwork in an array of styles that seem to go on forever. Point it at the side of a building from a decent distance, and your working area can be enormous – the beams are so powerful that they operate at impressive distances.

What’s more, many of the preset animations (and effects you can apply to those animations) are designed to work in time with music, and music is pretty much mandatory when it comes to enjoying the LaserCube’s extraordinary displays. The animated dancers find the beat and move to it, the sonic visualizers scan the frequency and amplitude of what’s playing and create motion artwork from it all. Honestly, one of the hardest things about writing this review is that every time I turn the thing on, I get utterly mesmerized and forget what I was doing.

Effectively, it’s a nightclub-grade laser in a box that’s small enough to carry about, with a battery that lasts three hours and that you can run off your phone. You can even play games on the damn thing. They’re crappy games, with terrible controls, but they’re on the side of a freakin’ building. And everyone I’ve switched it on for has fallen in love immediately. It’s absolute magic, there is no comparison between the way this thing makes light dance and a regular 1080p projector. None. Add smoke so you can see the beams darting around, and it’s even wilder.

It’s also – and I find it hard to get over this – super dangerous, despite the fact that multiple layers of safety gear are provided. To get the LaserCube going, you need to attach a special safety dongle, turn it on, then turn a separate safety key, then unscrew the shield from the front and let it drop out of the way, then hook it up to a laptop or a phone and turn it on.

But as soon as you’ve done that, you’ve got a 1,000-mW laser at your command. To put that in perspective, if a hand-held laser pointer makes 1 mW in many jurisdictions, it’s illegal, because people have used them to blind airplane pilots and cause all sorts of chaos. The LaserCube is a Class 4 laser – the highest the safety classes go – meaning it can instantly burn skin and eyeballs, among other things. The Nominal Ocular Hazard Distance – the distance from which a 1,000-mW laser can damage your eye in less than a quarter of a second – is 733 ft (224 m) away. You can even hurt yourself looking at the point where the laser hits the wood as you’re etching it, it’s so bright.

Having said that, after a fair degree of online searching, I can’t say for sure whether it’s illegal to own and use a LaserCube in my jurisdiction. I can definitively say it’s a felony to let a corner of the “screen” drift off a building into the sky, and may the good lord help you if you accidentally light up a plane and get caught. Essentially, do your own research when it comes to your own home state, be super careful with this thing, and make sure either that everyone in the vicinity knows the deal before you turn it on, or that you mount it in such a way that it can’t fry any retinas – like 10 ft off the ground and angled upward.

If you want to take these things in a pro direction, you can hook multiple LaserCubes up to a single control computer if you like. You can create your own animations with software like MaxWell Synth, Modulaser or LaserShowXpress – it’s compatible with all of these – or even try uploading images and converting them to laser art … which has frankly sucked every time we’ve tried it, for whatever reason. You can grab a smoke machine and be a smartass by making laser harp strings float in the air, which you can use as a MIDI controller to make music.

Or, if you’re like us, you can simply put on some sweet electronic music and scroll through the preset animations, gawking like drooling chimps marveling at a fire dancer. It hits us on a level I’d describe as primal.

The LaserCube costs US$499 for the 800-mW version and $599 for the 1,000-mW version. Honestly I have no idea which one we’ve been testing, it’s not written anywhere on the device. You can pay extra for a carry case, a small ball-headed tripod, a gamepad (don’t bother!) and a few other trinkets.

This thing is an absolutely legendary toy to bring out at a party or any other time people are around. If you can stomach the risks, grab one – we’re absolutely hooked on it, as you can see from the video below.

In this article:LaserCube, smallest projector