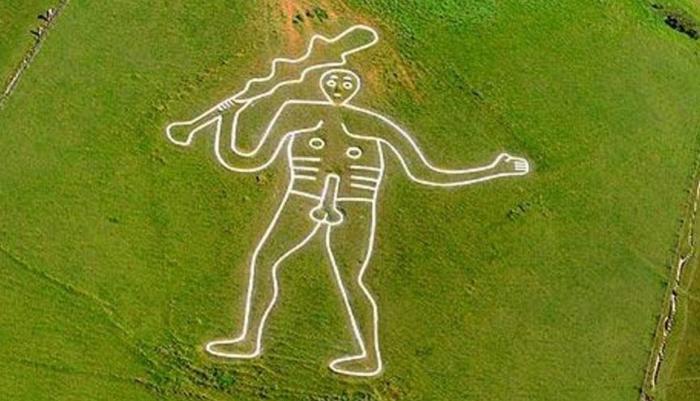 Phillip Toms of the University of Gloucestershire and his colleagues will study samples taken from the elbows and feet of the Giant of Cairn-Abbas, the famous geoglyph located in the English county of Dorset. Scientists want to clarify the age of this image.

The Giant was carved on a hillside near the present village of Cerne Abbas. Due to the removal of the surface soil layer, the Cretaceous rock was exposed, and as a result, an image of a naked man appeared. Its height is 55 meters, width – 51 meters (due to arms apart). In his right hand he holds a club with a length of 37 meters. Studies have shown that the giant had a cloak draped over his left hand.

The first mention of the Giant of Cerne Abbas in written sources dates back to November 4, 1694. In the “Reports of Church Ministers from St. Mary’s Church in Cerne Abbas” on this date it is indicated that three shillings were spent on the “restoration of the giant”. In 1734, the Giant was described by the Bishop of Bristol, who examined the local landmark during a visit to Cerne Abbas. Four years later, the giant was mentioned in a letter by the antique dealer Francis Wise, and in 1764 he was discussed at a meeting of the London Society of Antiquaries.

Scientists have not yet agreed on whether it appeared in the 16th century or was created earlier. There are currently three main theories. According to one of them, the Giant was carved in a hillside on the orders of the local Lord Denzil Holles and is a caricature of Oliver Cromwell. Halls and Cromwell, although both sided with parliament, were fierce political opponents, and Cromwell even put forward charges against Holz of clandestine ties with King Charles I, who was in besieged Oxford. The version of Halls’s connection with the Giant of Cerne Abbas is based on a report from the 18th century antiquary John Hutchins, who mentioned in a letter that the estate manager told him that “the figure was modern, carved in the time of Lord Hall”.

Proponents of another theory believe that the Giant dates back to Roman times. They note the similarity of the figure with the traditional images of Hercules , which became especially noticeable after the discovery of traces of the cloak (in this version the “cloak” is considered the skin of a Nemean lion). Finally, the third version connects the Giant of Cerne Abbas with Celtic culture. Its appearance is caused by the similarity of the Giant with the image of the Celtic god on the handle of the pan found in Hod Hill in Dorset, which dates from about 10-51 years of our era.

Current researchers intend to use optically stimulated luminescent dating, which allows us to establish how long ago sunlight was exposed to minerals for the last time. “It is likely that the tests will give us a range of dates, not a specific age, but we hope that they will help us better understand and take care of this famous landmark,” says archaeologist Martin Papworth.

Gordon Bishop, chairman of the historical society of Cerne Abbas, said that although some villagers “would prefer the age and origin of the Giant to remain a mystery,” most would like to know at least if he is ancient or only a few hundred years old.

Advertisement. Scroll to continue reading.
In this article:Dorset, Giant of Cerne Abbas