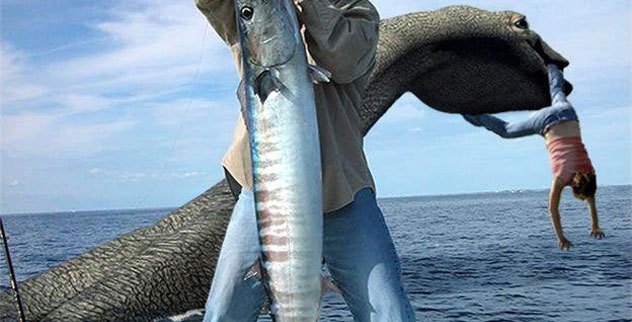 “Normally there’s no noise. It was different. Different. And so clear,” said Hall.

The Panton man is looking for a legend. He made headlines in 1985 when he claimed to spot the lake creature, known as Champ.

“Something made the noises and it’s totally amazing,” said Hall.

Since then, he’s been chasing Champ trying to record the mythical monster’s every move.

“Not hearing anything like I heard before,” said Hall

And now, Hall has teamed up with Katy Elizabeth, who runs the organization, “Champ Search.”

During recent surveillance, they say they made another surprising discovery.

“I was in total shock,” said Elizabeth.

A beluga whale in Lake Champlain.

The team used underwater audio testing equipment and claim they documented a rare vocalization used by only a handful of species to find food. None of which should live in a fresh water lake.

“Everything is pointing toward belugas or some other animal, not native to this lake that is in here feeding,” said Hall.

And Hall says he even saw something big, white and torpedo shaped nearby.

Reporter Darren Perron: Could this be true?

Bill Ellison: Well, it could be true. I think it’s a highly unlikely scenario.

He doubts a beluga whale could live in Lake Champlain. The closest any have officially been seen in recent years– the St. Lawrence Seaway near the Richelieu River. It connects to Lake Champlain. But Elliston says it would be a difficult migration through canals.

“Not only would they have a hard time getting here, but they’d have a hard time living here. They live in salt water. I think it’s really highly unlikely that a beluga whale could swim up the seaway, up the Richelieu River and Lake Champlain without being noticed by anyone,” said Elliston.

The mouth of the Otter Creek dumps into Lake Champlain. It is exactly a half mile from this point upstream where the researchers got their readings.

And the readings were taken about 8 miles from where a fossil remains of a beluga whale buried in clay soil in Charlotte. It was unearthed during railroad construction in 1849 and is now on display at the University of Vermont’s Perkins Geology Museum.

The fossil was left behind when this area was an extension of the Atlantic Ocean until the glaciers receded and the land rebounded. Whales and other sea creatures were trapped and died, but some species managed to adapt like Atlantic salmon.

“As far as I know belugas can’t do that,” said Elliston.

There’s also a recording captured by the Fauna Communications Research Institute in 2003.

A group of scientists searching for signs of Champ for the Discovery Channel recorded what sounded like a beluga whale as well.

“It’s interesting. If there are belugas in the lake, things are changing,” said Hall.

Hall says evidence is stacking up that something’s in the water and he now believes Champ may have company.

“Which is more far-fetched– champ or beluga? Something is making the noise,” said Hall.

Champ Search is sending their recordings to an expert for analysis.

Advertisement. Scroll to continue reading.
In this article:Champ, Lake Champlain